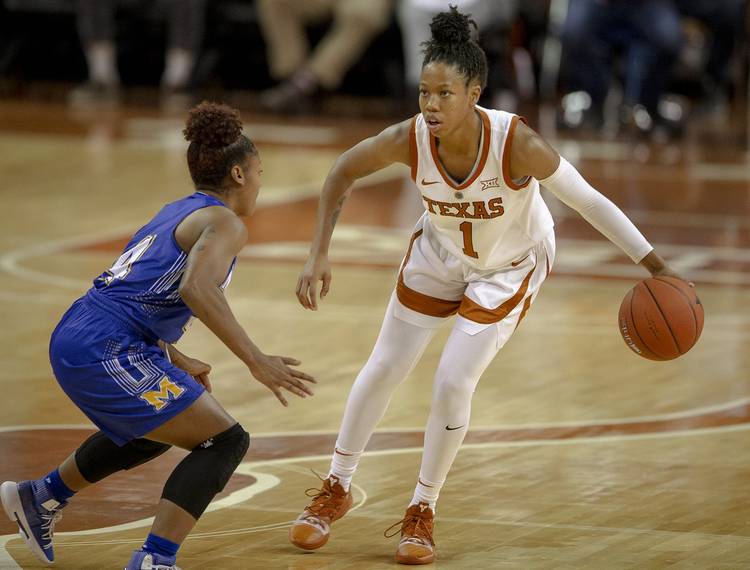 Texas guard Sug Sutton (seen in a game earlier this month) was the most valuable player as the Longhorns won the Gulf Coast Showcase. [NICK WAGNER/AMERICAN-STATESMAN]

ESTERO, Fla. — Sug Sutton needed a couple of minutes outside the victorious Texas locker room to figure out how to get her Gulf Coast Showcase MVP trophy back into its box.

Like every other challenge she faced over the weekend, she found the answer.

Sutton scored 17 points, Jatarie White added 16, and No. 10 Texas clamped down defensively late to beat Fordham 72-54 for the Gulf Coast title Sunday night, the Longhorns’ third win in as many days.

“It’s going to help us a lot,” Sutton said. “Everyone gave us a challenge … and it taught us just to push through as a team.”

Charli Collier scored 11 and Destiny Littleton added 10 for the Longhorns (6-0), who had 14 points off turnovers and 17 second-chance points.

“I really thought that tonight was a good gut test for us,” Texas coach Karen Aston said. “I do think Fordham is a good team, and I thought they executed. They gave us some fits from a matchup perspective.”

Kendell Heremaia added 17 for the Rams, who were outrebounded 39-19.

“I was super-proud of our kids,” Fordham coach Stephanie Gaitley said. “Everybody’s trying to find something about themselves in this tournament. We were fearless. There was no fear.”

The three-day weekend in Florida provided one test after another for Texas, which lost Lashann Higgs to a knee injury in the second quarter of its tournament opener Friday and needed to rally to top Quinnipiac. UT then needed to hold off a second-half rally by Michigan in Saturday’s semifinals and wasn’t in full control of the title game until the final minutes.

Cavanaugh’s 3-pointer at the buzzer gave Fordham a 23-22 lead after the first quarter, a period in which the Rams made 7 of 8 shots in one stretch and wound up shooting 69 percent — 63 percent from beyond the arc.

It was success that Texas wasn’t used to letting happen.

The Longhorns allowed opponents to shoot a combined 28 percent in the tournament’s first two games, 19 percent from 3-point range. But Fordham made five 3-pointers in the first quarter Sunday, one more than Texas had allowed in its most recent six quarters against Quinnipiac and Michigan combined.

Texas then settled in, taking leads of 39-28 at the half and 53-44 going into the fourth quarter. The Rams missed their first six shots of the final quarter — the ninth time in the three-game event that Texas had forced an opponent into an 0-for-5 stretch or worse — and were down 15 when Cavanaugh rattled in a 3 to end the drought with 5:59 left.

“It was a really good weekend,” Sutton said.

Next up for Texas is UT-San Antonio at 11 a.m. Wednesday at the Erwin Center.