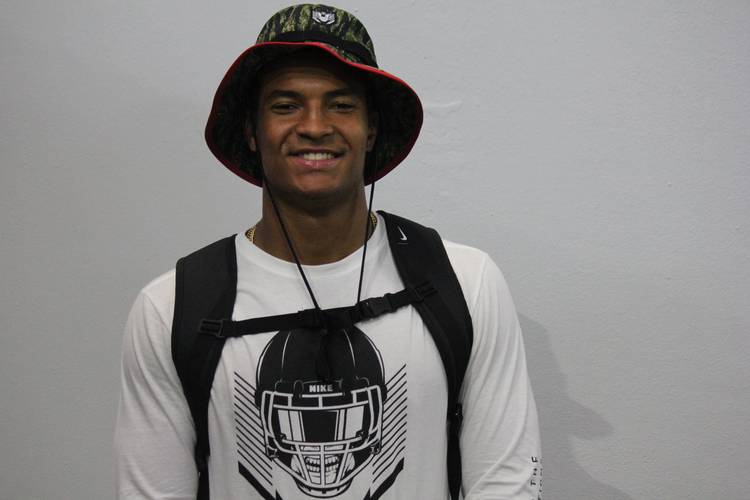 Texas isn’t done fishing outside of Texas waters for talent in the 2019 class. The biggest fish remain unhooked.

The Longhorns picked up two commitments last week and both were out-of-state defensive ends. Exactly half of Texas’ 22 commitments play prep football outside of the Lone Star State. Tom Herman hopes five-star Bru McCoy adds himself to the list.

McCoy is a 6-2, 212-pound athlete from Mater Dei High School in California. He’s the no. 1-ranked athlete in the country and the eighth-best prospect in the 2019 cycle. McCoy holds 25 offers and is set to pick a school on Jan. 5 in San Antonio during the All-American Bowl. McCoy is a two-way athlete, starring at both wide receiver and outside linebacker.

Official to Texas this weekend🤘🏾 pic.twitter.com/L0xiyd4Bs4

The battle for his services is seemingly a two-team collision between Texas and USC. The Longhorns’ stock is rising with an impending chance at a Big 12 Championship. USC is struggling. The other ace in the hole is fellow Californian and Texas pledge De’Gabriel Floyd. The two are close and Floyd is confident the two will play together in college.

“Bru is very athletic. He has great hands and is a smooth runner,” Floyd said. “Defensively, he gives all his effort on every play and is fast to the ball. He has great bend when he goes around the edge and is just tenacious.”

Another player who’d be considered an out-of-state commit is four-star running back Noah Cain. An asterisk would be placed next to it, however, as the IMG Academy (Fla.) product started his high school career at Denton Guyer before playing his last two seasons at IMG. Most of the 2019 class is in the bag and simply waiting on Dec. 19 to sign a national letter of intent. Floyd thinks Texas making it to the conference championship game makes the Longhorns even more appealing to the final targets.

“I’d have to think the success matters. This is what Texas is supposed to do,” Floyd said after the Kansas win. “My dogs did what they do, and they’re going to keep doing it.”

It doesn’t take a member of Mensa to realize the goal of recruiting is to sign the best group of players possible. There is no issue with the Longhorns extending the search for talent in a 2019 cycle that didn’t break their way early with in-state targets. The top talent in the state chose Texas in 2018. Recruiting is cyclical, and it was impossible to think the Longhorns would continue rolling through the state considering Jimbo Fisher was in his first full cycle at Texas A&M.

Texas was forced to do one of two things: Settle or explore. Herman chose not to settle and took his recruiting battles outside of the state. The gamble worked. The Longhorns hold 22 commitments, 11 of which reside outside of Texas, and that group ranks as the no. 7 class in the nation and the top class in the Big 12. No one can argue with those results.

It’s also disingenuous to suggest Herman and his staff anticipated going out of state for 11 players. The most Charlie Strong ever signed was 10 in 2015 and only eight of those guys made it to campus. If the Longhorns can land McCoy and Cain, that’s 13. Strong was crucified. Herman will be given a deserved pass.

Strong was a foreigner on the recruiting trail in Texas when he arrived in Austin. Herman’s ties to this state, and its coaches, goes back to his days at Sam Houston State. The two coaches don’t share the same track record, therefore they won’t share the same criticism.

This won’t be a trend. Sure, Texas will always search for unique talent like Jake Smith and De’Gabriel Floyd. It also hopes most of that talent can be secured within the borders of the state it represents on the front of the jersey. That matters to some, even if it shouldn’t.

It’s only Monday, but Texas-Oklahoma emotions are already stirring for their Big 12 rematch