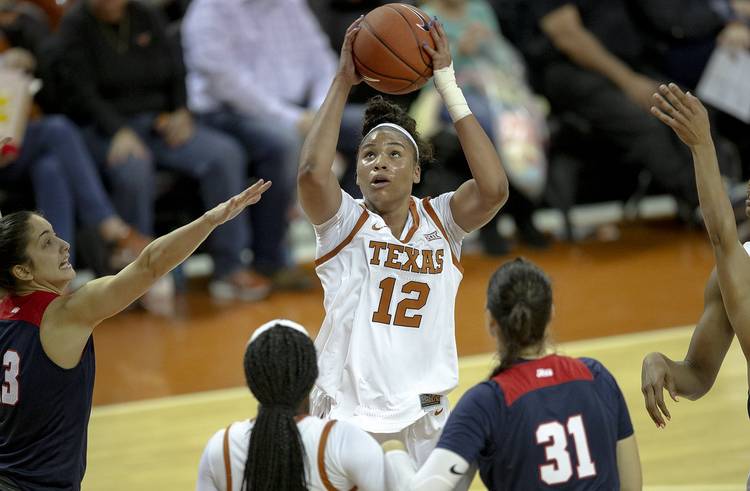 Texas guard Jada Underwood has stepped up in a starting role for Longhorns this season. [NICK WAGNER/AMERICAN-STATESMAN]

The season-ending injury to senior guard Lashann Higgs gives a few of her teammates an opportunity to show what they can do.

That was Texas coach Karen Aston’s message after learning the Longhorns’ leading scorer had suffered a torn ACL injury to her right knee in a tournament game against Quinnipiac last week in Estero, Fla.

Instead of bemoaning the loss of another player — forward Joyner Holmes and post Sedona Prince are still not ready to return from their injuries — the coach has confidence in a few newcomers that have impressed this fall.

Aston said the Longhorns “will miss Lashann and all the energy and experience she brings” but that there is hope on the horizon.

“Some people will look at us and say we’ve lost all three starting guards from last year (Higgs, Brooke McCarty and Ariel Atkins),” Aston said. “We can look at it as a negative or we can look at it as an opportunity. Already you have seen (point guard) Sug Sutton step up a lot. And we’ve seen a lot of growth from (shooting guard) Destiny Littleton in a short period of time.”

The 10th-ranked Longhorns (6-0) return to the court on Wednesday against UTSA (3-4) in the annual Forty Acres Field Trip at 11 a.m. at the Erwin Center. The Longhorns’ first big challenge of the young season will come Sunday when they host Mississippi State.

Among the newcomers who will see action are freshmen Audrey Warren and Joanne Allen-Taylor. Warren, who replaced Higgs in the starting lineup of Sunday’s 72-54 victory over Fordham in the finals of the Gulf Coast Showcase, scored 7 points and grabbed four rebounds in 27 minutes.

“Audrey’s an old-school type of player,” Aston said. “She’s got a little bit of a junkyard dog mentality.”

Among the unsung heroes for Texas is junior forward Jada Underwood, who joins Sutton and graduate guard Danni Williams as the only players that have started all six games. Underwood had played in 56 total games in her first two years wearing burnt orange, none as a starter.

Underwood said it was disheartening to see Higgs go down with an injury.

“Lashann is such a big piece to our success, but I think we’re going to get closer as a team, closer as a unit,” Underwood said. “We’re just going to try to play the season for her.”

The Dotted Line: What’s left for Texas to accomplish in the 2019 recruiting class?