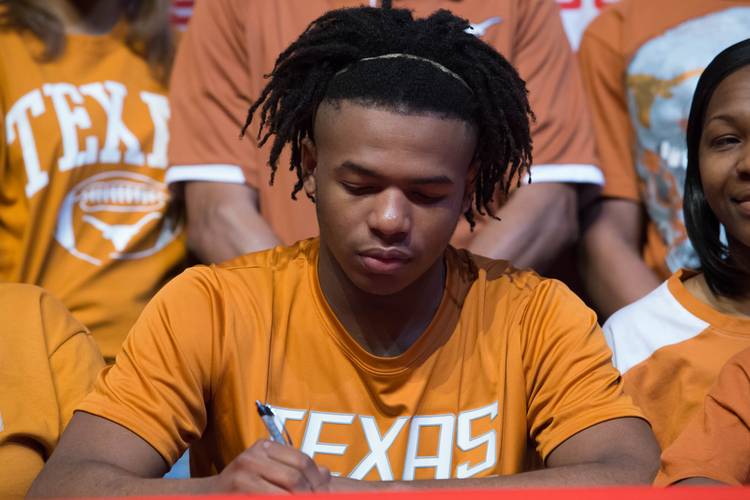 Carthage running back Keaontay Ingram signed with the University of Texas on Wednesday. The 13th-ranked recruit on the Statesman's 2018 Fab 55 rushed for 2,225 yards and scored 31 rushing touchdowns, but equally impressive was his 46 receptions for 475 yards and two touchdowns. (Mark Martin/ETSN.fm)

Gone are the days of three-hat Monte in February. That’s so 2016. The new rage begins in December when prospects can sign national letters of intent during a three-day period from Dec. 19-21. In December 2017, there were 21 prospects committed to Texas when the first early signing period debuted for the 2018 class. Nineteen of the 21 signed. Welcome to the new normal.

It’s the second year of the early signing period and don’t expect it to ever go away. Nearly 80 percent of Power Five conference commits chose the early signing period last December rather than wait until the traditional national signing day in February. That trend is expected to continue this year, specifically for the Longhorns — 20 of the 22 current commits plan to sign on Dec. 19. Six of those will enroll early in January.

Life is a double-edged sword. It comes with good and bad. Recruiting is no different. Split opinions exist about the early signing period. Coaches and players alike see the pros and cons of the situation. The three-day period was implemented to allow players to get the recruiting process over with and stop the frantic phone calls leading up to signing day.

“I think it’s really good, especially if you’re committed and you know for a fact that’s where you want to go,” said Houston Strake Jesuit tight end Thomas Gordon, a three-star prospect who’s committed to Northwestern. “It makes things more official. Also, schools can send workout programs for you to get started as soon as you sign.”

It allows for normalcy, also. The top-tier talent around the country is constantly bugged by coaches, peers and dorks like me until they sign on the dotted line. It’s the nature of the business. Signing early puts an end to the questions. It also creates opportunities for prospects further down the recruiting list.

“Focus moves to other recruits after the first signing,” said Conroe Oak Ridge assistant coach and recruiting coordinator Kevin Goodwin. “It also takes pressure off the top-tier players because they can go back to being normal students.”

There are detractors. Time becomes an issue, especially in Texas where the state playoffs run all the way until the weekend before Christmas. Carthage running back Keaontay Ingram was one of Texas’ two 2018 commits that chose not to sign early, mostly because he had a football game to play the day after the early period began. It’s a distraction, and it also speeds up an already fast process for teenagers.

“I think it’s a good opportunity for colleges to get the kids a chance to get on campus earlier,” said Austin Bowie wide receiver Elijah Higgins. “But it rushes the recruiting process.”

Then there is an issue of the late bloomers. The early period forces colleges to identify targets early, leaving out talented prospect who become stars as a senior. It happened with Texas defensive tackle Moro Ojomo, who exploded onto the recruiting scene after last year’s early period because every college needed a defensive tackle, and most were signed with other schools.

“At a place like Cedar Hill, juniors don’t get a lot of film, so we will have some kids with Power Five talent overlooked because your higher-level schools are now trying to complete their senior class before the early signing date,” said Cedar Hill assistant coach and recruiting coordinator D.J. Mann. “We had 10 schools visit us when the open period started this week, and nobody wanted to see our 2019 prospect list.”

That beef was echoed by multiple coaches. It’s a hindrance to the players who don’t start early in their high school career. The players benefit if they’re ready for the process to end. It also cuts out two months of possible research if a school threatens to move on to another prospect if a target chooses to wait until February. Like most rules, the reactions are mixed.

“I don’t hate it, but I don’t love it,” said Galena Park North Shore assistant coach and recruiting coordinator Joe Price III. “My feeling is that the senior evaluations become a myth under the early signing period because it forces colleges and players to make early decisions that can be good or bad.”

Safe bet? Despite what Las Vegas says, ‘being an underdog isn’t a part of that plan’ for Texas

Texas women blow past UTSA in a ho-hum effort before a vocal crowd, 98-54