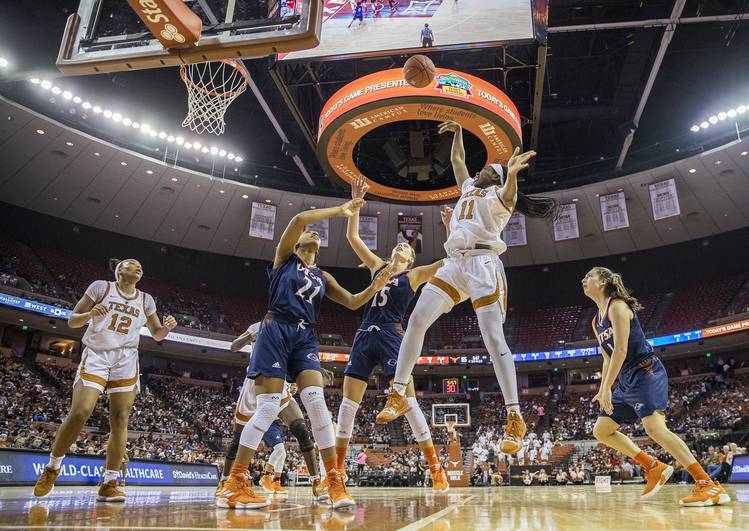 If you asked the 9,495 fans in attendance, they probably would have given the Texas women straight A’s after the 10th-ranked Longhorns’ 98-54 win over UTSA.

The teacher wasn’t quite as lenient.

Texas coach Karen Aston — although she was happy to get the win and thoroughly enjoyed the 7,500 schoolchildren in attendance — was hardly impressed. A 44-point victory hid a lot of blemishes that need to be cleared up.

“If you’re trying to become a championship basketball team,” Aston said, “you don’t  look at the other person’s jersey to decide how you’re going to play.”

Aston did not criticize anything specific about the game. The Longhorns (7-0) shot 50.4 percent from the field, won the rebounding battle 50-24, had a 19-11 edge in assists and turned the ball over just 10 times. Yet it did not look like the team that showed heart, cohesion and hustle while winning three games last  weekend at the Gulf Coast Classic in Estero, Fla.

Danni Williams scored 22 points to help Texas roll in the non-conference game. The Texas A&M graduate transfer had her most productive game yet as a Longhorn, hitting 8 of her 12 shots from the field, including four from behind the 3-point line. But the most memorable part of the game was the reaction from the school kids between the fourth and seventh grades from Austin and San Antonio who were part of UT’s eighth annual Forty Acres Field Trip.

“It would be absolutely wonderful if the gym could look like that every game we play,” Aston said.

Still, on the court, perhaps playing for the fourth time in six days had taken a toll on the players, she said. Or perhaps they let down because the Roadrunners aren’t in their class nationally. Either way, Aston wasn’t buying it. The Longhorns will need to upgrade the intangibles before hosting sixth-ranked Mississippi State on Sunday afternoon. It will be Texas’ first game against a ranked team this season.

Warren said her role did not change when Higgs went down with a season-ending knee injury last Friday.

UTSA coach Kristen Holt said the Longhorns have not dipped in overall talent from last year, but did find one big difference.

“We weren’t as afraid of the three-point shot that we were in the past when they had Brooke (McCarty) and some others,” Holt said.

Indeed, the Longhorns struggled behind the arc, hitting just 4 of 21 shots. Williams was the only UT player to make a three-pointer.

The Dotted Line: Even as Texas, others prepare for December, mixed feelings remain on early signing period

Butterflies aside, Texas freshmen are set for their first NCAA tournament run as Longhorns