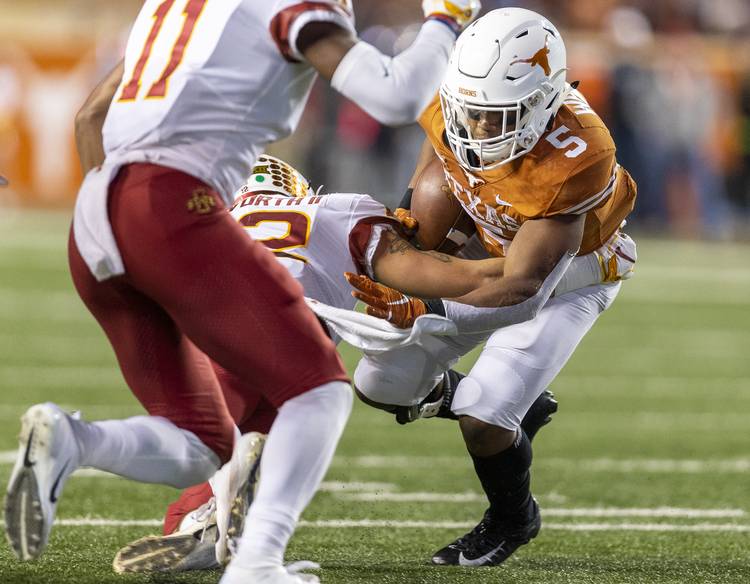 Texas running back Tre Watson (5) works to avoid a tackle by Iowa State defensive back Greg Eisworth (12) and defensive back Lawrence White (11) at Royal-Memorial Stadium on Nov. 17, 2018. [Stephen Spillman for Statesman]

This week’s notable number is 24 — the number worn at Texas by senior defensive back Jarmarquis Durst. Texas has scored 24 points in each of its last two wins. One of Hunter Lawrence’s school-record 24 field goals in 2009 beat Nebraska in the Big 12 championship game.

Twenty-four also accounts for the number of times that a Longhorns running back has been stopped behind the line of scrimmage this season.

Four Texas backs have logged a carry this season. Tre Watson, Keaontay Ingram, Daniel Young and Kyle Porter have combined for 326 carries. Of those, 276 have resulted in a gain. Those backs gained no yards 26 times. They’ve been dropped for a loss at a rate of 7.4 percent.

Watson has been the toughest to track down in the backfield. The graduate transfer from Cal has been caught for a loss on seven of his 154 carries. Ingram has 12 negative rushes among this year’s 129 totes while Young has earned negative yardage on five of his 42 attempts. (Porter scored on his only run of the year). From a running back’s perspective, Watson said the key to a lack of negative gains was running “north and south.”

“That’s the main thing, being able to make decisions, be decisive and hit the hole,” Watson said. “The O-line has done a great job this year, getting push off the ball, opening up seams. We break down a lot of film. We know where second-level, third-level defenders are expected to be.”

Providing protection for UT’s running backs has been an offensive line that has benefited from good health and consistency. UT coach Tom Herman noted this week that his line has started only six players and three combinations this season. Last year, the Longhorns started eight different lineups on its line. In 2016, that number was 10.

As far as keeping defenders away from the backfield, right guard Elijah Rodriguez credited the work that assistant coach Herb Hand makes the linemen do with a blocking sled. Left guard Patrick Vahe also said the linemen’s most important work was done in practice.

On Saturday, Texas will face an Oklahoma team that’s allowing 162.4 rushing yards per game. Over its past four games, Oklahoma has faced 110 carries by a non-quarterback. Four of those attempts have resulted in a loss.

As a team, Texas is averaging 156.4 rushing yards per game and 3.8 yards per carry. The running game’s longest gain was a 39-yard run by Watson against Iowa State. Ingram is responsible for the only 100-yard performance this year, although Watson ran for 93 yards on 14 carries two weeks ago.

“We definitely critique ourselves very hard, so it’s getting better,” Watson said earlier this month. “Over the weeks, it’s definitely getting better. We have a lot of room for improvement.”

Freshmen quarterbacks vs. Todd Orlando’s defenses — and the number 7