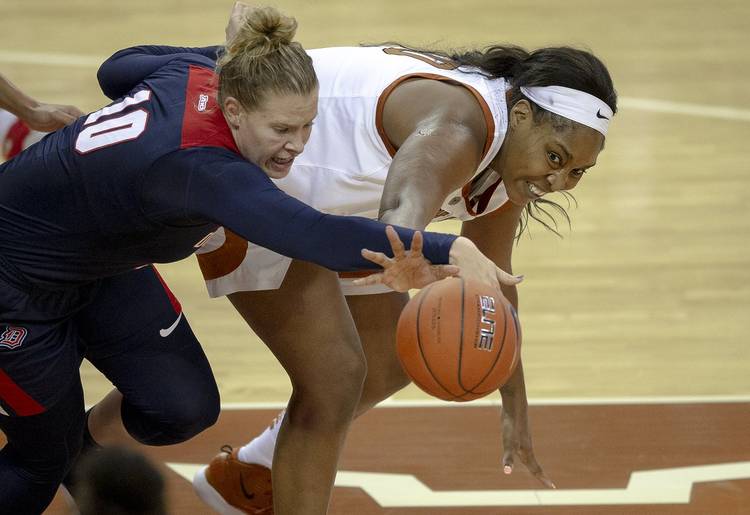 A lot has happened since Teaira McCowan made her first trip to Austin with the Mississippi State basketball team in 2016.

Shy and homesick, the 6-foot-7 freshman center scored four points and grabbed four rebounds in a 53-47 loss to Texas.

“I remember after the game, I was in tears because she was seeing her family (from Brenham) and didn’t want to leave them,” MSU coach Vic Schaefer said. “Getting back home as a freshman and being away, your heart goes out to the freshmen because you know it’s hard.”

Three years later, sixth-ranked Mississippi State and No. 10 Texas will meet again Sunday at the Erwin Center. Both sport 7-0 records, and this will be the first real test of the season for both teams.

McCowan has grown into one of the most talented players in the nation. She leads the country in blocks and is just 12 rebounds shy of breaking MSU’s career record of 1,108 set by LaToya Thomas from 2000 to 2003.

McCowan leads the Bulldogs in scoring and rebounding, averaging 19.4 points and 11.7 rebounds. The SEC preseason player of the year has also been named to the Lisa Leslie watch list for the nation’s top center, as well as watch lists for the Wooden, Naismith and Wade trophies.
Her individual matchups with 6-4 Texas senior Jatarie White and 6-5 freshman Charli Collier will go a long way in determining which team remains unbeaten.

Yet Karen Aston’s team has performed well with out them. Last week the Longhorns won three games at the Gulf Coast Showcase in Estero, Fla., and they are coming off a 98-54 victory over UTSA on Wednesday.

Aston said Wednesday’s final score was “insignificant” to her because she witnessed a lack of  “passion and connectivity” in the game. By stepping up in class against Mississippi State — and next Sunday against Tennessee — the Longhorns will need improvement in those areas just to be competitive.

Texas A&M transfer Danni Williams said she understands Aston’s comments. “We know we have to get back to work because nothing is going to come easily,” she said.

Schaefer noted that two of UT’s players used to play in the SEC — White (South Carolina) and Williams (A&M) — and “they will have a feel for what’s coming” on Sunday.

As for Texas, the Longhorns are still “a work in progress” and the team won’t know its true identity until the second half of the season. On a positive note, Aston said Holmes, an All-Big 12 first team pick two years ago, probably will return sometime this month.

Improvement will have to begin in practice.

“We’re not just going to show up on Sunday, flip a switch and get ready to play,” the coach said.

The Eyes of Texas: Four players to watch in Saturday’s Big 12 championship game