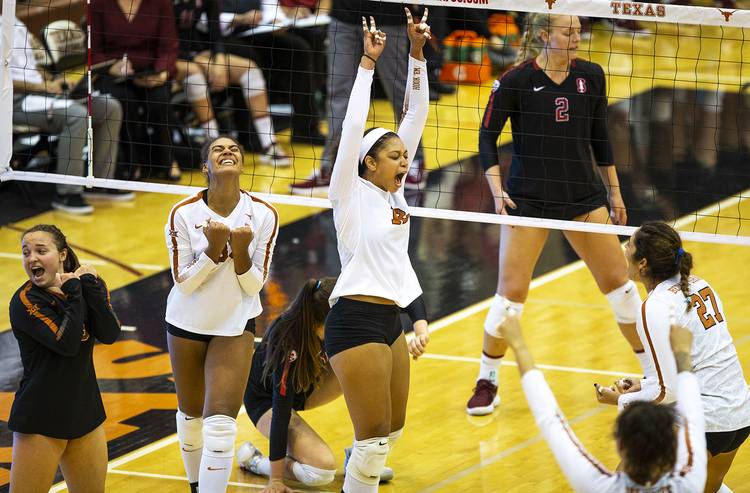 Had she taken a different route, the typical one, Logan Eggleston would be a high school senior right now in Brentwood, Tenn.

Instead, she accelerated her plans, graduating a year early to join a Texas volleyball team that she regarded as potentially special. Turns out that Eggleston, a 6-2 outside hitter, is a big reason why the Longhorns are special.

“I saw the team that was here and knew I wanted to be a part of it,” Eggleston, an All-Big 12 first-teamer, said. “I talked to the coaches, talked to all the girls, and they were super excited to welcome me.”

Texas (22-4) advanced to the Sweet 16 for the 13thstraight season while winning its 12thstraight match.

“To be in the Sweet 16 is special,” coach Jerritt Elliott said. “We don’t take it for granted.”

The Longhorns, seeded fifth in the tournament, will face Michigan in the next round. No. 4 BYU defeated Utah in Provo on Saturday so the Longhorns will travel to Provo next week. An upset by Utah would have switched the regional to Austin.

The Longhorns hit .425 overall against Texas State, their third-best accuracy of the season.

“We were just relentless all night,” Elliott said. “It was a complete game for us.”

Micaya White had 11 kills and hit .296. Yaazie Bedart-Ghani had eight kills and hit .636 in what might have been the final home match for her and fellow senior Morgan Johnson.

Texas State (27-7) completed a successful season in which the Bobcats won the Sun Belt and their first-ever NCAA match after nine previous defeats, beating Rice on Thursday.

But Texas, angling for its ninth Final Four appearance in a span of 11 years, is at a different level.

Junior Cheyenne Huskey, who transferred to Texas State from Florida this season, had six kills after pounding 23 versus Rice. The Bobcats hit only .113.

The Longhorns hit .500 in the first set. They scored 20 points before committing an error and made just one in the set. Eggleston and Bedart-Ghani each had four kills in the set, neither with an error.

The Bobcats were more competitive in the second set, trailing by 21-17 before Texas finished with a service ace by Brionne Butler, a kill crushed by White and a block by Bedart-Ghani and Johnson.

The Longhorns led 19-5 in the third set in which Eggleston had six kills.

The Longhorns defeated Texas State 3-0 on Sept. 6, but the games were closer than on Friday.

“We played them pretty well the first time,” Chisum said. “But I think they got some things together. They changed the little setter. She sets the middle better.”

That would be Jhenna Gabriel, the lightly recruited freshman from Honolulu who has started the last seven matches. Gabriel, considered small at 5-8, had 35 assists against Texas State.

“I saw her play, and liked the way that she moved,” Elliott said. “I liked her athleticism, her fire and her competitiveness. I knew that she was undersized. When she came on her visit, I told her ‘I don’t know if you can ever play.’ She said ‘coach, just give me one chance to prove myself.’

“Early on in the season she wasn’t very confident. But she got more and more comfortable and learned how to work hard. She puts our attackers in good positions.”

One of them, Eggleston, arrived just in time.

Editor’s note: This story was updated with information pertaining to the next round of the NCAA Tournament.

Texas faces first tall task of the season with No. 6 Mississippi State in town