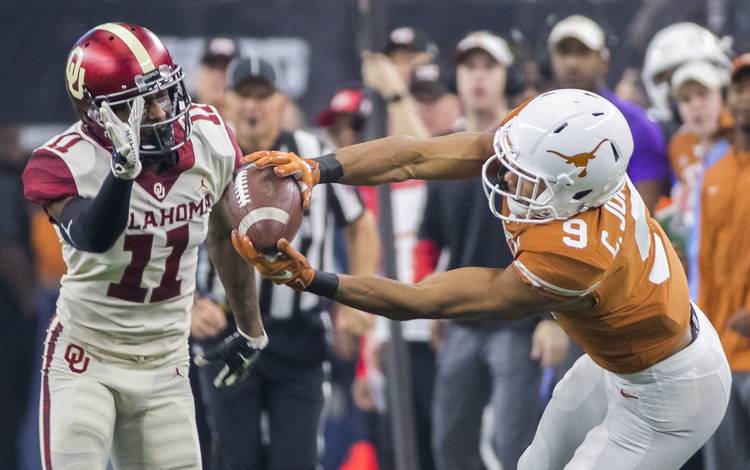 Texas wide receiver Collin Johnson (9) catches the ball for a first down against Oklahoma cornerback Parnell Motley (11) at the AT&T Stadium in Arlington on Dec. 1, 2018. [RICARDO B. BRAZZIELL/AMERICAN-STATESMAN]

ARLINGTON — Onlookers at AT&T Stadium could not tell Saturday that Texas junior Collin Johnson was omitted from the Big 12’s all-conference team this week.

Johnson led the UT passing attack with eight receptions, 177 yards and a 27-yard touchdown catch. The 177 yards were a record for the Big 12  championship game, besting a 142-yard outing by Oklahoma’s Malcolm Kelly in 2006. Oklahoma sophomore CeeDee Lamb also had a noteworthy 167-yard performance in the Sooners’ 39-27 win.

“Collin is an incredible athlete, and he’s done a lot of great things this year,” Texas quarterback Sam Ehlinger said. “We knew when the ball was in the air he was going to go get it. I was just giving him a chance, and he had a great day.”

Ehlinger said the Longhorns weren’t trying to pick on Oklahoma cornerback Parnell Motley. The 6-6 Johnson, though, was able to take advantage of his many matchups with the 6-foot Motley. Texas targeted Johnson 14 times and Oklahoma was eventually forced to double-team the UT junior. In addition to his seven catches, Johnson also drew two pass interference penalties (Texas declined one when he hauled in a 31-yard pass anyway).

Johnson’s record-breaking performance came three days after he did not receive a vote for the all-conference team. Six receivers earned first- or second-team honors, and Texas junior Lil’Jordan Humphrey was among the three honorable mention selections. Johnson’s 57 catches and 768 receiving yards, however, were overlooked among a deep crop of candidates.

On Saturday, he became the ninth Longhorn to record 2,000 receiving yards in a career. He fell 23 yards short of the third 200-yard game in school history.

Big ticket: The rematch between Texas and Oklahoma boasted an announced crowd of 83,114. That made Saturday’s showdown the most-attended conference championship contest in NCAA history. The 1992 SEC championship game between Alabama and Florida had a crowd of 83,091.

Texas and Oklahoma actually drew more fans for their traditional get-together at the Cotton Bowl. In October, 92,300 fans were on hand for UT’s last-second victory.

The combined attendance of 175,414 for those two games stacks up favorably against some of the nation’s total home schedules. There are 55 FBS-level teams — including Power 5 programs Duke and Kansas — that didn’t accumulate a total of 175,000 fans for all of their 2018 home games.

Coming back: Safety Brandon Jones is among the juniors who could flirt with the NFL in the upcoming weeks. Jones, though, told reporters after the loss to Oklahoma that he was leaning toward returning for his senior season.

Said Jones: “This is not a good feeling, in my opinion. I just want to be able to hopefully get back here and have different outcomes.”

Jones made the 22nd start of his career on Saturday. He has missed playing time with ankle and head injuries this year. The 6-foot, 205-pound safety has still accumulated 66 tackles, the fourth-most stops on the team.

Last year, six Longhorns declared early for the NFL draft. Of those, only Malik Jefferson and Michael Dickson remained with the team during its bowl preparation. Dickson, a punter, was eventually named the MVP of the Texas Bowl.