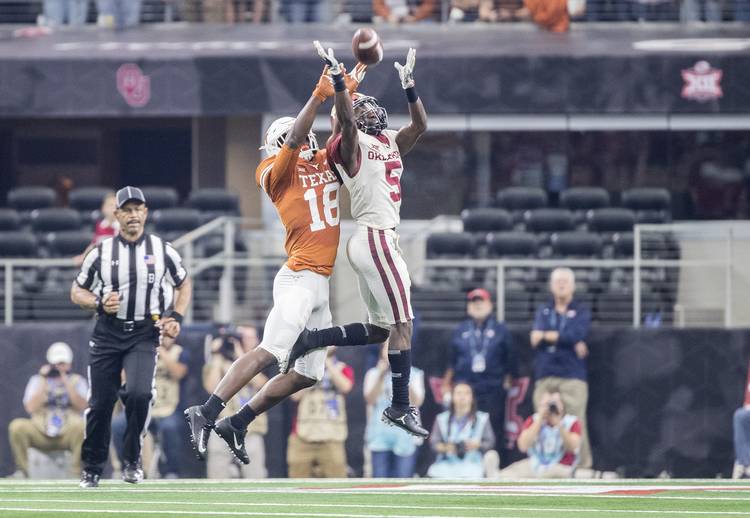 ARLINGTON — Revisiting our five pregame questions that were facing the Sooners ahead of Saturday’s 39-27 win in the Big 12 championship game.

2. Did Marquise Brown reel off a superstar play?

Brown, nicknamed “Hollywood,” was held in check. He caught five passes for only 54 yards. Statistically, it was his worst game since Oct. 27, when he was limited to two catches for 22 yards. He injured his left foot in the third quarter, got to the bench, then took a cart to the locker room. After the game, he was dressed in street clothes and using crutches. His left foot was in a boot; coach Lincoln Riley said he had no updates on Brown and would confirm only that the injury was to his lower body. Brown has been the top big play receiver in the Power Five. He had 11 catches for more than 40 yards coming into the game. Saturday, his longest catch was 24 yards. In the earlier game against the Longhorns, he caught nine passes for 132 yards and two scores.

3. Did 60 percent turn out to be a winnable number?

No. But the Sooners won, anyway.

Texas quarterback Sam Ehlinger completed 63.8 percent of his passes, so in this case, 60 percent was a perfectly winnable number from the Oklahoma defense’s perspective. This season, the OU defense has allowed 10 offenses to post at least 60 percent of their passes.

The Sooners got to 100 chunk plays, then ran past it. We’re talking plays of at least 20 yards. They had 99 coming into the game. Brown’s first catch of 24 yards got them to 100. The Sooners had six for the game, five in the first half. Coming into Saturday, the Sooners led the nation in this category and were 10 ahead of second-place Houston. OU had 117 a year ago.

Brown already had more than 1,000 yards in receptions before Saturday. But tailback Kennedy Brooks surpassed 1,000, though not by much. He’s now sitting at 1,021 for the year. After gaining 518 yards in his last three games, Brooks was held to 28 against UT. CeeDee Lamb also blew past 1,000 yards in receiving. He needed 118; he got 167. And two more OU stars are close — tailback Trey Sermon, through Saturday, has 928 yards rushing, while Murray now has 892 yards rushing.