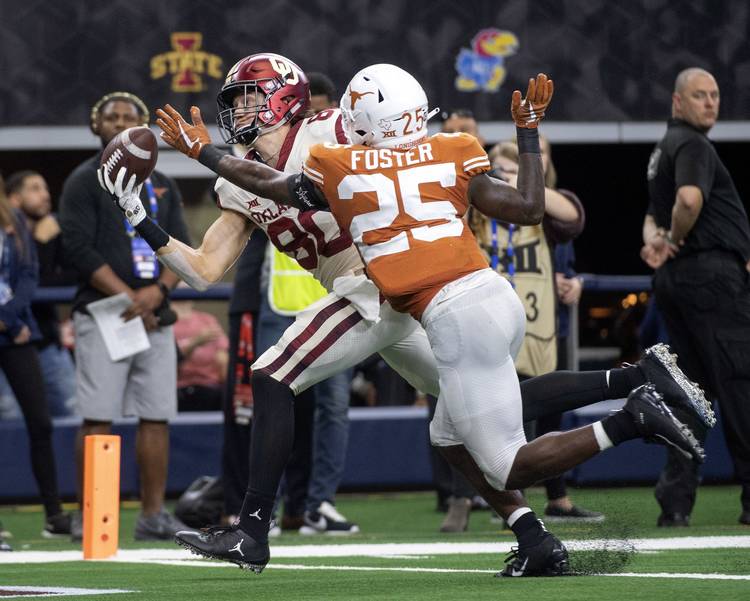 ARLINGTON — There were 143 snaps taken in the Big 12 championship game, in which Oklahoma beat Texas. Here are five that ended up making a big difference:

For the eighth time this season, Texas scored on its first possession. A 16-yard touchdown run by Texas quarterback Sam Ehlinger, however, was quickly muted by the short field goals Oklahoma kicked on its first two drives. But the Longhorns seized a 14-6 edge when Ehlinger scored on a 3-yard run with 11 minutes, 22 seconds left in the second quarter.

Ehlinger’s second touchdown was set up by a fourth-down conversion. Faced with a fourth-and-4 at the Oklahoma 38, Texas kept its offense on the field. Ehlinger connected with receiver Collin Johnson on a 23-yard pass.

For the season, Texas is 10-for-13 on its fourth-down conversions. That success rate of 76.9 percent ranks second nationally. The Longhorns were 3-for-3 on fourth down in their two games against the Sooners in 2018.

Oklahoma burned all three of its first-half timeouts in the opening quarter, putting the Sooners in a precarious position just ahead of halftime. Trailing 14-13, OU had the football at its 20-yard line with only 59 seconds left. Even though the Sooners were set to receive the kickoff after halftime, they remained aggressive.

Oklahoma drove 80 yards in just 41 seconds, and Grant Calcaterra capped the first half with a 6-yard touchdown catch. Quarterback Kyler Murray completed all four of his passes on the five-play drive. Texas defensive lineman Breckyn Hager also committed a clock-stopping facemask penalty on the drive. It was one of a season-high 13 penalties drawn by UT on Saturday.

Oklahoma pieced together an eight-play touchdown drive after the halftime show, and Texas faced its largest deficit since halftime of the Oklahoma State game Oct. 27. The Longhorns, though, rallied behind Ehlinger’s third-quarter touchdown tosses to Johnson and Lil’Jordan Humphrey.

Both catches were notable. With his 27-yard grab, Johnson broke the Big 12 championship game’s receiving record. (Johnson would finish with 177 yards on eight receptions). Humphrey’s 5-yarder was his ninth touchdown catch of the season, a statistic that has been recorded only eight other times in the school’s history.

In their two games against Oklahoma this season, Johnson and Humphrey combined for 30 catches, 442 yards and four touchdowns. Humphrey also threw a short touchdown pass to Johnson on Oct. 6.

Murray and Ehlinger threw for 728 yards at AT&T Stadium on Saturday. Yet the game’s biggest play was made by a defensive back.

Texas trailed 30-27 in the fourth quarter, but a Sooner turnover inside the UT 10 put the Big 12’s title trophy back in the Longhorns’ sights. With Texas dropping to pass on a second-and-11 from its 7, Oklahoma sent cornerback Tre Brown on a blitz. With Ehlinger looking to his left on a play-action pass, he never saw Brown approaching from his right. Without hesitation, the quarterback was dropped in the end zone for a safety.

Tre Brown on the corner blitz for the safety. What a call. pic.twitter.com/vmBi7XsuqA

Brown’s safety put Texas in a 32-27 hole with 8:27 remaining. By rule, the Sooners also got the football back. With Texas needing to either get a stop or hold Oklahoma to a field goal, Murray guided the Sooners on an 11-play touchdown drive. Oklahoma made three third-down conversions along the way.

The final one was the costliest for Texas. On a third-and-10, Murray lofted an 18-yard pass, and Calcaterra beat safety B.J. Foster to it.

Calcaterra’s one-handed snag sealed the victory for OU with 2 minutes remaining. It also came with a bit of controversy. As college football analyst Chris Fowler pointed out online, the play should have been nullified because the Sooners were lined up in an illegal formation.

Was pointed out to me and then verified by ⁦@CFBRulesExpert⁩ that OU’s TD (amazing catch) to go up 12 late was on an illegal formation. Only 6 men on the line. Top WR a yard off the ball. Oops. pic.twitter.com/vhRiMRq1mv