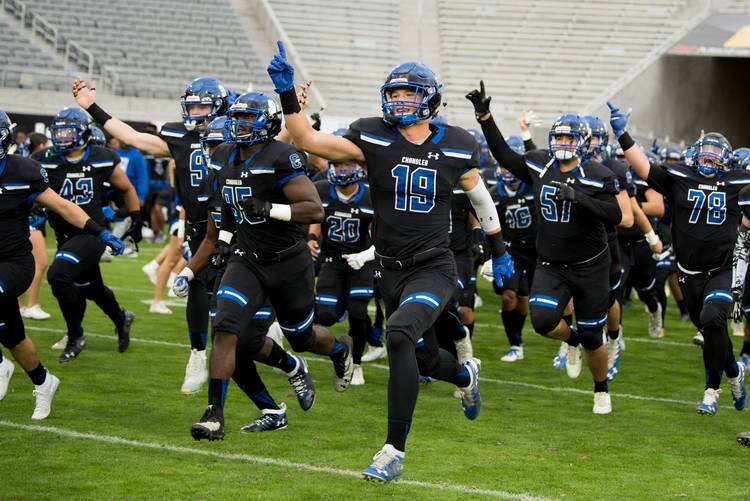 TEMPE , Ariz. — Brayden Liebrock has gotten used to ending a season with a smile on his face and a trophy in his hand.

In fact, Liebrock won more games in his high school career — 50 — than the Longhorns have in the past seven years combined .

If there’s anyone in Texas’ 2019 recruiting class who can come to Austin and continue to reestablish UT football’s winning culture, it’s Liebrock.

“I feel like there’s that confidence that you expect to win,” Liebrock said. “You never expect to lose. That’s something a competitive athlete doesn’t do. I feel like that’s an edge I’ll have.”

Don’t mistake Liebrock’s confidence for cockiness. He’s an unselfish player who just wants the best for Texas and his future teammates.

Liebrock was able to watch the Big 12 championship game before he suited up for his title game. He wasn’t thrilled with the result, naturally, but it reassured him that Texas isn’t far off from returning to its elite status.

“I was super proud of Texas this year,” Liebrock said. “Getting to the Big 12 championship game was an awesome goal.”

Liebrock will certainly be used to being surrounded by high-level talent upon his arrival in Austin.

His high school quarterback will play at BYU and his running back, who had more than 300 rushing yards and six touchdowns in the state final, will suit up at Cal.

Several other players on his team, which won the state final by 37 points, will play football at the next level.

“We had so much talent that it was so hard to match up against us,” Liebrock said. “Those guys pushed me in practice and I love those dudes. They definitely helped prepare me for the next level.”

Liebrock’s game more closely resembles that of a wide receiver than a tight end at this point. At 6-5 and 220 pounds, he knows he’ll have to put on weight if he wants to become a better blocker and an overall better tight end.

His pass-catching abilities are elite though, and he knows it. Take two sequences from the second half of the state title game as evidence.

First, he lined up in the slot, ran a crossing pattern and caught a pass for 24 yards while juking a pair of defenders.

The only thing that kept him from the end zone was the sideline.

A drive later, he found the end zone. Lining up as a lead blocker, he slipped across the formation for an easy touchdown catch.

He considers his closest player comparison Travis Kelce, the Kansas City Chiefs’ tight end who is one of the NFL’s best receivers at the position.

“I’m a flex tight end,” Liebrock said. “I know I need to gain some more muscle and be more of a blocking threat if I want the opportunity to prove myself at a big program like Texas.”

Liebrock intends to sign early and arrive on campus following the spring semester.

He maintained that he’s still “one-thousand percent committed” to the Longhorns seven months after pledging to Texas. He ranks as the 247Sports composite ratings’ No. 169 overall national recruit. He’s the fifth-rated tight end in the class and the No. 4 recruit in the state of Arizona.

He racked up 23 offers but his only other official visit was to Arizona State, whose stadium was where he won the state title.

“I love the University of Texas and I’m still super excited that I’m committed there,” Liebrock said. “It’s where I want to be.”

When Liebrock arrives in Austin, he knows he’ll have to start at the bottom and work his way up like he did at Chandler.

If he’s able to experience anywhere near the same level of team success he experienced in high school, both he and Texas will be very happy.

“I want to stand up and be a leader once I work my way up the ranks,” Liebrock said. “I just want to create opportunities for myself there.”

In first game since the Radford loss, Texas men seek to move past their offensive ‘stubbornness’