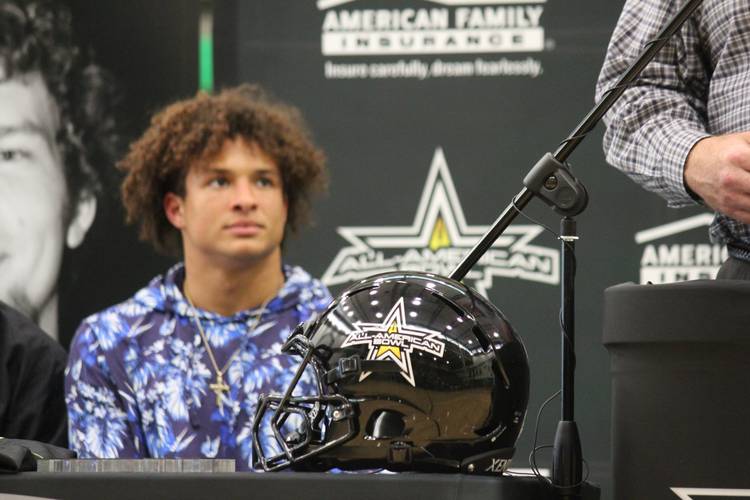 CUERO — Jordan Whittington was beaten on a route. It was the final game of the 2015 regular season and the future four-star product needed to make a play. The receiver had passed him and the ball was in the air. That’s when the glimpses of the future arrived.

“He gets beat on a route and makes it up and one-hand intercepts the pass like Odell Beckham Jr.,” recalled Cuero head coach Travis Reeve. “He was just a freshman and already looked like a Greek God. The opposing coach from Jourdanton texted me on the way home and couldn’t believe we had him for another three years.”

Flash-forward three seasons and Whittington is one of the top two-way stars in the state. He starts at wide receiver and safety for the undefeated Gobblers. He’s committed to Texas to play receiver, though he sees his role evolving into a jack-of-all-trades player as a Longhorn.

“Think Alvin Kamara with the Saints — some slot receiver, some running back, some returns,” Whittington said. “Really, whatever is needed of me in that offense. Versatility is something I pride myself on as a football player.”

Whittington was awarded All-American status on Monday. He’ll participate in the All-American Bowl, formerly sponsored by the Army, on Jan. 5 in San Antonio. The No. 4-ranked player on the 2019 Fabulous 55 was all smiles as he was given the jersey in a presentation at the Cuero gym in front of his family and teammates.

“It’s something I started dreaming about in eighth grade when I watched the game,” Whittington said. “It’s a dream come true. I worked hard for this goal and it came true.”

It’s a nice cap to a tough senior season for Whittington. He suffered a severe groin injury that kept him out for eight months. The self-described gym rat struggled to cope with the severity of his injury and the amount of off time at his disposal.

“It was tough mentally. Your body is used to working out all the time and I was out for eight months. That was my first major injury,” he admitted. “It took a toll on my mind.”

More high school football remains for Whittington. He and T’Vondre Sweat are the only two in-state UT commitments still alive in the postseason, as is 2020 quarterback commit Hudson Card and Lake Travis. Cuero takes on Geronimo Navarro Friday night in San Antonio. The Gobblers are three wins away from a state title.

“This is a great time for our community. We’re one of eight teams left in the playoffs and we’re chasing a dream,” Reeve said. “We’ll get to drive just up the road and watch Jordan live out one of his dreams in January in San Antonio.”

In first game since the Radford loss, Texas men seek to move past their offensive ‘stubbornness’