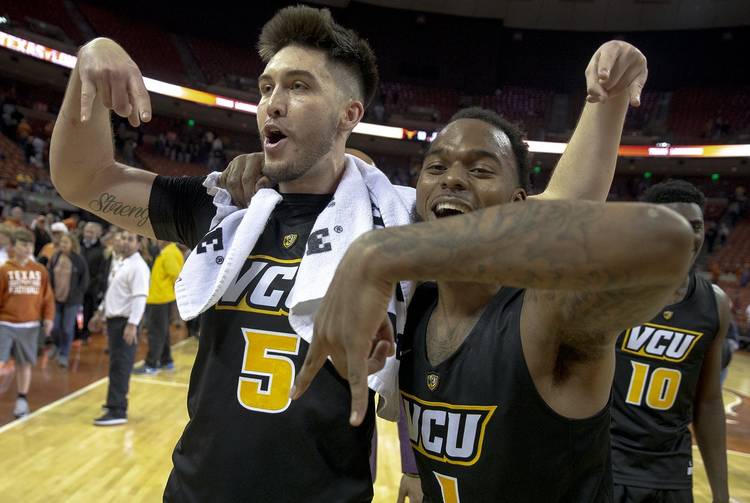 The Longhorns, as senior Dylan Osetkowski said, need to “trust the process.”

There needs to be “more sense of urgency, compassion,” guard Matt Coleman III said. “We lose three now, you don’t want to lose four. Urgency is there.”

By all accounts, this year’s group would run through a brick wall if Shaka Smart asked them. “It’s not like our guys are not trying hard,” the coach said. A lack of urgency, effort, compassion — choose whatever buzz word you like — is not, nor has ever been, the issue.

Texas, having dropped three straight after beating No. 7 North Carolina on Thanksgiving, simply cannot shoot the basketball. Not with any level of consistency, at least. It’s a program-crippling problem.

The Longhorns (5-3) shot 41.5 percent against the Rams. That sounds good at first glance. But Smart’s crew was 4 of 17 from 3-point range and missed two wide-open, potentially game-winning shots in the final minute.

Courtney Ramey missed from the left wing with 40 seconds left, and Coleman missed one just before the buzzer. Complicating things was that Kerwin Roach II, the senior leader, was 1 of 11 overall. This after he went 2 of 12 in last Friday’s stunning loss to Radford.

“I honestly don’t have an answer for that,” Roach said. “As a team, we looked at my shots. Matt even called me out on some poor shots. Every night, I’m here from 9:30 to 12 just shooting the ball. Eventually it will click. But right now, it’s just not clicking.”

Here’s a sobering thought for Smart: What if it doesn’t get better? What if this team, now shooting a Big 12-worst 40.5 percent, is what it is?

“That’s a very fair question,” Smart said. “The only positive response I have to that is I’ve seen these guys be much better. I’ve seen them make more shots. I’ve seen them make the right play, better than they did tonight. My job is to find a way to help them be the best version of themselves in the game when it matters most. We haven’t had that the last 2 1/2 games.”

Smart seems truly mystified, like everyone who watches this team. These last two losses to Radford and VCU were just as embarrassing as those two non-conference home clunkers against UT-Arlington and Kent State two years ago. But this is different.

What’s troubling is that the Horns actually tried to take more mid-range jumpers instead of settling for threes. It still didn’t work.

Osetkowski, who didn’t take a single 3-point shot, backed one defender all the way into the paint. He finished with seven points and nine rebounds. As for his dribbling and three turnovers, well, one crisis at a time. Jericho Sims had 14 points on 7-of-9 shooting with a few dunks and low-post buckets.

But Kamaka Hepa (2 for 4, all from long range) has yet to do anything more than try 3-pointers. Ramey (0 for 3, all from downtown) does little more than shoot threes. That’s supposed to be Jase Febres’ job. He was 2 for 6 overall against VCU and 1 for 3 from 3-point range.

“Maybe after a game like tonight, they’ll finally have the ability or willingness to say I don’t care what anybody thinks; I’m just going to let my hair down and attack,” Smart said.

VCU’s fans, who showed up in force, could be heard rattling the Erwin Center walls with chants of “V-C-U!” afterward. Smart is four seasons removed from leading VCU’s program but thumping him still carries importance in Richmond.

“It’s not about beating Shaka, honestly, “ said Rhoades, Smart’s former assistant. “I wouldn’t allow anybody to go that way. That’s not VCU. VCU’s won a lot of games against high majors and we’ll do it after I’m gone. That’s VCU basketball.”

Rhoades called it a “rock fight,” basketball code for a slow, ugly game. The closing stretch sure qualified.

Texas had three consecutive turnovers at one point. The Horns were within one point with less than four minutes to play. Then Coleman threw a pass that went straight through Jaxson Hayes’ legs for a turnover. Hayes was called for a charge trying to go over the top of Marcus Santos-Silva.

UT’s defense forced a shot-clock violation with 53.3 seconds left. Trailing by one and getting at least two possessions to score should be no problem for a well-schooled college team. For Texas, it’s painful to watch.

The Dotted Line: A trio of future Longhorns remain in the Texas high school playoffs