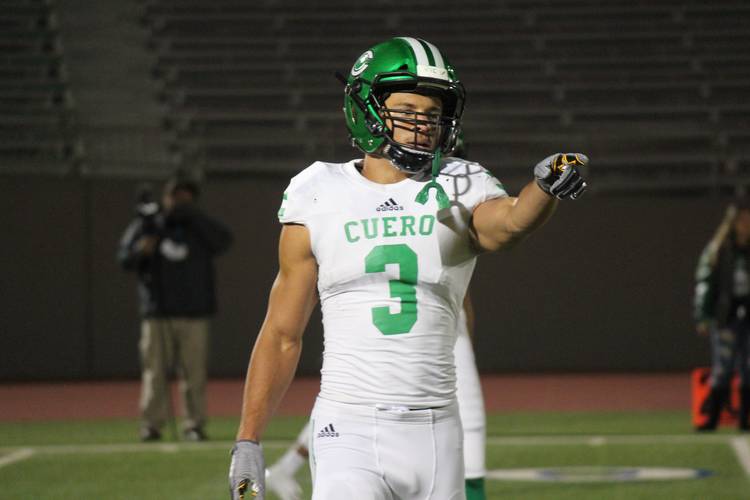 Cuero wide receiver Jordan Whittington in the bi-district round of the state playoffs. (Mike Craven)

Texas holds 21 commitments in the 2019 class and two for 2020. Only three of those players remain in the Texas high school state playoffs. Out-of-state pledges Marcus Washington and Brayden Liebrock capped off their prep careers with state championships in Missouri and Arizona, respectfully, last weekend. Eight teams remain in each bracket in Texas.

Three games separate each player from a title. Four-star wide receiver Jordan Whittington and Cuero are favored to win Region IV of Class 4A Division II. A stern test awaits Whittington and his teammates.

He was awarded his All-American Bowl jersey on Monday. He starts at wide receiver and safety for the Gobblers.

Huntsville is on a surprising run in Class 5A Division II in Region III. Three-star defensive end T’Vondre Sweat is a major reason for the success. He’s in line for district defensive MVP honors and helped his team beat Marshall by one point in the third round.

Lake Travis quarterback Hudson Card is one of just two commitments in the 2020 class. He hopes to revenge the loss in the 2017 state title game with another long playoff run. The contest against Converse Judson on Saturday is perhaps the most anticipated clash of the round.

No commitment in the 2019 class put up the numbers that four-star wide receiver Jake Smith produced as a senior. Last year the Scottsdale Notre Dame Prep  product became the first player in Arizona to rush and receive for more than 1,000 yards in the same season since Christian Kirk in 2011. Smith backed up that performance by leading his program to consecutive state title appearances.

As a senior, he recorded 1,112 yards and 22 touchdowns on 64 receptions, adding 741 yards and 15 touchdowns on the ground. He returned two kickoffs for touchdowns and registered 20 tackles and 4.5 sacks. This was good enough to be named Gatorade’s Arizona player of the year. He’s among three finalists for the Gatorade national player of the year along with cornerback Derek Stingley Jr. and junior quarterback D.J. Ulagalelel.

Smith is one of three wide receivers pledged to the Longhorns in the 2019 class.