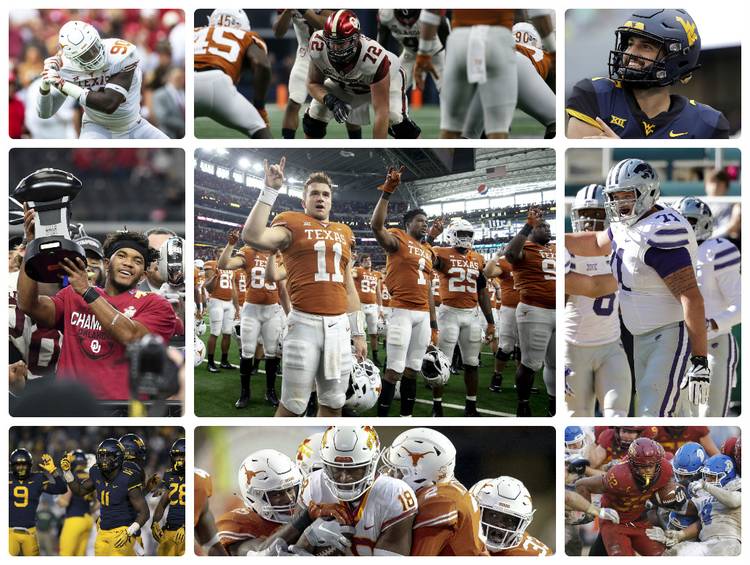 This year's 12 best overall players in the Big 12 were mostly quarterbacks and wide receivers, the combos that have made the conference the top offensive league in the country. (Staff and wire photos)

Can the Big 12 change its name to WRU?

Seriously, there are so many quality receivers in the league that it’s difficult to name them all in a who’s who list of the conference’s best players. There are seven Big 12 wideouts who already have 1,000 receiving yards for the season, with another two or three possibly getting there with a nice outing in their bowl games. Another one is on the cusp, but is out for the bowl game because of surgery.

Want some context for how these numbers compare to every other league’s best group of wideouts? Only 18 Power Five receivers have crossed the touted 1,000-yard benchmark for excellence. That means the Big 12 comprises nearly 40 percent of the national total.

Six conference receivers rank among the top 10 nationally for most 50-yard catches, the in-your-face, slam-dunk plays that can flip the momentum.

But before we go on and on about the receivers, let’s quickly acknowledge the league’s quarterbacks. They dominate the top of our annual postseason Big 12 of the Big 12 list of the conference’s 12 best players regardless of position.

Oklahoma’s Kyler Murray could be the best player in the country. He’s a Heisman finalist, the Davey O’Brien winner as best quarterback and the Associated Press player of the year. So of course he’ll be the top player on our list.

He also was there on our midseason update, but was not among the top 12 when we revealed the original list in August. It was hard to project how well Murray would do since he’d always been the backup in Norman.

Murray has several signature plays. He looks like a graceful ballroom dancer easing past a rush, staying upright long enough to throw deep downfield. Or maybe he’ll be drifting back in the pocket, only to click into warp drive for a called draw. He puts the multi in the athletic quarterback category. Murray is the first quarterback in FBS history to average 300 yards passing and 60 rushing a game.

West Virginia’s Will Grier would be the marquee quarterback in most any other league. Last we saw of the main Mountaineer was Nov. 24 when he torched Oklahoma for 539 yards and four touchdowns. He was the 12th Big 12 quarterback to throw for more than 500 yards in a single game in league history. Grier topped this list in the preseason, but Murray’s dazzling play dropped him a notch on the list.

Then there’s Texas’ Sam Ehlinger, who quarterbacked the Longhorns to a spot in the Sugar Bowl. His play was so clean that he didn’t throw an interception for 308 straight attempts, a conference record streak that covered 10 games.

But the quarterbacks wouldn’t be their scene-stealing selves without their receivers. And this year’s Big 12 class of wideouts is fierce.

Marquise Brown probably is the best of the bunch. The Sooner known as “Hollywood” could go 50 yards as easily as he could pick up 10. He’s projected as a first-round pick in next year’s NFL draft. If a defense successfully takes out Brown, like Texas did in the Big 12 title game, CeeDee Lamb usually is open. He’s the only receiver in the country with a pair of catches longer than 80 yards.

Oklahoma’s Tylan Wallace was a finalist for the Biletnikoff, the award for the nation’s top receiver. His 59 catches for 10 yards or more is best in the nation. And, most important for the Cowboys, Wallace successfully filled the void left by James Washington, the 2017 Biletnikoff winner.

Texas could sport two 1,000-yard receivers for the first time in a decade. Lil’Jordan Humphrey already is there with 1,109. Collin Johnson is 55 yards away. That would give the Longhorns the second set of 1,000 yarders this side of Oklahoma.

Our list has to include more than just quarterbacks and receivers. Here’s the way we rank them:

Murray likely will break the single-season NCAA record for pass efficiency. Going into the CFP semifinal against Alabama, he’s at 205.72. The big question: Will he head straight into pro baseball or dabble with the NFL draft? He wasn’t definitive this week. Stats that matter: 4,945 total yards, 51 total touchdowns, quarterbacked OU to a Big 12 title and another CFP berth.

His 37 touchdowns, nationally, are behind only Ohio State’s Dwayne Haskins (47) and Murray (40). Grier has played two fewer games than the two Heisman finalists. Stats that matter: Passed for 3,864 yards with 37 TDs and 8 interceptions. Completed 67 percent of his throws and averaged 351.2 yards per game.

The sophomore has accounted for 38 touchdowns. His 13 on the ground lead the Big 12 among all runners. Nationally, the only Power Five quarterback with more rushing touchdowns is Syracuse’s Eric Dungey. Stats that matter: Had 3,541 yards of total offense and produced 38 touchdowns passing (25) and rushing (13) combined.

He was a unanimous all-conference selection as picked by media. He also was a finalist for Campbell Award, the academic Heisman. Stats that matter: The Wildcats junior has been a fixture at right tackle, coming off an All-American season. Graded out at better than 90 percent.

He’s posted six games of at least 131 yards. His 243-yard night against West Virginia was his best outing. Stats that matter: His 75 catches for 1,318 yards and 10 touchdowns were tops for the Sooners. He averaged 101.4 receiving yards a game.

Like Wesley, he had to deal with three starting quarterbacks. Stat-wise, he was a big-play receiver for all three. Stats that matter: 51 catches for 1,126 yards and 9 TDs. He averaged 22.1 yards per catch and 93.8 yards per game.

He was the top performer for a line that was viewed as one of best in the country. Stats that matter: Interior lineman paved the way for one of college football’s most prolific offenses.

Here comes No. 9 Tennessee, and the Texas women are looking to get physical in traditional matchup

Purdue isn’t a must-win game for Texas, but it sure feels like it