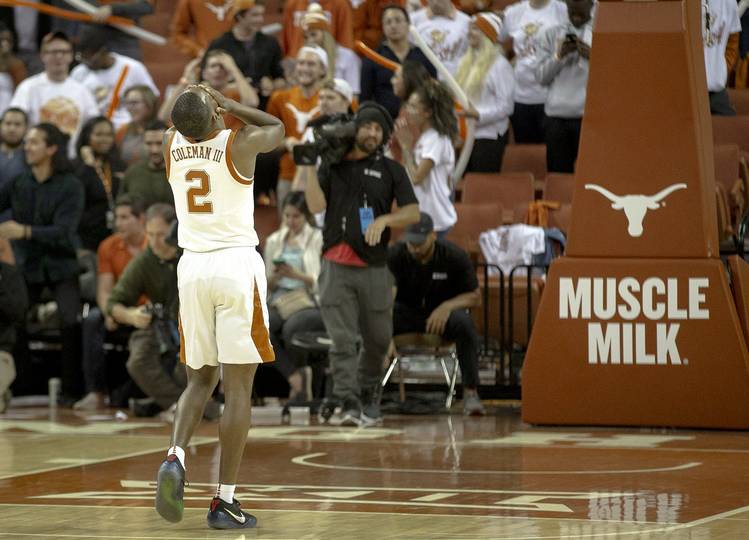 Texas guard Matt Coleman III (2) reacts after missing what would have been the game-winning shot in an NCAA college basketball game against Virginia Commonwealth in Austin, Texas, on Wednesday, Dec. 5, 2018. [NICK WAGNER/AMERICAN-STATESMAN]

Even Texas players couldn’t believe some of the final numbers from Wednesday’s loss to Virginia Commonwealth.

Simply from a defensive perspective, the Longhorns should have run the Rams straight out of the Erwin Center. VCU shot 28 percent and went 1 for 11 from 3-point range in the second half. Even worse, VCU made only three field goals in the last 10 minutes, 3 seconds.

Yet somehow, the Horns were on the wrong end of a 54-53 decision for their third straight loss.

“That’s the demoralizing part,” guard Jase Febres said. “We came back to the locker room and coach was telling us that we did what we needed to do on defense. Not being able to put the ball in the basket just hurts.”

Nobody inside Cooley Pavilion wants to label Sunday’s game against Purdue (6-3) as a must-win, but it sure feels like it. No offense to Radford or VCU, but this is UT’s only non-conference home game this season against a Power 5 opponent.

When this game was scheduled, it was meant to be the highlight of December. Texas officials are bringing Bevo Boulevard to the Erwin Center to jazz up the pre-game festivities. It’s the 5 p.m. nightcap to a strong double-header opposite a Tennessee-Texas women’s matchup at noon.

After Wednesday’s loss, the Longhorns (5-3) had Thursday off and then two days to reboot and prepare for this annual Big Ten power. Presumably, they’ve spent that time in self-reflection.

“It’s hard to describe,” UT coach Shaka Smart said after the VCU game. “Less than two weeks ago, we were 5-0 and just beat the No. 7 team in the country with the same guys.”

Some of the offensive totals put up in the last three games defy belief. And some don’t. One day after the win over North Carolina, Texas shot 34 percent against Michigan State. That was one day after a big win and was just UT’s first loss of the year. It could be easily dismissed.

But Texas shot 35 percent against Radford. That included going 5 for 27 from 3-point range. Senior Kerwin Roach was 2 for 12 and senior Dylan Osetkowski was 4 for 15.

Then came the disaster against VCU. Roach was 1 for 11. Texas went 4 for 17 from beyond the arc — 0 for 7 in the second half — and struggled to score in half-court sets.

To Roach’s credit, he took the blame for two bad performances and admitted he must do better. He acted exactly how a senior leader should. “Matt (Coleman) even called me out on some poor shots,” he said.

Osetkowski and Coleman didn’t hold back, either. “Good teams hit rough patches,” Coleman said. “We just have to respond. Our whole can be greater.”

Febres and Mitrou-Long met with reporters late in the week and both talked openly about their frustrations. They owned it.

“I think it’s just a lot of not taking the right shots,” Febres said. “Our shot selection could be a lot better. Getting the ball inside, Jericho (Sims) had it going (against VCU). I think we should have fed him a lot more. In my honest opinion, I want D.O. to shoot those open looks whenever he pump-fakes. Taking that shot is what we need from him.”

This openness is why Smart believes in this team. It’s also why Smart himself has high hopes for what this group can do.

Any coach will tell you that when things aren’t going well, focus on what is working. Right now, that’s Sims and his low-post game. He rang up 14 points by going 7 for 9 with six rebounds against VCU. Jaxson Hayes also had eight points on 4-of-5 shooting.

Purdue has 7-3 center Matt Haarms, a sophomore closing in on 100 career blocks.

“It’s true,” Mitrou-Long said. “I feel like we need to start playing inside-out a little more. Things aren’t going our way right now. Balls aren’t falling. It’s going to fall after a few games, but if it’s not falling, we’ve got to obviously change up something on offense.”

If the Longhorns can just get a few more shots to fall, their entire outlook could change dramatically. But this has also been one of the worst shooting teams in the Big 12 going on three seasons now.

“If we dwell on the past, we can’t move forward,” Febres said. “You can’t think about what happened yesterday.”

Tennessee uses outside bombs to tame Texas in old rivalry