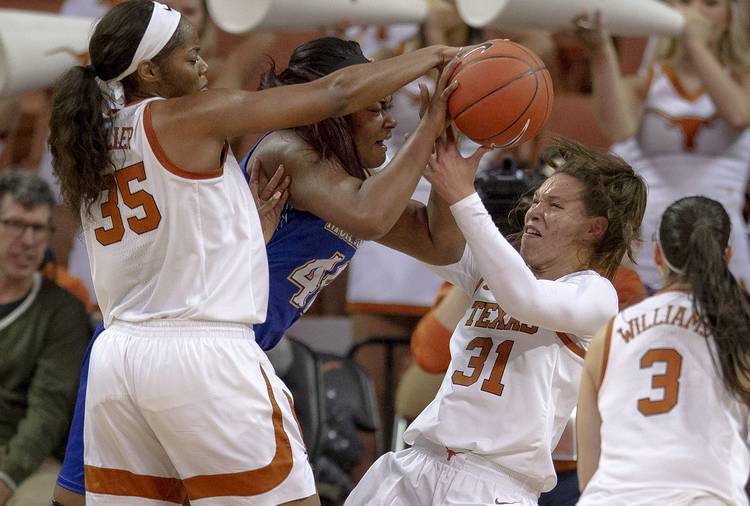 Texas guard Audrey Warren (31) and forward Charli Collier (35) were part of an offense that scored 82 points against the Lady Vols. [NICK WAGNER/AMERICAN-STATESMAN]

In defeat, Karen Aston discovered something about her team that had been missing in recent weeks.

The Texas basketball coach was not a happy camper about losing an 88-82 decision to Tennessee Sunday afternoon at the Erwin Center. There were defensive breakdowns and too many easy shots that rolled around the rim and off.

For a change, though, Texas showed some fight.

“I can go home and find some things to improve upon,” Aston said, “but it doesn’t start with effort.”

Aston gave No. 9 Tennessee credit. The Lady Vols, who had entered the game shooting 31 percent behind the three-point line, found their stroke on Sunday, hitting 55.6 percent (10 for 18) behind the arc.

And the 12th-ranked Longhorns had no defense to stop Lady Vol senior guard Meme Jackson, who peppered the nets for a career-high 33 points. Her previous high was 21 points in a game against Arkansas as a junior.

“She’s in the gym constantly,” Tennessee coach Holly Warlick said of Jackson. “For her to get 33, I’m not surprised because she’s worked her tail off all summer to perfect her game and it’s paid dividends.”

Texas (7-2) had plenty of reasons to feel positive in its final major tuneup before the Big 12 season starts Jan. 2.

Tennessee, trailing 23-14 after one quarter, took command of the game by outscoring the Longhorns 26-12 in the second quarter to take a 40-35 halftime lead. Point guard Evina Westbrook complemented Jackson with 23 points and six assists.

Texas would tie Tennessee 52-52 with a driving layup by point guard Sug Sutton midway through the third quarter, but the Longhorns never owned the lead in the second half.

In one game-changing moment, Williams was whistled for an unsportsmanlike while driving to the rim for a layup. A sea of boos cascaded the arena as referees Mark Zentz, Lisa Jones and Gina Cross huddled up after watching a TV replay.

“Westbrook was on my hip and I just tried to draw contact and they said I led with my elbow,” Williams said. “I guess I hit her in the head. I guess that’s where the unsportsmanlike came from.”

Tennessee, leading 54-52 when the call was made, would score the next five points, seemingly ending the home team’s momentum.

With the victory, Tennessee improved its series record to 25-15 over Texas. Hall of Fame coaches Jody Conradt and Pat Summitt started a rivalry that needs to be continued.

“You honor Jody and Pat’s legacy,” Aston said. “This game means a lot to us and I thought our players played like it meant something today. It wasn’t pretty, it wasn’t perfect. We have a lot of work to do. I feel a lot different – and that sounds crazy because we gave up 88 points and I like defense – but I feel so much different about their fight and where they are today as opposed to last Sunday.”

Purdue isn’t a must-win game for Texas, but it sure feels like it