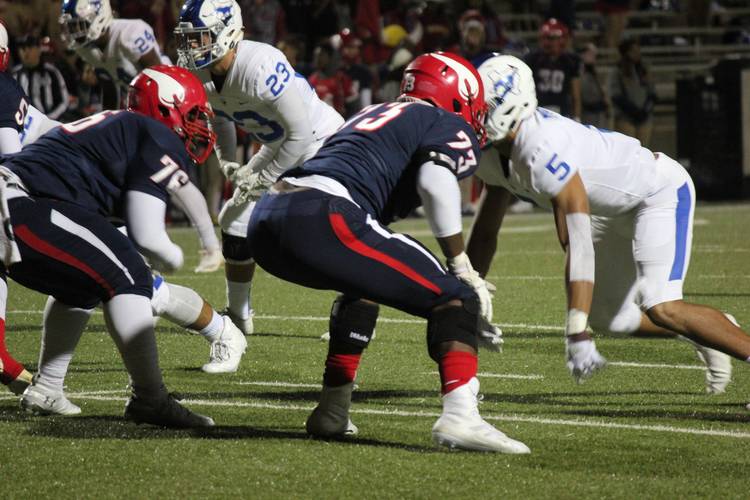 Eight days separate us from the start of the early signing period. Members of the 2019 class can sign national letters of intent during a three-day window starting on Dec. 19. The prospects who elect to wait can sign on national signing day in February. The next month should be exciting for recruiting fans around the country, and specifically for those who keep a close eye on the Longhorns. Texas’ class currently consists of 21 members and ranks sixth in the nation and first in the Big 12. Here are key dates:

Texas hopes the next domino to fall happens Thursday when three-star outside linebacker Caleb Johnson of Fullerton College (Calif.) picks between the Longhorns, Oregon, Colorado and Arkansas. The former Iowa State pledge is a coveted JUCO product who’d immediately compete for snaps in the two-deep in Austin for the 2019 season. Texas is losing Gary Johnson and Anthony Wheeler to graduation and need experienced bodies at linebacker.

The trio currently committed includes early enrollees like De’Gabriel Floyd and Marcus Tillman Jr., but a guy like Johnson provides physical and mental maturity impossible to expect from prep products as freshmen. It’s reportedly a two-team race between Texas and Oregon for the 6-1, 215-pound prospect who ranks as the No. 3 JUCO outside linebacker.

It’s the last weekend of official visits before the early signing period and the main target expected on campus is four-star offensive tackle Isaiah Hookfin. The Fort Bend Dulles product raced to the top of the Longhorns’ recruiting board with a strong senior season. The 6-5, 270-pound prospect will be on the updated Fabulous 55 and is favored to leave Austin committed to Texas.

Texas has pledges from two offensive linemen with four-star tackles Tyler Johnson and Javonne Shepherd. Hookfin would provide another option with plenty of upside for offensive line coach Herb Hand to mold over the next couple of seasons. Hookfin is the No. 32-ranked tackle in the country, per the 247Sports composite.

Hookfin isn’t the only offensive line target, and it wouldn’t come as a shock if a JUCO prospect visited Austin before Dec. 19. Texas also can pursue the graduate transfer market like it did to land Calvin Anderson from Rice before the start of the 2018 season. Hand has worked miracles in 2018 and needs more depth to improve the unit.

National signing day is so 2016. The new rage is signing early. Nineteen of the 21 commitments Texas had at this point for the 2018 class signed early last cycle. That number would’ve been 20 had Carthage’s running back Keaontay Ingram not played a state title game the week of the early period.

The schools want the kids locked in. The kids want the process over. It’s mostly a win-win for both sides.

Only two of Texas’ 21 commitments are suggesting they might wait until  February — four-star athlete Peyton Powell and defensive lineman Myron Warren. The other 19 have indicated that the early signing period will mark the end of their recruitment. Texas expects six of its 21 commitments to enroll early.

The day is also important because of four-star running back Noah Cain. The IMG Academy product spent his first two years of high school at Denton Guyer and will announce his decision in Dallas. The Longhorns are in a strong position for the 5-10, 212-pound prospect. Cain is the No. 7-ranked running back in the class.

The All-American Bowl in San Antonio takes place Jan. 5. It’ll feature several future Longhorns, but that won’t be the reason to watch. The main reason to tune in on NBC is for five-star athlete Bru McCoy, who will pick between Texas and USC.

The Longhorns are a real player for the two-way star who is considered the top-ranked athlete in the class and a consensus top-10 prospect nationally.

Texas hopes to enter that date with most of its class already signed after adding Hookfin and Cain to the mix. McCoy would be the cherry on top of an interesting class. There’s a real chance Texas signs more prospects from outside the state than inside the state.

The recruiting success of Oklahoma and Texas A&M early in the cycle gave Tom Herman a reason to search nationally for targets and the staff did a great job building a potential top-10 class without dominating with in-state talent like it did in the 2018 class.