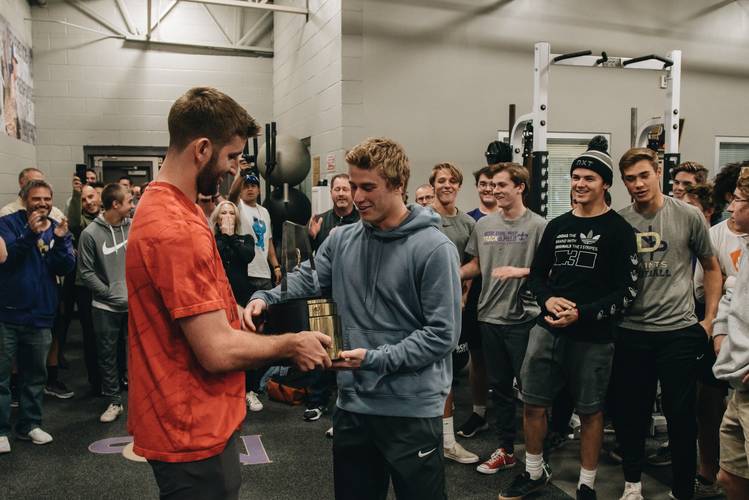 Arizona high school senior Jake Smith, A Texas commitment who is expected to sign with the Longhorns on Wednesday, was named Gatorade’s national football player of the year on Tuesday afternoon.

Smith, a 6-1 athlete and four-star prospect,  finished his high school career at Scottsdale (Ariz.) Notre Dame Prep with two state championship game appearances, 5,446 total yards and 72 touchdowns. He played all over the field in high school but will focus on being a wide receiver in college. Tuesday’s surprise ceremony took place at his high school, and he was handed the award by Arizona Cardinals quarterback Josh Rosen.

“This is the No. 1 accomplishment for me so far,” an excited Smith said via teleconference. “It was unbelievable. It’s a day I’ll never forget.”

As a senior, Smith led Notre Dame Prep to a 13-1 season and a return trip to the Conference 5A state championship game. He finished the year with 64 receptions for 1,112 yards and 22 touchdowns and added 741 rushing yards and another 22 touchdowns on the ground. He also returned two kickoffs for touchdowns, registered 4.6 sacks as a defensive player and averaged 38.7 yards per punt.

He’s one of three wide receivers that are committed to Texas, along with Cuero’s Jordan Whittington and St. Louis’ Marcus Washington. Smith’s future is at the slot receiver position; he said he hopes to earn a spot returning punts and kickoffs, too.

Smith became the first player in Arizona to gain more than 1,000 yards rushing and receiving in the same season since Christian Kirk in 2011; Smith accomplished the feat his junior year.

The award seeks out superstar players who also take pride in school and the community. Smith holds a 3.33 GPA and volunteers through St. Bernard of Clairvaux Catholic Church and the St. Mary’s Food Bank Community Kitchen, Feed My Starving Children and the Miracle League of Austin.

“Excelling off the field was always important to me,” he said. “I work hard to do all I can in the classroom and for the community.”

Recent winners of the Gatorade award include Oklahoma quarterback Kyler Murray (2014) and USC quarterback J.T. Daniels (2017). Two recent Longhorns — quarterback Garrett Gilbert in 2008 and running back Johnathan Gray in 2011 — also are past winners.

“My best advice (to Jake) is to stay true to yourself and do what got you here,” Rosen said. “There is going to be a lot of change. You’re not only a college football player, but you’re a human being who is living away from home for the first time.”

Smith chose the Longhorns over USC and 31 other offers. He committed to Texas on June 3 and was in attendance when Texas beat USC earlier in the season.

“I think I fit in great with the offense at Texas and I don’t think there is a guy on the roster with my skill set,” Smith said. “If I can get in the playbook, get my weight up and show up ready, I believe I have a very good chance at making an impact right away.”

Texas’ recruiting class, which has 21 pledges so far, ranks No. 6 nationally and No. 1 in the Big 12; the Longhorns’ 2018 class ranked third nationally. Smith plans to enroll next summer and immediately compete for snaps on offense and special teams. He’s the No. 81-ranked prospect nationally and the 12th-ranked wide receiver. He’s considered the fourth-best prospect pledged to Texas behind offensive tackle Tyler Johnson, Whittington and outside linebacker De’Gabriel Floyd.

The Dotted Line: Important recruiting dates on the horizon for Texas fans