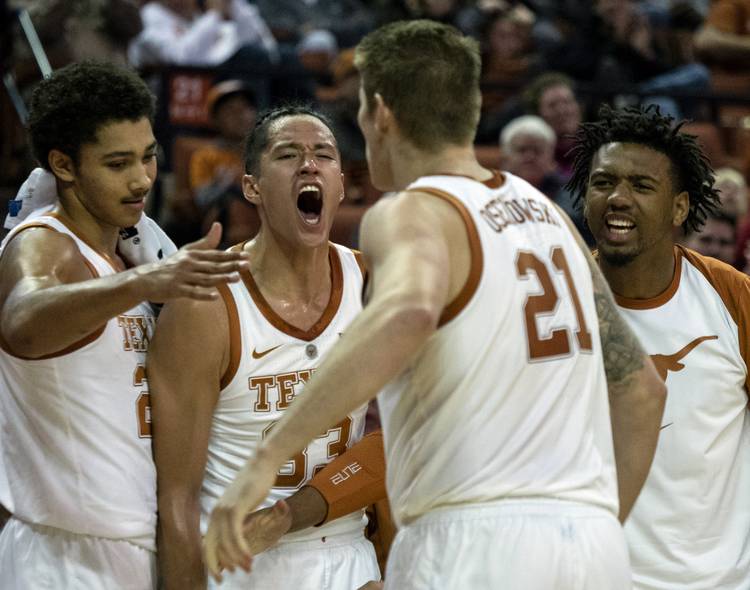 Texas Dylan Osetkowski, (21), celebrates a basket and a foul with Jericho Sims, (20), Kamaka Hepa,(33), and Royce Hamm Jr., (5), against Louisiana Monroe during the second half of NCAA college basketball game, Monday Nov.12, 2018, in Austin, Texas. [Rodolfo Gonzalez for AMERICAN-STATESMAN]

Texas fans should do their best to make Alaska-born freshman Kamaka Hepa feel at home. For this native Iñupiat, it’s rather difficult to get back to his.

“From here? OK,” Hepa said this week before rattling off the route from Austin, Texas to Barrow, Alaska. “I feel like the best route would be a direct flight to Seattle in the Pacific Northwest. That’s about a 3 1/2 or 4-hour flight.

“From Seattle, you would go to Anchorage, which is the main city in Alaska. That’s another 3 1/2-hour flight. Then to get into Barrow, you can’t drive in, unless it’s the winter time. If you want to drive in, you have to drive on these ice roads.”

At least you can do all kinds of cool (cold?) stuff in Barrow, in addition to playing basketball indoors. Stuff you’ll never find in Texas.

In the wintertime, temperatures can drop to minus-20 degrees. A typical day is about 40-45 degrees, Hepa said. If the sun peeks out and it reaches 60, “that’s when you have people jumping in the Arctic Ocean,” he said. The average water temperature is minus-4 degrees.

UT reports that Hepa is one of 11 Alaskans in a student body of 51,832 — or 0.000212 percent of the student population. But he’s the only one who stands 6-9 with a silky-smooth long range shot, unfortunately for coach Shaka Smart.

Only two college recruiters ever made it to Barrow, that Hepa can recall. One was from Gonzaga and the other from Old Dominion. The latter must’ve gotten lost. Hepa was Alaska’s Gatorade player of the year as a freshman and sophomore in high school while winning back-to-back state titles.

Out of sight, out of mind, right? That’s exactly why Hepa, his father and youngest brother moved to the lower 48 before his junior year. He needed more not-so-Northern exposure. The three landed in Portland, Ore., leaving Hepa’s mother, two older sisters and one older brother back home.

Hepa kept doing his thing and dominated another state. He won another state title as a junior and was Oregon’s Gatorade player of the year as a senior while reaching the title game. He averaged 16.5 points and 10.4 rebounds. Only this time, lots of coaches noticed.

Hepa earned a spot on the Team USA Under-18 national team last summer, coached by Kansas’ Bill Self.

In an article written for USA Basketball, Self confessed he’d only been as far as Fairbanks, Alaska, which is about two hours from Barrow. “So, he’s quite a ways up there,” Self said.

“But, in the time that we’ve been together, I’ve been so impressed with his basketball IQ,” the Kansas coach added. “I think he’s well beyond his years for most 18-year-olds. The more you coach him, the more you like him and the more you trust him.”

Hepa was recruited by UT, Gonzaga, Oregon and Oklahoma. He ultimately chose the Longhorns. In a bit of fortuitous scheduling, Hepa got to meet some of his future teammates in November 2017 when Texas played in the PK80 tournament in Portland.

“He was like, ‘Yeah, man, I’m from Alaska!’ That’s different. That’s real different,” UT senior Kerwin Roach said with a laugh. “We actually called him up there the Alaskan Assassin. Hopefully that catches on for him. But he’s a great player.”

Trajan Langdon, a star at Duke who logged a few years in the NBA and played in Europe, may take slight offense. He had that nickname decades ago. But Langdon was born in California and then moved to Alaska. Hepa was born and bred up north. He openly admits to being a better shot than a shooter.

At least Hepa returned to Barrow last May so he could graduate with his longtime friends. This time, he had one extra family member in attendance — Texas assistant coach Darrin Horn.

“It’s what Darrin said he would do,” Smart said. “Darrin was being a man of his word.”

As a player, Hepa is no different than other talented freshmen that enter into college basketball. They dominated at the high school level, or in Hepa’s case dominated two states, and then reach college. Here, everyone is as good or better than they are.

In early games, Hepa found his niche in limited playing time shooting 3-pointers from the right wing. Smart plans on expanding that. One of Hepa’s best traits may be his ability to whip the ball around. He had two key assists in a win over Purdue. Smart said Hepa had the ball less than a second.

It’s not going to be easy, though. Hepa has just one ball deflection in 91 collective minutes. And opponents have shown a willingness to drive straight at him in games.

“The exciting thing is that he’s got all these areas where he can get better,” Smart said, “but he’s already impacting the team in a lot of ways.”

Culturally, too. Hepa had his shirt off in 40-degree weather the other day, Roach said. Just wait until he discovers how Texans, specifically Austinites, handle “icy” weather conditions.

“In the wintertime,” Hepa said, “we’ll take our snowmobiles, which are like … well, you guys know what snowmobiles are.”