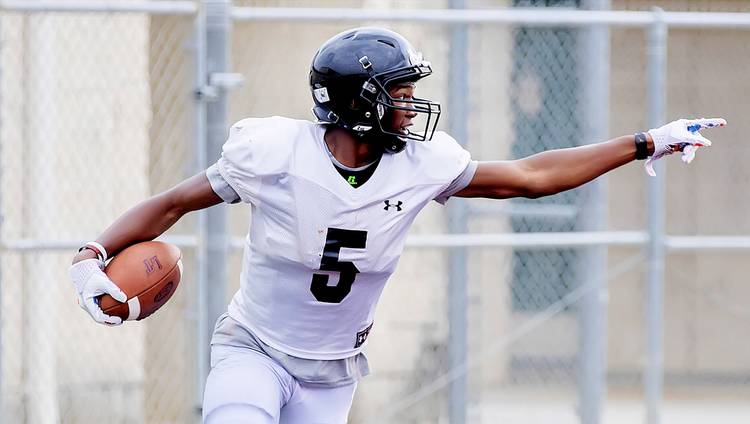 Lake Travis wide receiver Garrett Wilson is the top recruit in the state on our updated 2019 Fabulous 55. He plans to sign with Ohio State. (JOHN GUTIERREZ/FOR AMERICAN STATESMAN)

Lake Travis football coach Hank Carter first heard the name Garrett Wilson from his sister-in-law who coaches at Hudson Bend Middle School. He didn’t give it a ton of thought until a few months later when he witnessed a Hudson Bend sixth grader score a touchdown in a 7-on-7 middle school tournament.

That same kid went and dunked the ball over the goal posts like an NFL celebration. His name was Garrett Wilson, and jumping has always come easy for the top football recruit in the state. Wilson, the No. 1-ranked player on the American-Statesman’s updated Fabulous 55, is now a five-star wide receiver who plans to sign with Ohio State on Wednesday, the first day of the early signing period.

They all know who Garrett Wilson is now. His name has been mentioned by every recruiter that’s come through Lake Travis High School for the past three years. The first time he dunked a basketball was in the eighth grade and his circus catches have been aired on ESPN.

“Wide receiver and playing basketball definitely complement each other,” Wilson said. “The movements and the freelance ability with your body to contort and go make plays, that’s important in basketball and going up for catches.”

The 6-1, 181-pound senior was a finalist at The Opening this summer in Frisco. His sophomore season at Lake Travis ended with a state championship. His junior season ended in the state title game and he hoped to reach another Class 6A Division I title game this year; Lake Travis faced Galena Park North Shore in Saturday’s state semifinals. Wilson’s high school career will be capped with an appearance in the All-American Bowl game in San Antonio on Jan. 5.

He caught three touchdowns in Lake Travis’ 38-21 win over Converse Judson in the state quarterfinals.

“Every game is important, but I’d be lying if I said it wasn’t those types of games that really get me going,” Wilson said. “I’m supposed to be the best player on the field and it’s my job to prove that and help my team win. The big games are why I love athletics.”

It’s a trait that his head coach loves. Some of the top recruits build film and stats after feasting on lower-level competition. Not everyone loves the grind. Carter says Wilson’s grit and competitiveness set him apart from most prospects, and Carter knows a few things about prospects at Lake Travis.

“His parents did a great job raising him,” Carter said. “He’s as humble as can be until he steps on the field or the court. He reminds me a lot of Baker Mayfield in that way. He has this switch on the field, but then he’s the nicest person when it comes to the kids in this community. He’s a special kid.”

Wilson wants the ball in the big moments. Whether on the basketball court or the football field.

“Garrett’s at his best when we’re going up against a top corner or playing a great team,” Carter said. “He just loves the competition. It drives him, and it gives him a challenge.”

Wilson will be the second No. 1-ranked player on the Fab 55 to choose Ohio State in the last three years; Baron Browning, a five-star linebacker from Kennedale, signed with the Buckeyes in 2017 and has played in 11 games as a sophomore. Ohio State landed three of the state’s top four players that year, along with La Grange running back J.K. Dobbins and South Grand Prairie safety Jeffrey Okudah.

Only 12 players from the Fab 55 remain uncommitted. Texas A&M has 12 pledges from Fab 55 players; Texas is second with seven. UT’s class has been strengthened by several out-of-state recruits and ranks sixth in the country heading into the early signing period.

Carter compared Wilson, who caught 98 passes for 1,773 yards and 26 touchdowns his junior season, to Odell Beckham Jr. The two are similar in size. They’ve also built a reputation for the circus catch. Soon Wilson will be off to Columbus; he reaffirmed his commitment to Ohio State immediately after Urban Meyer’s retirement. In the end, he chose to play Columbus, where he was born, instead of staying in Austin to play at Texas.

“I knew where I wanted to go, and I’ve stuck with my decision,” Wilson said. “Getting it out of the way allowed me to focus on my main goal and that’s getting this team back to a title. Recruiting can be stressful, but you just do what is best for you.”

His presence on the field changes everything and helps a future Longhorn do his job.

“He sure makes me look good,” said Lake Travis quarterback Hudson Card, a 2020 commitment to Texas. “It’s like a video game sometimes. I know he’ll catch it if I put it in his area.”

The Dotted Line: Questions remain for Texas heading into the early signing period