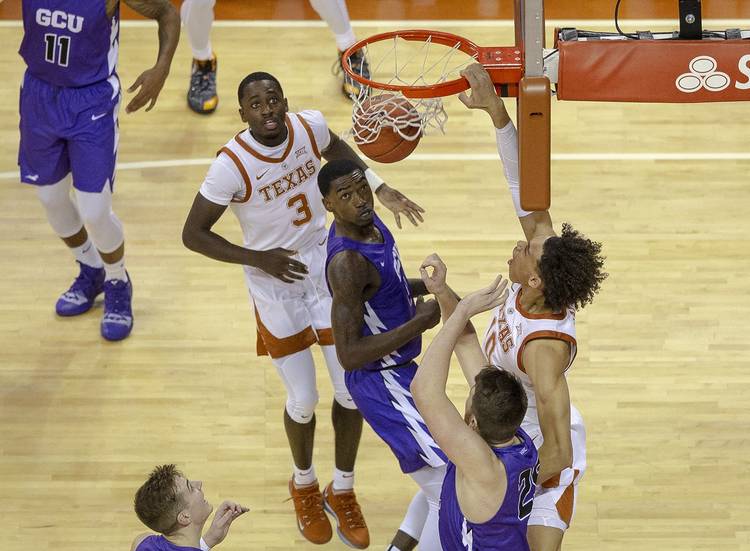 “Thunder Dan” Majerle has seen some prolific basketball in his time. But the famous NBA star, now in his sixth season as a college coach, probably never expected this from scoring-challenged Texas.

The Longhorns couldn’t throw it in the ocean a week ago. On Saturday, Texas filled up Grand Canyon with an epic display of offensive genius in a 98-60 win at the Erwin Center.

With the building three-quarters empty, the Horns (7-3) made plenty of noise on their own by shooting 69 percent in the first half and cruising to the finish line. It was exactly what a Power 5-level team should do a mid-major in December.

“When they come out and shoot like that, they can beat any team in the country,” Majerle said. “We just got punched in the mouth early and for some reason, we couldn’t fight back.”

When walk-on Drayton Whiteside is drilling a 3-pointer and coach Shaka Smart is holding him back from going for 100, you know it’s been a good day for the home team.

Five Longhorns finished in double figures as the team shot a season-high 58.7 percent. Elijah Mitrou-Long, celebrating his 22nd birthday, and Jase Febres both had 16 points. Dylan Osetkowski, Courtney Ramey and Kerwin Roach II all hit two 3-pointers and tallied up 10 each.

“That was a clinic they put on,” Majerle added before leaving. “Enjoyed my time in Austin.”

Credit Smart for shaking up the starting lineup and subbing Mitrou-Long for Roach. The senior just hadn’t been the same since blowing up against North Carolina for a career-high 32 points on Thanksgiving. “Snoop” was 9-for-43 (.209 shooting percentage) in the four games since.

Or, at least that’s what it looked like. Smart said afterward that Roach “had a minor team infraction, so he didn’t start.”

Said Roach: “Before we start, I just want to say I was late to a film session. That’s why I didn’t start today.”

The Horns opted to go inside early instead of passing it around and shooting 3-pointers. It was the total opposite of the botched start against Purdue. Osetkowski, Mitrou-Long and Febres all scored on either layups or mid-range jumpers. Mitrou-Long threw a bullet pass to Jericho Sims for a dunk, and the Horns were off and running.

Roach entered the fray just before the first media timeout and hit a 3-pointer. He would later score on a nifty baseline drive and a layup off a run-out.

In the final 10 minutes of the first half, Texas would hit nine straight field goals. Roach hit a 3-pointer from the right corner, Mitrou-Long drilled one and Osetkowski followed with one of his own. Coleman and Roach both found Jaxson Hayes for alley-oop dunks.

Who are these guys?

UT’s 56 points in the first half doesn’t come close to any school records, though. The Horns needed to get at least more than 65 to break into the top five for a half. Still, where was all this wizardry against Radford or Virginia Commonwealth?

Even sophomore Royce Hamm Jr. got his second appearance of the year. Smart praised his recent practice time; Hamm just needed to be more consistent. He had seven points and five rebounds in seven minutes.

“I played almost 22 minutes and had (three) rebounds,” Roach said. “Shout out to him. He works his butt off every day.”

Smart said the coaches showed the players video of them actually making shots. A coach who believes in the power of positive thinking really wanted the Longhorns thinking positive about themselves.

“To not just visualize themselves making shots, but shooting the right way,” Smart said. “They did a good job of sharing the basketball and creating good shots for each other.”

For whatever reason, this team needs to see shots going through the hoop early to have confidence.

“And unfortunately the opposite of that is true,” Smart said.

What’s interesting about this team is that all it lacks is scoring punch. Texas has a top-10 defense, as judged by Ken Pomeroy’s analytical data. The rebounding can get better, but for the first time in years, Texas isn’t the worst free-throw shooting team in the Big 12.

There’s a lot to like — provided Smart and Co. could find some offense. Saturday’s win was a major step in the right direction.

“You don’t want to start the first four minutes in a drought and go 1-for-5 or 1-for-6,” Febres said. “We love to see the ball go in the basket. You get the ball going in, it kind of jumpstarts the offense, starts the whole game.”