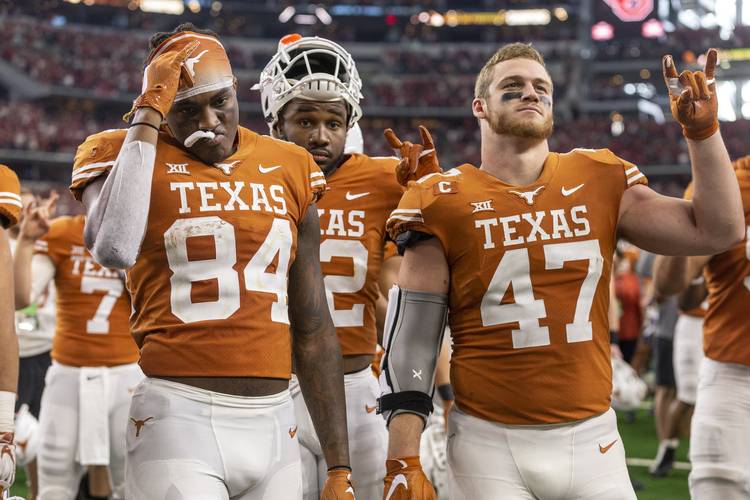 There are some moments that are undeniable turning points. Take the 2017 Texas Bowl, for example. Texas’ 33-16 win over Missouri set the stage for the Longhorns’ 2018 surge to the Big 12 championship game.

“I think a lot of us are still thinking about it,” UT senior linebacker Gary Johnson said. “A lot of seniors felt bad after the game. There’s nothing we can do about it now. But it’s the thought that’s still in the back of our heads.”

Safety Brandon Jones still spoke about it in a hushed tone. “I know a lot of stuff in that game I could have fixed,” he said. “I had a lot of mistakes that resulted in big plays for touchdowns.”

The 15th-ranked Longhorns (9-4) aren’t necessarily beating themselves up, but they sure view the Sugar Bowl as their mulligan.

Not many inside the Moncrief-Neuhaus Athletic Center really care if Texas is a double-digit underdog. A battle against No. 5 Georgia (11-2) is a welcome challenge, defensive end Charles Omenihu said.

“I think we’re going to fare pretty well. We’re at the game,” Omenihu said. “They’re not going to put no scrub in the Sugar Bowl, right? OK, then. We’re going to be good. Like how I put my jacket on today, if it’s cold in Georgia, they put their jacket on the same way. They’re men just like we are.”

Players met with reporters on Monday for the first time since the OU loss. Some of them had housekeeping items to address.

Quarterback Sam Ehlinger reported his right (throwing) shoulder “feels great. Feels really good.” In late November and after facing the Sooners, Ehlinger indicated the injury was not a major concern.

“The joint is as close to 100 percent as it’s been since the injury,” Ehlinger said, “and now they’re just getting the muscles around it that were overcompensating for it back to 100 percent is the goal.”

Receivers Lil’Jordan Humphrey and Collin Johnson were both asked again about their NFL futures. Both juniors indicated they want to see what the NFL draft advisory committee has to say first. Humphrey said he will make his decision after the Sugar Bowl and was “for sure 50/50” as of Monday.

All players who are healthy are expected to play against Georgia. Nobody is expected to sit this one out to protect his draft status.

“Going against a school like Georgia, if we’re just talking about me personally, is a good thing,” Omenihu said. He believes only first-round draft picks should consider sitting out. “That’s a challenge I need to uphold and take.”

The Longhorns have returned to practice and started watching highlights of the Dawgs. Running back D’Andre Swift is a “one-cut guy,” Jones said, while Elijah Holyfield is a “powerful, run-you-over-type of guy.”

Swift is the team’s leading rusher with 1,037 yards and 10 touchdowns. Holyfield has 956 yards and seven touchdowns. Overall, Georgia has the nation’s 12th-best rushing attack while Texas ranks 36th nationally in run defense.

“I technically feel like running the ball down somebody’s throats is basically disrespecting them,” Johnson said. “It’s like you’re just going to overpower them and there’s nothing (they’re) going to do about it. It’s something we look for as a defensive unit, to prove that we’re going to stop the run.”

Bowl games always boil down to sheer motivation. The team that wants to be there usually overpowers the team that doesn’t. Georgia players were miffed they were left out of the College Football Playoff semifinals. The Bulldogs have said all the right things in the days since the final CFP rankings. Expect that to be the main storyline leading all the way up to kickoff in New Orleans.

Texas was likely going to the Sugar Bowl regardless what happened in the Big 12 title game. The Horns’ destiny was somewhat known. They haven’t played in a New Year’s Six bowl game since the end of the 2009 season. To them, this is all new and exciting.

“Which team is going to let go of the last game and put their all into this game?” Johnson said. “I’m excited for it.”

Center Zach Shackelford dismissed any comparisons of the SEC’s style of play with the Big 12’s. “Our coaches always say you come to Texas to play in big games like this, and this is true,” Shackelford said. “I think we’re pleased that we’ve come this far, but we’re hungry for more.”

Pressed about the aura of the SEC, Shackelford just shrugged. “I guess we’ll see come Jan. 1.”