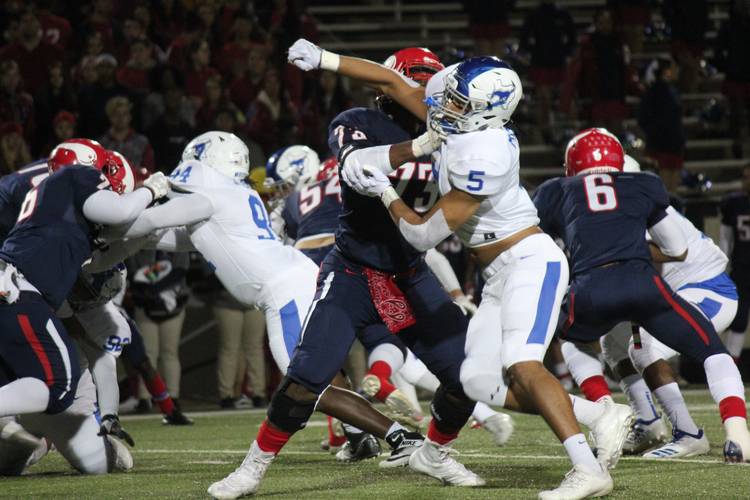 Fort Bend Dulles offensive lineman Isaiah Hookfin joined the 2019 recruiting class when he pledged to Tom Herman and the Longhorns on Thursday. The 6-foot-5, 270-pounder plays right tackle at Dulles and held 21 offers. He picked up an offer from Texas after an unofficial visit to Austin on Nov. 3 for the West Virginia game. The Longhorns immediately emerged as the favorite for the the four-star prospect.

It wasn’t as easy as Texas hoped but he becomes the second offensive tackle to sign with Texas in the early period, joining four-star prospect Tyler Johnson of Conroe Oak Ridge. He flirted with Baylor despite visiting Austin last weekend. He postponed his decision yesterday and it was the opening the Texas staff needed to lure one its top remaining targets into joining offensive line coach Herb Hand and his quest to turn Texas into the bullies of the Big 12.

Skill set: His size and strength translate to right tackle or a move inside to guard. He’s a raw prospect who needs a few seasons to get in the weight room and refine his technique, but he’s a big, strong mold of clay for assistant coach Herb Hand to mold at multiple positions. Hookfin’s stock rose as a senior and that upside and improvement is a good sign for his future at Texas.

Immediate impact: No position is harder to play early than offensive tackle. The difference between blocking teenagers dreaming of prom night and grown men fighting for NFL stock is a world apart. Hookfin isn’t one of the handful of elite prospects who can play early. He’ll take a season or two to add strength, technique and work on his flexibility until he’s asked to contribute in the two-deep. Hookfin is a member of the 2019 Fabulous 55 and was recently awarded four-star status.

Fitting into the program: Hand picked Hookfin late in the cycle as his under-the-radar option at the offensive tackle position. The Longhorns found Christian Jones late in the 2018 cycle and flipped Samuel Cosmi late in the 2017 cycle. Texas hopes Hookfin can follow the same path as Cosmi, who took a redshirt season in 2017 to prepare for a starting spot in 2018. Hookfin is also another Houston-area product joining the Texas locker room.

Recruiting at the position: Hookfin is the third offensive lineman to pick Texas in the 2019 cycle, joining four-star offensive tackles and Fabulous 55 members Johnson and Javonne Shepherd. Johnson signed on Wednesday. Shepherd did not and speculation remains that he’ll end up at Texas A&M. Expect the Longhorns to focus on keeping that trio committed while identifying an option at the JUCO level or in the grad transfer market to provide immediate depth.

Meet the Longhorns: Kenyatta Watson II not afraid of competition at defensive back