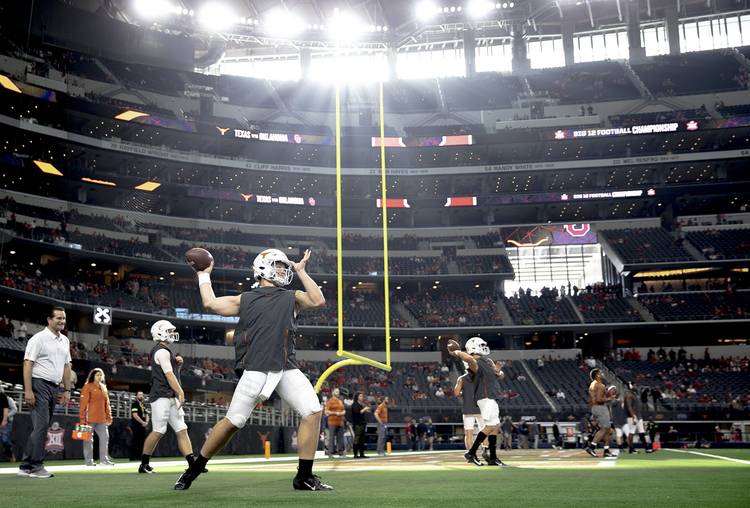 Trying to judge the biggest plays every year is always difficult. Some Texas fans will agree, others will argue until they are blue in the face.

The Longhorns have had plenty of standout moments this season. It would be easy to label this catch as big or that tackle as bigger.

But what were the most important plays?

Every season unfolds like a novel. The first chapter leads to the second, the second to the third, and so on. You can’t say one moment from week 10 was bigger or smaller than week two. There’s a compounding effect.

With that in mind, here’s a look at the most important moments from each game throughout Texas’ 9-4 season that will culminate in the Sugar Bowl.

Maryland: A rare, but costly, interception

The situation: Trailing by five, Texas faced third-and-10 from the Maryland 33 with just over 1 minute remaining.

Nobody really knew which team had the advantage after an 86-minute, fourth-quarter rain delay. When play resumed, Maryland had a 31-29 lead. Sam Ehlinger threw an interception and Tre Watson fumbled on consecutive possessions. Still, the UT defense forced a three-and-out as Texas took over again at its own 33.

Ehlinger went throughout the offseason having to hear about late-game turnovers as a freshman. This was his chance to silence the critics. After getting close to scoring range, Ehlinger rolled to his right, overthrew Lil’Jordan Humphrey and the ball was intercepted with 1:04 remaining. The Longhorns lost, 34-29.

Ehlinger’s Achilles heel was exposed yet again. But UT coach Tom Herman opted to stick with Ehlinger the next week against Tulsa. Ehlinger would then set a school and Big 12 record with 308 straight pass attempts without an interception.

The situation: Texas faced second-and-1 from the Tulsa 43-yard line in a one-possession game.

Watson and Keaontay Ingram got all the rushing attempts in the opener against Maryland and most against Tulsa. Daniel Young was summoned off the bench and had 9 yards on his first carry.

On second down, Young just lowered his shoulder and trucked Tulsa safety Manny Bunch. He put it in gear and raced 30 yards on a play that finished off the Golden Hurricane. It was Young’s longest run of the year as Texas fans, coaches and players all let out a sigh of relief after the Longhorns held on 28-21.

Herman said afterward the team looked nervous in the second half after getting chewed out at halftime.

The situation: USC already had a 14-13 lead and was looking for more on fourth-and-goal from the Texas 1 midway through the second quarter.

On third-and-goal at the Texas 1, USC was called for an illegal formation. Herman declined the penalty and rolled the dice. On fourth down, Stephen Carr went wide right, but safety Brandon Jones read the play and raced to the corner. “I just ran as fast as I could,” Jones said.

Jones knocked Carr out of bounds for an electric goal-line stand. The Horns rode that momentum to a 34-point avalanche in the second half en route to a 37-14 win.

TCU: A pick for the wolf of DKR

The situation: Texas had a 17-16 lead as TCU started a drive at its own 25-yard line with 45 seconds left in the third quarter.

TCU had owned Texas in recent years. All week long, the Longhorns heard about their four-game losing streak in the series. Coming off the USC win, Texas had a prime opportunity to shake up the rivalry.

Ehlinger threw a fantastic 31-yard touchdown pass to Collin Johnson, who used every bit of his 6-6 frame to make a Superman-like grab. The next play from scrimmage, TCU’s Shawn Robinson threw over the middle. Freshman safety Caden Sterns made the interception and almost had a pick-six. Officials ruled him out at the TCU 2-yard line.

Ehlinger ran in a touchdown on the next offensive play, and the Horns had a 24-16 lead. Sterns’ play in September launched his name into the stratosphere, and suddenly, “the wolf of DKR” was headed toward winning Big 12 defensive freshman of the year honors.

The situation: Leading by five, Texas took over with 6:20 remaining on the road at its own 40-yard line.

This game featured some of the best individual plays of the season from D’Shawn Jamison (a 90-yard punt return) and defensive end Charles Omenihu (one safety, two sacks). But the best play (plays, really) came on the final drive that ate up the rest of the clock and allowed UT to secure a rare road win in Manhattan.

On third-and-10, Ehlinger hit Johnson for a 10-yard gain. On third-and-1, Ehlinger ran for a gain of 3. Then on second-and-6 from the K-State 32, Ehlinger called his number again and rushed for 12 yards that put it away. On a day with few big offensive plays, it was a textbook way to close out Bill Snyder’s Wildcats.

Oklahoma: Off the foot of a freshman

The situation: Oklahoma tied things up at 45-45 with 2:38 remaining as Ehlinger and the UT offense got the ball back at their own 25-yard line.

Most Texas fans know how this story ended, but there were three significant plays that set up Cameron Dicker’s fateful 40-yard field goal. First, OU’s Tre Norwood was called for pass interference for pushing Johnson near the Sooners’ sideline. Then Ehlinger hit Devin Duvernay for an 18-yard gain. Two plays later, tight end Andrew Beck had a nifty 7-yard catch. Ehlinger ran twice for 12 yards, and then it was time for “Dicker the Kicker.”

The freshman from Lake Travis didn’t have many hold-your-breath moments this season. Overall, he was 16-for-22 on field-goal attempts. The 40-yarder against OU with nine seconds left was clearly the biggest, and arguably one of the biggest plays of the season for Herman’s Longhorns.

The situation: Texas opened the game with a 14-play drive, but after Ehlinger ran for 7 yards, he waved his right arm at the sideline.

Before the opening drive ended, Ehlinger came up to Herman and said, “My shoulder’s messed up.” Backup Shane Buechele was in, and Ehlinger was off to the locker room for an evaluation. Doctors diagnosed a sprained AC joint in his right throwing shoulder. The injury would become something to monitor the rest of the season.

As for the rest of the day, Johnson caught a 44-yard touchdown pass, and Dicker hit a 47-yard field goal. But on Baylor’s final possession, quarterback Charlie Brewer got the offense to the Texas 17. On first and second downs, Brewer threw incomplete. On the game’s final play, Brewer threw a ball to Jalen Hurd that sailed incomplete out the back of the end zone.

The Horns felt like they dodged a bullet — both on the field and in the training room. After an off week, Ehlinger would play the next game against Oklahoma State.

The situation: Oklahoma State had a 10-point lead late in the second quarter and lined up to punt on fourth-and-1 from midfield.

Maybe the Cowboys were trying to draw the Longhorns offside, or maybe they were just trying to use some trickery. But multiple players shifted at the line of scrimmage, including two offensive linemen who were already set in their stance. What should have been a clear false start penalty was instead ruled offside when UT’s Ta’Quon Graham jumped. Herman went ballistic.

Given a freebie, the Cowboys went for it all. Taylor Cornelius threw a jump ball up for Tylan Wallace. Kris Boyd mistimed the jump, and Jones couldn’t get over fast enough to make the tackle. Wallace scored on the 36-yard catch, giving Oklahoma State a huge 31-14 lead.

Ultimately, it was too big a hole for Texas. Boyd and fellow cornerback Davante Davis were suspended for being late to a team function, so the Cowboys picked on their backups. The run defense also allowed 181 yards in a 38-35 loss.

The situation: West Virginia’s Gary Johnson caught a 33-yard touchdown pass with 16 seconds left, but WVU still trailed by one.

Milliseconds before the WVU snap, Herman called a timeout. On the field, quarterback Will Greer connected on a slant route, but the play was ruled dead. On the next snap, UT linebacker Jeffrey McCulloch got sucked down into traffic and Grier ran wide left into open space for the winning score.

The situation: Texas lost a 17-point lead on a cold night in Lubbock, and before a hostile crowd, the Horns needed something magical in the final 1:45.

Ehlinger ran for 3 and 18 yards on UT’s final possession and then later had a 12-yard run to the Texas Tech 29-yard line. The Horns called timeout to talk it over.

Ten years prior, Tech’s Michael Crabtree scored a miraculous 28-yard touchdown on the game’s final play to end UT’s national championship hopes. This time around, the roles were reversed.

Matched against Tech cornerback Damarcus Fields, Humphrey went up into the air and caught a pass just inside the 5-yard line and battled his way into the end zone for a 29-yard score. It was the same corner Crabtree scored in, practically almost the same situation, too. “I didn’t (realize that), honestly,” Humphrey said. “But hey, it’s the LJ corner now.”

The situation: Texas needed some help to get back in the Big 12 race. The biggest play of the game may have happened well before kickoff.

As part of the new fan-friendly initiatives, Texas scoreboard operators turned on the West Virginia-Oklahoma State game on the video board during pregame. The Longhorns looked up and saw the Mountaineers lose, which meant they were back in control of their own destiny as far as the Big 12 title game was concerned.

“Yeah, I’ve got to talk to our video board operator doing that during pregame,” Herman said. “You talk about not worrying about the big picture, and there it is in freakin’ high-definition.”

Kansas: A makeup for McCulloch

The situation: Kansas’ Pooka Williams ripped off a 57-yard touchdown run to give the Jayhawks life. Then Ehlinger was intercepted.

Herman believes “momentum is an illusion.” But the Jayhawks certainly had it after starting another drive at the Texas 22. On second-and-5, Peyton Bender threw a pass over the middle that McCulloch got a hand on. In the perfect execution of a tip drill, McCulloch made the interception and raced the other way 65 yards for a game-changing play.

The Longhorns collected a field goal on the ensuing drive, giving them a 24-7 lead and that was good enough. For McCulloch, it was a nice way to make up for the West Virginia game. For Texas, it secured the team’s spot in the Big 12 title game in Arlington.

The situation: Trailing by three, UT’s Gary Johnson tracked down CeeDee Lamb after a 54-yard catch-and-run and forced a fumble. Texas took over at its own 8-yard line.

All championship games come down to a handful of plays and handful of players. On second-and-11 from the Texas 7, OU’s interim defensive coordinator Ruffin McNeill called for a corner blitz. Tre Brown ran straight off the edge, and Ehlinger never saw him coming. The Texas quarterback was crunched in the end zone for a safety, giving OU a 32-27 lead and the ball back. Brown would later say he couldn’t believe what was about to happen.

On OU’s ensuring drive, the Sooners drove down to the Texas 18. On third down, quarterback Kyler Murray found Grant Calcaterra for an 18-yard score. Calcaterra was hand-fighting with B.J. Foster, but officials weren’t going to call anything like that at winning time. OU won its fourth straight Big 12 title with a 39-27 victory.