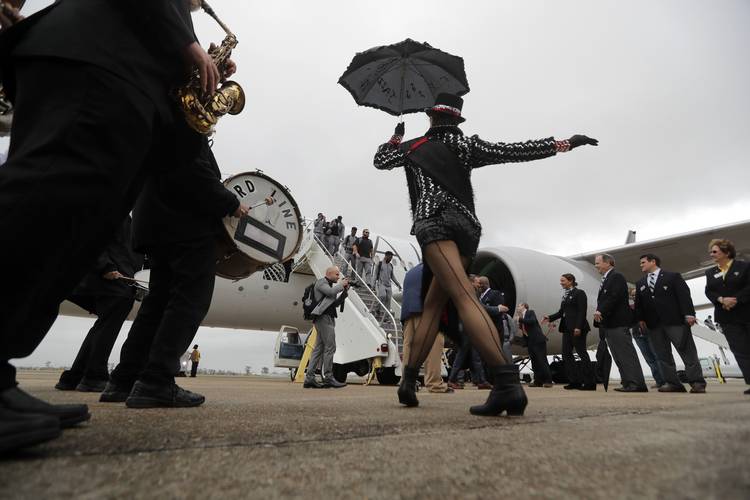 NEW ORLEANS — Having spent years going bowling in San Antonio or Houston — or maybe even nowhere at all — you can be sure the Longhorns will have a big time in the Big Easy.

Texas arrived at the Sugar Bowl on Thursday as a live brass band greeted coaches, players, administrators and family members as they exited the plane.

Senior leaders and team captains, like tight end Andrew Beck, got to ride first class. The 15th-ranked Horns (9-4) hope that’s how the entire week goes leading up to Tuesday’s game against the No. 5 Georgia.

“Did you see that? Unbelievable,” Beck said standing just off the tarmac at Louis Armstrong International Airport. “Laying down in a recliner, laying flat. This is great.”

Athletic director Chris Del Conte said for Texas making a New Year’s Six bowl game in coach Tom Herman’s second season was a tribute to the program. As for his time in New Orleans, Del Conte said, “All-you-can-eat beignets? Well, I don’t know. I’ve got to study on that.”

While cameras trained on the team’s top players, a slew of underclassmen exited from the back of the plane. That’s where you could find freshmen quarterbacks Cameron Rising and Casey Thompson.

Both have put their name into the NCAA transfer database, making them eligible to be recruited by other schools. It does not guarantee they will leave, but it allows them to at least explore that possibility.

Neither player got onto the field this season, although Rising was the third-stringer behind Sam Ehlinger and Shane Buechele.

College coaches are an all-in-or-get-out bunch. It’s odd to see Herman allowing them to stay with the team. However, “I mean, this is — this is the way of the world. This is where we are,” the coach said.

“Well, one, we want them to stick around,” Herman said. “We don’t want to lose either one of them. Nowadays in college football that’s their right, and that’s something that the football oversight committee and the transfer oversight committee thought was a necessary next step. And we respect that.”

Herman said the coaching staff has been “very communicative with both families, both young men. And they’re happy to be here, happy to be a part of their team.”

Earlier this month, Herman said he expected to have five scholarship quarterbacks competing for the starting job this spring. But if Rising and Thompson leave, that could knock the total down. Buechele is always the subject of transfer rumors, too.

“We certainly want them back,” Herman added for emphasis. “We feel that they’re an integral part of our future.”

Thorpe winner out: Georgia coach Kirby Smart played a sad trombone when he got off the plane Thursday. He announced that Thorpe Award winner Deandre Baker has elected to skip the Sugar Bowl and protect his NFL draft status.

“That’s a decision that he came to, I don’t know what day it was, last week,” Smart said. “Somewhere around midweek. He was very honest about it. He was very concerned about it. We at the University of Georgia support his decision.”

Baker had previously said he would play against Texas. He started all 13 games this season and had two interceptions and 10 pass breakups.

Who wants it?: Most bowl games are won by the team that’s happy to be there. This will be no different. Some believe Georgia should have been included in the College Football Playoff after a close loss to Alabama in the SEC championship game.

Georgia media reports have indicated that coach Kirby Smart and his players have all said the right things. But there was no noticeable buzz around Athens, Ga., the last few weeks.

“I think that’s true in any game,” Beck said. “The sport in and of itself is an emotional sport. I can only speak for my locker room, and everybody in there is going to be excited to play in this game.”

Stop the run: Georgia’s rushing attack will have UT defenders’ attention this week. D’Andre Swift has 1,037 yards this season while Elijah Holyfield has 956.

“These guys, they’re going to run the ball,” defensive tackle Chris Nelson said. “That’s our main focus as a D-line is slowing the run down. For me, I’m excited. I’m excited for this game, because I like stopping the run. I think the guys are going to be ready for the challenge.”

Injury updates: Herman said all other players who were supposed to arrive in New Orleans did so. He confirmed that defensive lineman Moro Ojomo (ankle) and receiver Al’Vonte Woodard (shoulder) are both doubtful. Safety Caden Sterns, who suffered a knee injury in the Big 12 championship game, practiced Wednesday and should again on Friday, Herman said.

Mind your whereabouts: Texas and Georgia are both scheduled to practice Friday and Saturday before going lighter on Sunday. Both teams are scheduled to visit a local hospital, and players can attend a NBA game. All sorts of things happen in New Orleans’ famous French Quarter, too.

“I would imagine our guys are going to enjoy their time here,” he added. “But, when it’s time to work, we’re going to be dialed in, focused in, and ready to work.”

Sugar Bowl notebook: What does the future hold in store for Texas’ Keaontay Ingram? ‘It’s Heisman’