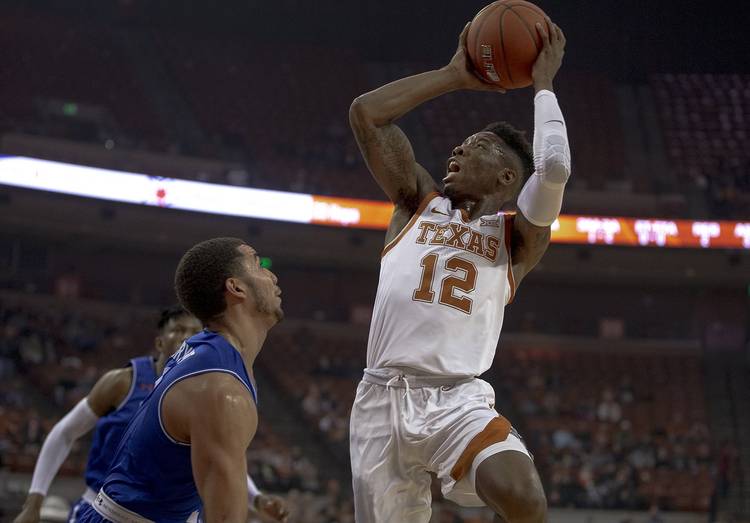 Kerwin Roach II says he spends a lot of time and effort working on his 3-point shot, a necessary asset for guards in contemporary basketball.

But at his best, the Texas senior uses his superior athleticism to succeed from much closer to the basket.

When the Longhorns needed a boost Friday night, Roach attacked. He scored six straight points in a span of 1:20 early in the second half to help Texas start pulling away from UT-Arlington en route to a 76-56 victory at the Erwin Center.

Texas (8-4) led by just six early in the second half against a smaller, over-matched opponent. Then Roach, who has been erratic but leads the team in scoring, made three driving shots, giving the Longhorns a 14-point lead.

“That’s who he needs to be,” Texas coach Shaka Smart said. “He’s worked a lot on his ability to make 3-point shots, but he’s always gonna be a guy who has a special ability to attack the paint.”

Texas might have discovered a useful reserve. Hamm, a 6-8 sophomore forward, had played in only three games — a total of 24 minutes — this season before Friday. His 10 points and two blocks in 13 minutes were career-bests. His playing time has increased the last two games in part because former starter Jericho Sims has struggled all season.

Hamm said he tried to exercise patience during his time on the bench.

“Not listening to outside voices, just your loved ones, friends and family,” Hamm said. “Taking advice from the right people.”

Jaxson Hayes, the Longhorns’ 6-11 freshman, made his much-anticipated first start but spent chunks of the game in foul trouble. He finished with four points, four rebounds and two blocks in 16 minutes. Hayes did hit both of his shots, extending his streak to 18 in a row over the last four games.

The Longhorns were typically unimpressive on offensive, shooting 42 percent. They converted only 6-of-21 3-point attempts (28.6 percent).

On one Texas possession early in the second half, 6-9 forward Dylan Osetkowski missed three layups, each time retrieving the rebound. His fourth attempt was blocked by Andres Ibarguen, UT-Arlington’s tallest starter at 6-5.

“If we get 30 or more, it’s amazing, we average scoring about 20 more points than in games when we are in the 20s,” Smart said. “You might say, ‘what does that have to do with the ball going in?’ But it’s about our juice level, our energy level. When we are able to impact the game on the defensive end, it helps us score.”

Said Mitrou-Long, “I think that’s the one thing we came out and did. We focused on the defensive side more than our offense.”

Edric Dennis led UT-Arlington (4-9) with a season-best 23 points and had eight rebounds. He made six 3-point baskets. Brian Warren scored 12.

First-year coach Chris Ogden, the former Longhorns forward and assistant to Rick Barnes, has a team that lost its top nine scorers from last season.

“We fought them for awhile, but the early part of the second half they stretched on us and beat us to a couple of loose balls, knocked down some shots,” Ogden said. “They separated and it was hard to get it back.”