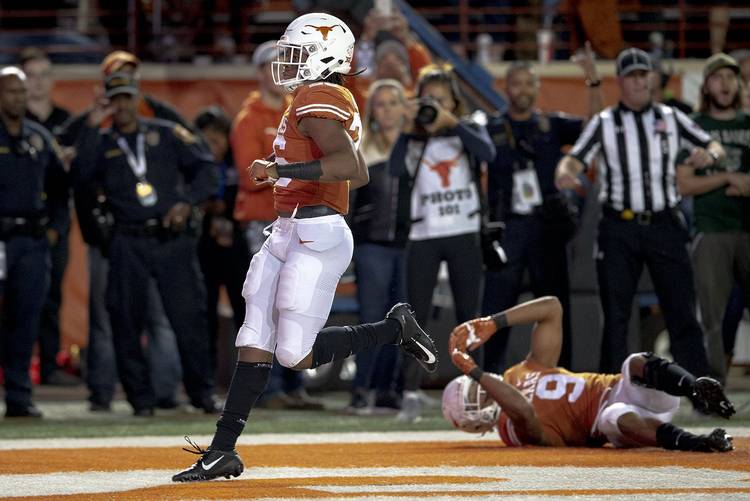 Texas running back Keaontay Ingram (26) runs for a touchdown during an NCAA college football game against Iowa State in Austin, Texas, on Saturday, Nov. 17, 2018. [NICK WAGNER/AMERICAN-STATESMAN]

NEW ORLEANS — Texas running backs Tre Watson and Keaontay Ingram figuratively split the carries down the middle this season. Watson, the graduate transfer, has 167 while Ingram, the hot-shot freshman, has 133.

“It’s Heisman. I definitely truly think so,” Watson said Friday at UT’s practice headquarters on the Tulane campus. “He’s a great player. Being so young and doing the things he does, it’s unreal. I wasn’t there as a freshman, so I know it’s shocking to see somebody like that.”

Watson said as long as Ingram continues to follow running backs coach Stan Drayton, “He has a great shot at being the best back in the country.”

Texas started the year with seven scholarship running backs. But it was clear early on that only three would get the bulk of the playing time. Watson, Ingram and sophomore Daniel Young all got chances early. As the season wore on, Watson and Ingram rotated for most of the games.

One of those seven, Toneil Carter, has been released from his scholarship and transferred. He did not have a single carry all season.

“It’s not like high school where we can do 40 carries every game and be OK,” Watson said. “This is a tough physical game, and guys are stronger, bigger, faster. You definitely have to share the load and stay fresh. That’s the key, is being fresh when you go on the field and being persistent when you’re out there.”

Watson was a huge recruiting gift for coach Tom Herman’s club. He was a veteran, an experienced ball-handler from a Pac-12 school (California) who also scored three receiving touchdowns this season at UT.

Ingram was considered the superstar recruit in the 2018 signing class after scoring a school-record 76 touchdowns at Class 4A Carthage. He missed the USC game but still has rushed for 683 yards and three touchdowns.

Herman has said that he can’t wait to see how Ingram performs after a full offseason with strength coach Yancy McKnight. The Horns need him to be true game-breaker in 2019. The Longhorns’ longest run from scrimmage this season: Just 39 yards.

SEC strength?: Most Texas players laugh at the idea the Big 12 isn’t as good or strong as the SEC. “The Big 12’s got some big dudes,” linebacker Gary Johnson said.

The Longhorns’ offensive line is the one that must contend with the Bulldogs’ defensive front. Georgia was tied for 12th in the SEC in sacks this season, however. Center Zach Shackelford totally dismissed any notion that Georgia is a better team simply because it plays in the SEC.

“They’re very big, they’re fast, they’re physical. We’ve seen that before,” Shackelford said. “As you progress, ballplayers are ballplayers. They have some special guys up front, for sure. But at the end of the game, we’ve got to go out there and execute.”

Still the underdog: No. 15 Texas is still considered a double-digit underdog against No. 5 Georgia, according to oddsmakers. According to linebacker Malcolm Roach, nobody outside the UT locker room ever gives his team a chance to win anything.

“Every game since I’ve been here, the public hasn’t given us a chance to win. Look where we’re at now,” Roach said.

Reporters blurted out that everybody expected Texas to beat Tulsa. “You think so?” Roach added.

Still, the Horns know this is a major chance to get a 10th win and reassert themselves on the national stage. Just like the Texas Bowl was a major step forward last season, Roach said, the Sugar Bowl is the same thing this year.

“We were tired of being down,” Roach said. “We wanted to come out here and make a name for ourselves. The brand always had a name for itself with so many legends coming through. We wanted to make our name.”

Horns visit hospital: Herman along with UT’s five team captains visited the Ochsner Hospital for Children on Friday after practice at the Superdome and saw families with children of all ages, including some still in cribs.