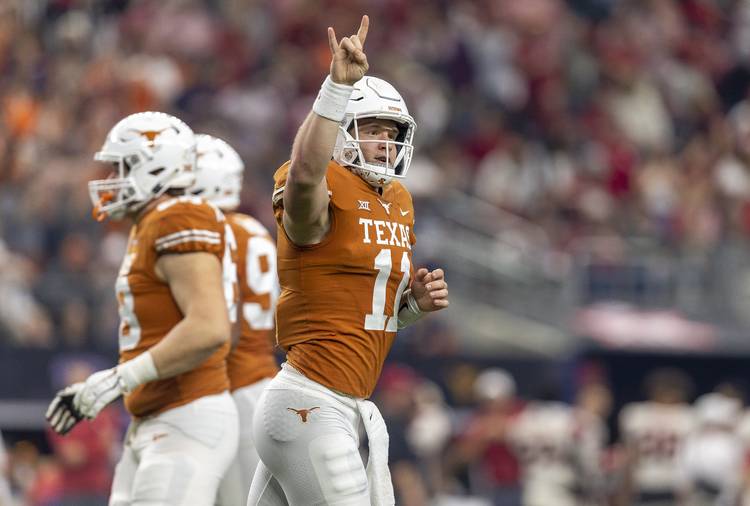 Texas quarterback Sam Ehlinger celebrates a touchdown against Oklahoma in the first half of the Big 12 Conference championship game Dec. 1. [Stephen Spillman for Statesman]

NEW ORLEANS — If Texas wins a Big 12 championship or gets into the College Football Playoff in 2019, there’s one specific moment you can look back on and pinpoint as the defining decision of coach Tom Herman’s tenure.

It wasn’t naming Sam Ehlinger the starting quarterback before the season opener against Maryland. It was Herman’s decision to keep Ehlinger in the starting lineup against Tulsa.

After the disastrous 34-29 loss at FedEx Field, it would’ve been easy for Herman to pull the rip cord, bench Ehlinger and give junior Shane Buechele the nod in week two. Few would have questioned that logical move. After all, the sky was falling.

The fact that Herman didn’t switch quarterbacks could be the lone decision that set No. 15 Texas (9-4) on a path to Tuesday’s date with No. 5 Georgia at the Sugar Bowl.

“I could imagine for Sam that definitely boosted his confidence,” receiver Collin Johnson said. “I know the team never wavered on him as well.”

Offensive coordinator Tim Beck likened it to getting a flat tire. “You going to cut all four of your tires because one of them is flat? You don’t do that,” Beck said. “OK, we had a flat tire. We lost to Maryland. Let’s change the tire, and we’ll keep going.”

The players, coaches and staff all believe in Ehlinger, Beck said. “I’m sure glad that he’s our quarterback going into this ballgame for sure,” he said.

Ehlinger did throw two fourth-quarter interceptions against the Terrapins, including one that sealed UT’s fate with 1 minute, 4 seconds remaining. Here we go again, UT fans screamed. Late, game-deciding turnovers were the hallmark of his freshman season.

But Herman insisted that Ehlinger spent the offseason working on tight game situations. How can anyone really know until the bullets start flying, right?

Ehlinger proved his coach right. He wouldn’t throw another interception until week 12 against Kansas, setting a school and Big 12 record with 308 pass attempts without a pick in the process. His 3,123 yards this season rank sixth in school history, and Ehlinger is now the program’s undisputed leader for 2019.

“When the decision was made that I was his starter and the team’s starter and that I didn’t need to worry about any of that, it just implies so much confidence,” Ehlinger said. “From a preparation, from a performance, from a leadership standpoint, everything changes.”

Herman took a lot of heat for both the Maryland loss and his comments immediately afterward. “A lot of people are going to want to say this feels a lot like last year. It doesn’t to me,” Herman told an incredulous group of reporters. The coach added that Texas was “a better team now than we showed.”

The next Monday, Herman was asked point-blank about switching quarterbacks.

“I don’t think now’s the time to do that; I really don’t,” Herman said Sept. 3. “Certainly Sam didn’t play perfect, but nobody did, and his errors weren’t egregious enough to merit just dumping him on the depth chart.”

It was practically rocket fuel for the sophomore from Westlake High School.

“When he gave me his sign of confidence and his sign of let’s go get it done, I think that definitely helped imply a confidence in me to understand that he believes in me,” Ehlinger said. “He’s been around a lot of good quarterbacks. He’s known for coaching quarterbacks really well and helping them perform to the highest of their abilities. To get that absolutely instilled confidence in me.”

Ehlinger played with a passion that’s seldom been seen from a Texas quarterback this decade. He was less of a gunslinger but as aggressive as ever. Ehlinger found Johnson, Lil’Jordan Humphrey and Devin Duvernay in space and threw balls to spots where only they could reach them.

And Ehlinger used his legs, piling up 72 rushing yards and three touchdowns against Oklahoma in Dallas. Using a package known as “quarterback power,” Ehlinger ran straight at the Sooners and smiled as he jumped into the end zone.

Ehlinger has 13 rushing touchdowns this season and needs only one more to tie the school record for a UT quarterback.

“He’s a winner. You can see the passion he brings to the game just by the film we watch,” Georgia defensive back Tyrique McGhee said. “We noticed that early on. He’s going to get his guys going, and he’s going to be the juice they need. Even if they don’t have it. I think he’s a great quarterback.”

Georgia defensive end Jonathan Ledbetter got visibly excited when talking about facing Ehlinger. The Bulldogs (11-2) legitimately respect what they see from the Longhorns’ triggerman.

“I don’t want to say too much, but we’re pretty big,” Ledbetter said with a smile. “So If he wants to lower his shoulder, I’m good with it. I’m not shying away from any contact. Salute to him, but we’re going to fight out there, man.”

Ledbetter said he loves quarterbacks unafraid to go after it. “Man, he’s a hungry guy, and I definitely respect it. He’s a competitor,” he said.

A midseason shoulder injury didn’t really stop Ehlinger. He suffered a sprained AC joint in his throwing shoulder early against Baylor. That’s when Buechele made his season debut. Ehlinger returned to make two beautiful throws against Oklahoma State and finish out the regular season, leading Texas to the Big 12 championship game.

After UT lost to Oklahoma at AT&T Stadium on Dec. 1, Herman’s body language told the entire story. He was a volcano trying not to erupt. Then Ehlinger grabbed everyone’s attention. “I will make it my mission to never let this team or this school feel this disappointment again,” he said.


Herman patted Ehlinger on his thigh pad under the table. The coach and his quarterback knew there would be more battles ahead together.

If Texas wins the Sugar Bowl, Ehlinger instantly becomes a Heisman Trophy contender in 2019. The Horns would become a preseason Top 10 pick.

But who knows what would’ve happened without Herman’s resolve on Labor Day?

“For us right now, we understand that we have a brilliant opportunity,” Ehlinger said, “to continue to prove to ourselves that if we play really well, we can compete with these type of teams and get Texas where it needs to be.”

Roach rediscovers the paint, and the Texas men cruise past UT-Arlington 76-56