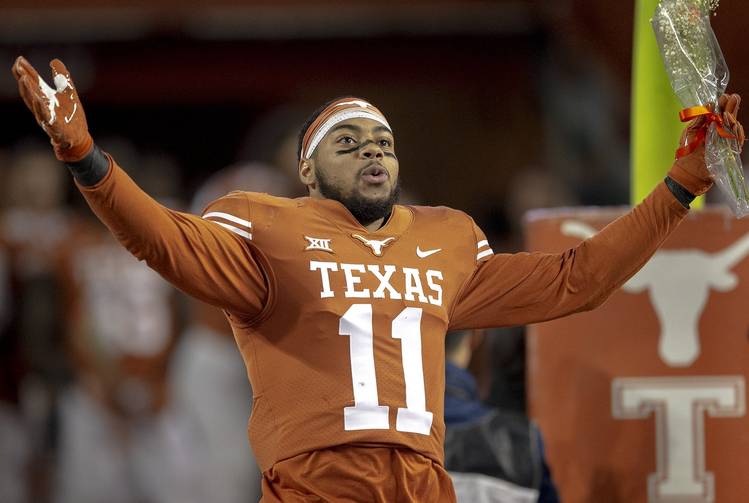 Texas defensive back P.J. Locke III acknowledges the crowd as he is announced during senior night presentations before the Iowa State game last month. [NICK WAGNER/AMERICAN-STATESMAN]

Locke and other seniors on the Texas football team got to enjoy first-class comforts on the trip from Austin to Louisiana. Locke made sure to take plenty of pictures and videos, and a photo of him wearing sunglasses while reclining was published on his Instagram and Twitter. As the caption stated, Locke was ready to “talk business.”

If Locke reaches the NFL, these first-class work trips might continue. Maybe not so much if he turns the physical culture and sports degree he earned this month into a career as a personal trainer in the mold of ex-UT running back Jeremy Hills. But as Locke turns his attention to a temporary job in the sugar business — more specifically, Tuesday’s Sugar Bowl — this type of transportation will have to do.

“It’s definitely a business trip,” Locke said. “The further it was from the game, we wanted to enjoy some time and enjoy the venue and the city of New Orleans. (But) we came with one objective, and that’s to win the game.”

Georgia raved Sunday about the physical play in Texas’ secondary. Physical defensive backs aren’t unusual, but UGA offensive coordinator Jim Chaney was impressed that the Longhorns could keep it up all game long. Receiver Terry Godwin noted that his upcoming opponents are both fast and physical.

“Us being physical as well, we love that type of game. We love a physical game,” Godwin said. “We know we’re going to go out there and be physical; we want someone to be physical with us. We want a great matchup, and we feel like that’s what Texas is going to give us.”

Locke has contributed to that physical reputation. Tulsa running back Corey Taylor II can be used as a reference for that. Back in September, Locke forced a fumble by Taylor with a bone-jarring hit that announcers likened to being “shot out of a cannon.”

Locke credited the UT coaches’ installation of a physical culture after Tom Herman was hired following the 2016 season. Full-padded and physical practices on Tuesdays during the season have also played a role.

“When they first got here, they said that practice was going to be real physical. We’re going to hit as many times as you’ve ever been in your whole life,” Locke said. “We lived up to that; they lived up to that. They made us embrace that culture.”

The 5-foot-11, 210-pound Locke has been UT’s starting nickel back in nine games this year, and he’s also started at safety twice. Locke ranks third among the Longhorns with his 74 tackles. Additionally, he has forced two fumbles and broken up three passes.

Locke has also found out a new way to contribute as a leader. He was a team captain during his junior year, but he was not among the five players voted into that role this season. Locke told reporters Sunday that his play last year could not command the respect that a captain needed.

But he found a way to make sure his voice was still heard. He maintained a position on UT’s leadership council. He is an elder statesman among the defensive backs who still views motivating teammates and keeping them in line as a duty. As Texas safety Brandon Jones insisted, “We all take pride in everything P.J. says.”

“Not being a captain is not a big thing. I won’t make it bigger than what it is,” Locke said. “I just play my role.”