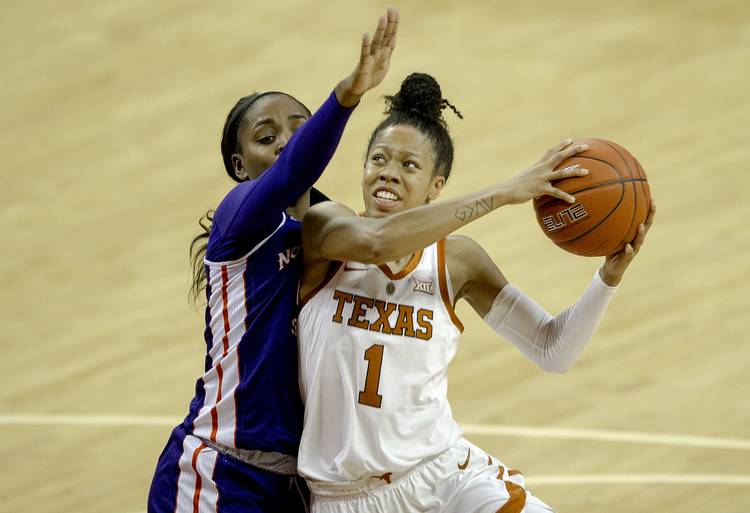 As the women’s Big 12 basketball season beckons, Karen Aston is searching for answers that cannot be found on a stat sheet.

Led by point guard Sug Sutton, the 13th-ranked Longhorns (10-2) have balanced scoring. The are outrebounding opponents by an average of 16 boards a game. But Texas has room for improvement on three-point shooting percentage and needs to clean up its turnover totals.

Texas, which opens its conference season Wednesday with a home game against Oklahoma State, can fix those items.

Now in her seventh season as coach of the Longhorns, Aston has one more ingredient she’d like to see on a daily basis.

“We showed some grit in our tournament in Florida (in November), but grit comes in waves with this group,” Aston said after the Longhorns concluded their non-conference schedule with an easy victory last Saturday against Northwestern State. “We’ve got to find it permanently. I don’t think we’ve found it yet, and I hate to say that.”

Texas won three games in three days in that tournament in Estero, Fla. The Horns, though, have lost home games to Tennessee and Mississippi State, the only Top 25 teams on their non-conference schedule.

Junior forward Joyner Holmes is just beginning to get into basketball shape after missing the first eight games following ankle surgery. Top recruit Sedona Prince could miss the entire season after breaking her right leg during an international game in August in Mexico City. And leading scorer Lashann Higgs suffered a season-ending knee injury in the fourth game of the season.

The goal, though remains the same: Beating Baylor and winning the Big 12 championship.

Destiny Littleton saw some grit when Texas pounded Northwestern State 104-66 on Saturday in the final non-conference tuneup of the season. The sophomore played her best game as a Longhorn, scoring 22 points, showing confidence in her game that was lacking last year.

“We were having fun; you could see us laughing and hyping each other up,” she said.

“We understand that the Big 12 isn’t going to be the same as our pre-conference games. I feel like we’ll flip the switch. I had to learn that practice is the most important thing when it comes to college basketball. You’re not going to get any better if you don’t take practice seriously.”

Sutton describes this team as “a work in progress,” a phrase Aston has used countless times since practice convened in October.

“I think we’re prepared for what’s in front of us,” Sutton said.

In October, Aston said the Longhorns should be much better in February than they would be in the fall. That’s how long it will take for a team that had to deal with three key injuries and the loss of seniors Brooke McCarty and Ariel Atkins to graduation.

By winning 10 of 12 entering the Big 12, the Longhorns have “put ourselves in a really good position” to receive a favorable draw in the NCAA Tournament in March. Another team is to play host again.

“It all starts in practice,” Aston said, “and I think we have a chance to do some really special things.”