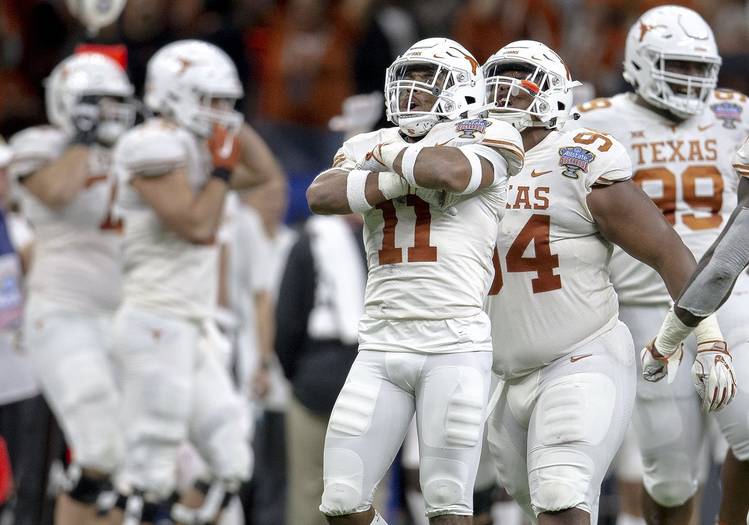 Texas defensive back P.J. Locke III (11) celebrates his interception against Georgia during the Sugar Bowl on Jan. 1, 2019 in New Orleans. [NICK WAGNER/AMERICAN-STATESMAN]

NEW ORLEANS — There were 142 snaps taken in Texas’ 28-21 victory over Georgia in the Sugar Bowl on Tuesday night. Here are five that ended up making a big difference:

One of the very few things that did not go UT’s way was the opening coin toss. Georgia won the flip and deferred its decision to the second half, so Texas opened the game at its 25 after a touchback. The Longhorns marched 75 yards over 10 plays, the last of which was a 2-yard touchdown run by  quarterback Sam Ehlinger.

Ehlinger, Tre Watson and Keaontay Ingram combined to rush for 14 yards on the opening possession. The vast majority of the damage, though, was done through the air. Ehlinger was 5-for-5 on the drive, and he twice completed passes on third downs.

“We talked about starting fast and starting hard and having fun, playing loose,” senior offensive lineman Elijah Rodriguez said. “That was our goal. To go out there and see it happen and be a part of it happening, it was so much fun and just really set the tempo for the rest of the game. We were able to make a statement to each other, to our brothers, that we are who we say we are. We’re blue-collar workers. We’re physical, we love each other, we love the game of football.”

In nine of its 14 games this season, Texas scored on its first possession. Those early strikes accounted for 55 points. The Longhorns had four first-possession scores last year.

Georgia couldn’t match UT’s score on its first drive, but the Bulldogs appeared to pin Texas at its 7-yard line on the game’s first punt. That play, however, was surprisingly sent to the review booth. Officials then ruled that Georgia punter Jake Camarda’s knee had touched the ground while he was fielding the low snap.

That ruling meant that instead of a 52-yard punt, Camarda had been dropped for a 14-yard loss. Texas instead took over on the Georgia 27. Four plays later, Cameron Dicker gave the Longhorns a 10-0 lead with a 37-yard field goal.

Texas went up 17-0 on the first play of the second quarter when Ehlinger scampered into the end zone on a 9-yard run. That score was set up by Ta’Quon Graham’s forced fumble of Georgia running back D’Andre Swift, the all-SEC running back who was limited to just 12 rushing yards on the night.

Swift’s fumble was pounced on by Texas defensive lineman Gerald Wilbon, who calls nearby Saint Rose, La. his hometown. Wilbon is one of the Louisiana products on UT’s roster.

Baton Rouge native Malcolm Roach produced four tackles in the Sugar Bowl. Junior defensive lineman D’Andre Christmas-Giles, who is from New Orleans, did not play but exited his hometown stadium with the win.

Leading 20-7 at halftime, Texas opted to try an onside kick to open the second half. (The Longhorns were kicking off from midfield after Georgia was flagged for unsportsmanlike conduct after the first half’s final play). The Bulldogs, though, recovered Dicker’s kick.

Georgia was unable to make anything of a drive that began at its 41. The Bulldogs did move into UT territory but Jake Fromm was intercepted on a third-down attempt. On the play, Texas senior P.J. Locke III undercut a deep post thrown to Jeremiah Holloman.

PJ Locke in the right place at the right time. #Hookem pic.twitter.com/PzV8l4CPjl

The interception was Locke’s first since his sophomore season. Normally the Longhorns’ starting nickel back, Locke had dropped back to a safety position with Caden Sterns sidelined by a knee injury.

Following a scoreless third quarter, Texas opened the final frame with a first down at Georgia’s 11. After a false start and an incomplete pass, Ehlinger ran the ball on six straight snaps. The Sugar Bowl MVP finally got into the end zone on his sixth try.

Ehlinger’s last four runs came from the Georgia 1. His final attempt was on fourth down. Was there any doubt that he would eventually bulldoze his way into the end zone? “No, not with that guy carrying it,” Texas coach Tom Herman said at his postgame press conference.

Ehlinger became only the second quarterback to rush for three touchdowns at the Sugar Bowl, which was first played in 1935. (Oklahoma’s Jack Mildren first accomplished that feat in 1972). He ends his sophomore season with 16 rushing touchdowns, a school record for quarterbacks.