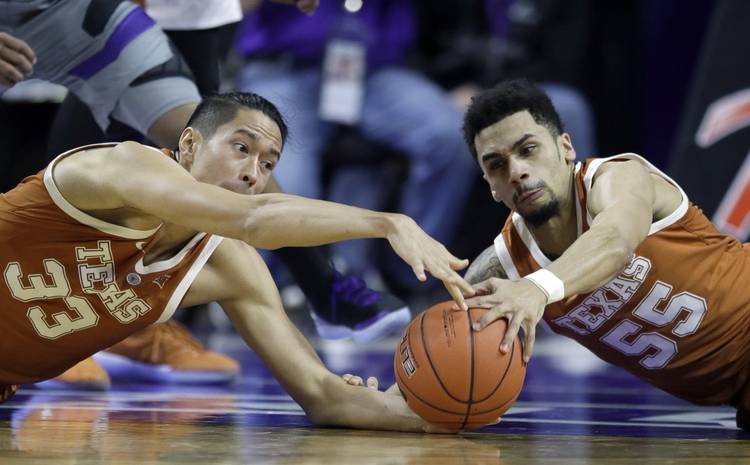 Texas forward Kamaka Hepa (33) and Texas guard Elijah Mitrou-Long (55) go to the floor for a loose ball during the first half of an NCAA college basketball game against Kansas State in Manhattan, Kan., Wednesday, Jan. 2, 2019. (AP Photo/Orlin Wagner)

MANHATTAN, Kan. — Tinkering with the starting lineup is always a coach’s prerogative, but it’s tricky alchemy. It’s the players’ attitudes that are combustible.

The offensive explosion inside Bramlage Coliseum late Wednesday was a sign Smart’s on to something. Hayes splattered the place while Febres turned it into a shooting gallery in a 67-47 win over Kansas State in both teams’ Big 12 opener.

Hayes, who ended 2018 by hitting 18 consecutive shots, melted up with an aggressive first half and nearly posted a double-double. He finished with nine points and 11 rebounds. Hayes tipped loose balls to teammates and had two sensational blocks that will get Big 12 coaches’ attention.

Does he like starting? “Yes sir. I like it. I like it a lot,” Hayes said with an ear-to-ear grin. “I need to have the same mentality I have when I was coming in off the bench. I just need to bring energy off the tip.”

Febres started every game but one during non-conference play. His 3-point shooting capability has never been a question, but Febres has been an up-and-down performer.

Does he like coming off the bench? “Honestly, it’s a fight with myself,” Febres said. “A lot of people can let getting taken out of the starting lineup or not playing as much affect you.”

Febres started 17 games last season as a freshman. He rocketed to fame with 18 points in a wild first half against Baylor. But that was really his lone season highlight. He can’t let this be the highlight of his sophomore year, either.

“It takes a lot of maturity,” Febres said. “Of course, no one wants to get taken out of the starting lineup, but the coaches know what they’re doing, obviously. I think last year really helped me understand that I need to always stay ready. Your name can be called any time, and you need to come up big.”

Febres said he plays for Texas, not for himself. He’ll likely come off the bench Saturday in Texas’ Big 12 home opener against West Virginia. “It’s nothing because I know that regardless if we get a team win and I play the right way, you’re going to get noticed,” he said. “Continue to play the right way.”

Of course, wicked-hot shooting covers up all manner of sins. Smart even joked that “we tend to be feast or famine from 3.” On this chilly night, Texas was 14-for-27 from 3-point range — for a dazzling 51.9 percent, thanks to Febres.

“We wanted to start conference and the new year off right with a win,” Roach said. He had 10 points in 21 minutes despite two early fouls that limited his playing time. “We scouted good, played them good and shoot, shots were just falling tonight. And we won by 20.”

The last 10 minutes was as good as this team has played in weeks. It probably matched the second half of the Arkansas win or the North Carolina victory. This was nothing like Radford or Virginia Commonwealth.

Coleman penetrated and looked for Hayes or kicked it back outside. He had seven assists, Coleman’s highest total since the season opener. On the opposite end, he was diving for loose balls and keeping K-State guards in check.

Courtney Ramey (four points) kept things moving and made decisions that won’t register on the stat sheet. In fact, Coleman, Ramey and Roach all had chances to score when they did penetrate and gave the ball up too quickly.

Smart said teams are so worried about lobs to Hayes, they’re practically daring the Texas guards to score right down Broadway.

“You’re used to in that situation the defender running up, but they’re not doing that,” Smart said. “So we worked on that the last three days. Hey man, you drive in there and he stays back, go finish the ball. Those guys are capable of doing that.”

It’s unclear what kind of shape Kansas State will be in for the return matchup in Austin on Feb. 12. Dean Wade, the Big 12’s preseason player of the year, is out with a foot injury. The Wildcats (10-3, 0-1) were also without Kamau Stokes, a surprise absence. He also has a foot problem.

You take Big 12 road wins wherever you can and don’t ask questions.

“The biggest thing for us going into the new year, and we talked about this a lot as a team, is just consistency,” Smart said. “That’s an area where we need to continue to grow.”