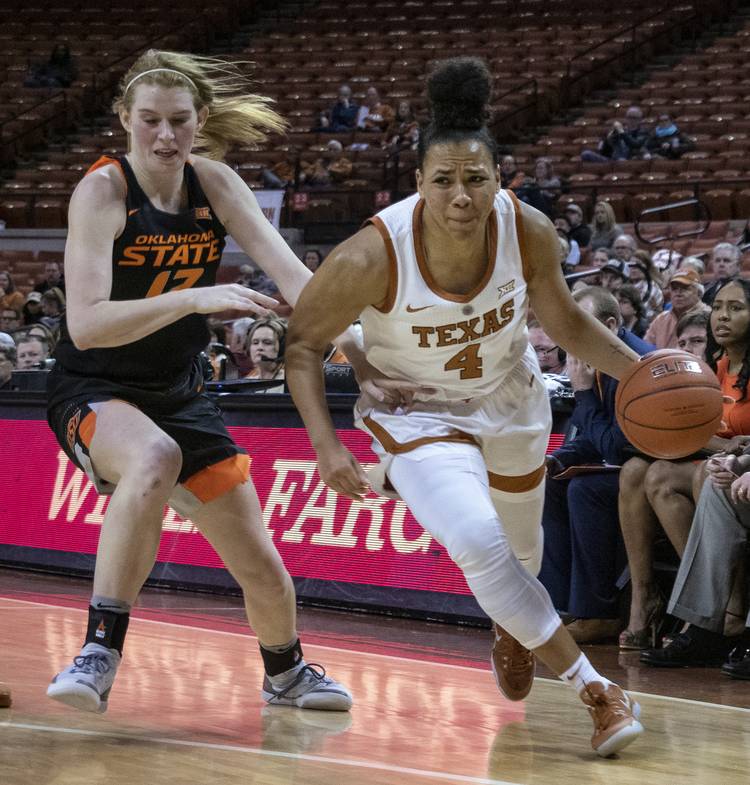 Texas Destiny Littleton, (4) drives to the basket past Oklahoma State Vivian Gray, (12) during the first half of NCAA college basketball game, Wednesday Jan.2, 2019, in Austin, Texas. [Rodolfo Gonzalez for STATESMAN]

Senior forward Olamide Aborowa was rewarded for her defensive tenacity in practice by starting for the first time in her Texas basketball career.

Ironically, it was UT’s defense that made up for some sloppy offensive play in the Big 12 opener Wednesday night against Oklahoma State. With point guard Sug Sutton leading the way, the Longhorns overcame a late OSU rally to post a 60-51 victory at the Erwin Center.

“I thought it was really important for us to get off to a good defensive start, and Mide was a big part of that,” Karen Aston said. Aborowa had played in 76 games off the bench before making the surprise start.

Advertisement
Indeed, UT’s defense helped the Longhorns overcome a shaky overall game. The Horns had 25 turnovers — 17 in the first half — and shot just 33.9 percent from the field.

On a positive note, Oklahoma State was held to a season-low 51 points. The previous low came during a 71-59 loss to UCLA last month.

Sutton was the game’s top performer. She scored a team-high 14 points to go with 4 rebounds and 5 assists. Yet she admitted her team’s inability to be patient led to its turnover problems.

“We need to be making the plays simple,” she said. “Like (Aston) we were trying to hit too many home runs.”

That’s when the Cowgirls woke up.

Led by guard Braxtin Miller, OSU went on a 15-0 scoring run during a seven-minute stretch of the fourth quarter. A three-pointer by Braxtin with 1:40 to play cut UT’s lead to 52-47.

Texas shooting guard Destiny Littleton broke the drought with a pair of free throws, her only points of the game, to stop the onslaught. Joyner Holmes, Danni Williams and Jada Underwood combined for five free throws in the final 40 seconds to secure the victory.

Aston: “I don’t think we panicked and that’s a good thing. There have been times before that we have.”

OSU coach Jim Littell said he was proud of his team for making a comeback, but criticized the players for committing 22 turnovers. He also said the “difference in the ball game” was UT’s 18-11 edge in offensive rebounds.

“It was kind of an ugly game for both teams when you have 47 (combined) turnovers,” he said. “We can’t come in and expect to get a win against Texas when we turn it over that many times.”

Texas nearly lost its 20-point lead in the fourth quarter before stringing together a few defensive stops. Sutton, the team’s vocal leader, said the Horns cannot afford to have similar breakdowns as the Big 12 race continues.

“We have to change our mentality a little,” she said. “Sometimes we get into the habit of being up by a lot and we get to chill. It’s going to take time to get over that habit but we were composed (in the fourth quarter) tonight.”