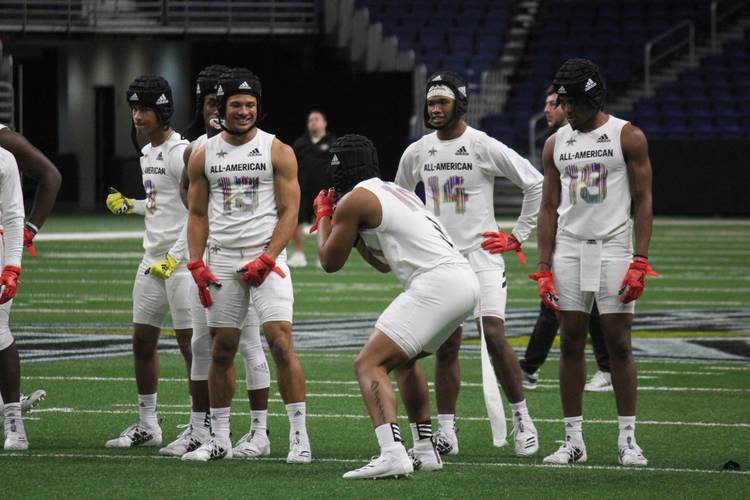 SAN ANTONIO — Jordan Whittington stays busy. The four-star wide receiver from Cuero signed his national letter of intent with Texas on Dec. 19 and then broke Eric Dickerson’s record for rushing yards in a state title game two days later in the Class 4A Division I state championship game.

Whittington, as he does so well on the field, takes it all in stride.

“It’s been an exciting and overwhelming month for me,” Whittington said after practice in the Alamodome on Wednesday. “I have new goals and that’s what I’m focused on now. I have big goals.”

Whittington remains modest about his record-breaking performance at AT&T Stadium against Texarkana Pleasant Grove. He scored six touchdowns in the game, rushing for 377 yards. He also recorded 11 tackles and earned MVP honors on both offense and defense. It was all for Cuero.

“It wasn’t about me. It was about winning, and the record and awards came with the win,” he said. “The best players should perform best in big games.”

Whittington has been joined in San Antonio by a pair of future UT teammates. Outside linebacker De’Gabriel Floyd of Westlake Village in California has already moved to Texas and is ready to enroll for the spring semester. He’s playing inside linebacker for the West squad and expects to contribute early in his Longhorns career with Anthony Wheeler and Gary Johnson departing.

“Rover is still the plan, but (Todd Orlando) told me to be ready to learn,” Floyd said. “I’m excited to move around and play different spots. It’s a huge advantage to be one of those players who is blessed with the skill set to evolve with the game and play multiple positions.”

Floyd was all smiles following Texas’ win in the Sugar Bowl.

“Texas had everything,” he said. “I have family from Austin. I feel like I have a family atmosphere with the coaches and the players. It’s a great system for me and I have a chance to make big things happen right away.”

Four-star safety Tyler Owens is the third player in San Antonio who signed with Texas. The tall, rangy safety flew under the radar prior to the summer. His stock exploded his senior season and he ended up ranked on the 2019 Fabulous 55. He’s proving why in San Antonio, recording four interceptions during practice on Wednesday.

“I want to prove I was overlooked,” Owens said. “It’s pretty cool playing against all these talented players. I know I’ll get better, and I’m hoping to prove I belong amongst the best.”

The recruiting circle requires time and means. Not every prospect can travel to elite camps or play in the 7-on-7 circuit. Owens caught the attention of the Texas coaches at an event on campus in the summer. He was offered, and his senior film proved why the Longhorns sought his talents.

“I’d probably tell myself to get out there more, but there are a lot of people out there that can’t get out to those camps and have access to the same exposure,” Owens said.

Five-star athlete Bru McCoy makes his college destination public Saturday during the game. He indicated that his letter of intent was signed and delivered, so all that remains is the announcement. He’s playing wide receiver at the all-star game, though he plans on playing offense and defense in college.

McCoy is down to USC and Texas with the Trojans the expected choice  — 88 percent of the 247Sports Crystal Ball picks are for USC.

The Dotted Line: The next batch of Texas targets react to Sugar Bowl win