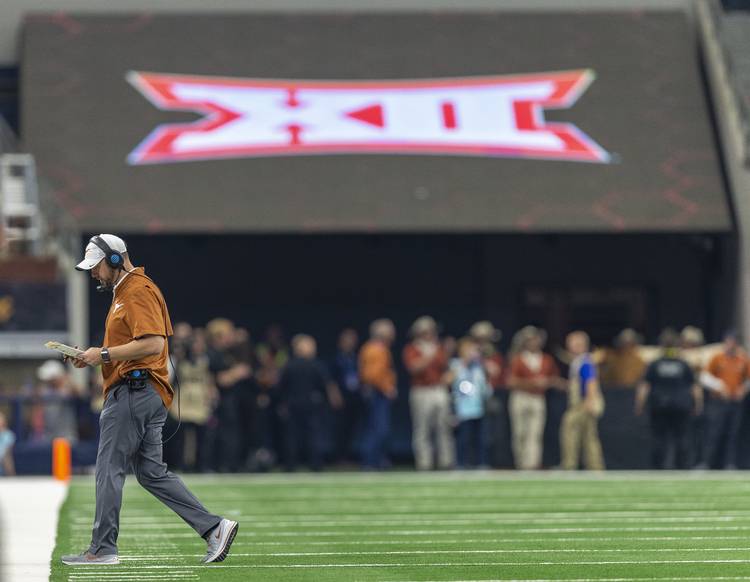 Texas head coach Tom Herman exits the field after a timeout in the first half of the Big 12 Conference Championship NCAA football game at AT&T Stadium in Arlington, Texas, Saturday, Dec. 1, 2018. [Stephen Spillman for Statesman]

LSU comes calling to Royal-Memorial Stadium next season, and the Longhorns will make a trip  to Houston before opening Big 12 play in 2019. Here’s a look at next season’s schedule with some early thoughts what Texas can expect:

Finally, a team other than Maryland. The Bulldogs, based in Conference USA, went 8-5 this season and reached the Hawaii Bowl. The Horns should find this warmup much easier than the Terrapins. This will be the first time the schools have met.

Coach Ed Orgeron brings the Tigers to Austin first in this intriguing home-and-home matchup (Texas plays in Baton Rouge in 2020). The Tigers may have a new quarterback if Joe Burrow leaves for the NFL, but they’ll still have a ridiculously fast SEC-style defense.

This is more for recruiting in Houston than anything else. The Owls went 2-11 this season, a precipitous drop from their 10-4 campaign in 2013. Texas coaches always love playing in recruiting hotbeds, like Dallas and Oklahoma. This is a layup.

Mike Gundy avoided his first losing season since 2005 with a win in the Liberty Bowl. Running back Chuba Hubbard returns, along with Tylan Wallace and a slew of receivers. OSU should have a physical secondary. Here’s betting this is a stiff challenge in the Big 12 opener.

The Mountaineers have lost head coach Dana Holgorsen and quarterback Will Grier. So to say it’s a program in transition is an understatement. Junior linebacker David Long, the Big 12 defensive player of the year, is also jumping into the NFL draft. Who knows how this will turn out?

How good exactly is coach Lincoln Riley? We’re all about to find out. After producing back-to-back Heisman Trophy winners, you have to think OU returns to earth in 2019. School officials just boosted Riley’s package to keep him in Norman. When it’s that time, OU will be ready.

Everything about the grass-eating, fun-loving Les Miles is intriguing. Unfortunately for Miles, he’s still dealing with former coach David Beaty’s talent base. Not even a coach with a national championship on his résumé can change the roster that much in one offseason.

Casual Big 12 fans probably stopped paying attention to Gary Patterson’s club after the Horned Frogs fell in the standings. But did you see what TCU did in November? The Frogs won four of the last five games and finished 7-6, a huge compliment to the culture in Fort Worth.

Legendary coach Bill Snyder has finally stepped aside, paving the way for a new era in Manhattan. Chris Klieman spent the last five years leading North Dakota State, which is a powerhouse FCS program. He’s taking over what was the lowest-scoring team in the Big 12.

It looked odd when longtime Des Moines Register columnist Randy Peterson suggested that Cyclones stars David Montgomery and Hakeem Butler should turn pro. Their decision remains up in the air. But Matt Campbell is one of the nation’s best up-and-coming coaches.

Baylor fans believe in quarterback Charlie Brewer, and there’s a whole bunch of things to like about Matt Rhule’s program going forward. A 45-38 win over Vanderbilt in the Texas Bowl could be a huge slingshot for Baylor into 2019.

Offense was never the issue for former coach Kliff Kingsbury, and the defense actually came around this season. He got dismissed mostly because Tech was far too inconsistent. New coach Matt Wells went 44-34 the last six years at Utah State. This one’s in Austin, though.

The Dotted Line: The next batch of Texas targets react to Sugar Bowl win