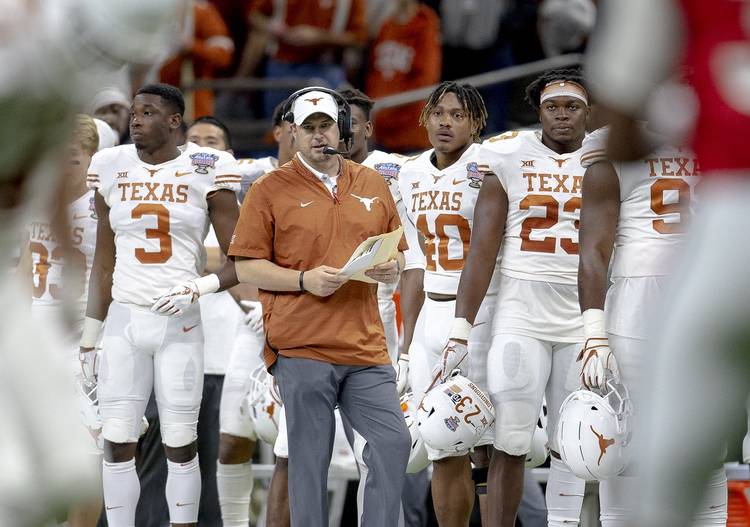 The final chapter of a football season usually has a foreshadowing tone. And there will be a proper dissertation of Texas’ personnel for 2019 soon enough.

But Texas fans would be remiss if they didn’t acknowledge what has happened the last two months, not just in the Sugar Bowl.

A do-or-die attitude in Lubbock, battling to reach the Big 12 championship game and physically dominating a traditional SEC power all were incredible signs of growth under second-year coach Tom Herman.

“Just really proud of the physical nature in which we played this game,” Herman said after the 28-21 win over No. 5 Georgia. “At this point in our program’s trajectory, that’s what we’re going to need to do to win. We have to out-hustle people, we’ve got to out-hit people.

“We’ve got to play with a purpose and passion greater than anybody in the country. And tonight, I feel like we did that.”

In retrospect, they’ll cringe about that two-point conversion against West Virginia. Or how nobody picked up the corner blitz against Oklahoma. It’s a team that was well within shouting distance of 11 or 12 wins.

As senior defensive end Charles Omenihu said, “This ain’t the end goal for this university.”

Texas faces serious personnel questions on defense. The entire starting defensive line is gone. The Longhorns have produced the Big 12’s defensive lineman of the year in back-to-back seasons — Poona Ford (2017) and Omenihu (2018). Nobody is an obvious candidate for that honor in 2019.

Texas needs someone to follow the path set by Ford and Chris Nelson at defensive tackle. The Longhorns also need a starting defensive end who can average more than two tackles per game and get taken out on passing downs.

Defensively, they’re losing seniors all over the board. Gone are linebackers Gary Johnson and Anthony Wheeler and both starting cornerbacks Kris Boyd and Davante Davis and nickel back P.J. Locke III.

The final statistics from the Sugar Bowl were rather illuminating, though.

The leading tackler? Freshman Joseph Ossai had 6.5 stops. Freshman cornerback B.J. Foster was outstanding, getting two tackles for loss, one pass breakup and a huge forced fumble. Sophomore Ta’Quon Graham made his presence felt with two tackles and a forced fumble.

“I think we’ll get into that stuff after this game, after we get a chance to decompress, after we have one more run at the second signing date,” defensive coordinator Todd Orlando said in New Orleans. “And then we’ll look back, and we’ll start looking at the (film) cutups. We’ll start looking at individual players and say, ‘OK, this is what he really does well. This is what he doesn’t.’ And we’ll modify that way.”

The offensive line is the biggest question mark on the opposite side. Texas is losing starters Calvin Anderson (left tackle), Patrick Vahe (left guard) and Elijah Rodriguez (right guard). This unit was incredibly healthy in 2018, which was fortunate. There’s not rock-solid depth there.

Don’t take your eye off the freshman quarterbacks. Cameron Rising and Casey Thompson both put their name into the NCAA transfer database, meaning they can explore a transfer. Rising sure didn’t look like someone who wanted to leave immediately after the Sugar Bowl.

If it’s the offseason, that means it’s time for more “Shane Buechele may transfer” rumors. At this point, it’s comical. Buechele has never expressed his long-term plans publicly. Since he played in only two games, he will get a redshirt year in 2018.

Buechele could transfer and have two years of eligibility left. However, he would have to sit out one year by going that route. The smart play, if he does want to leave, is to stay and get his UT degree and then leave as a graduate transfer. That way he could play immediately elsewhere.

Starter Sam Ehlinger, who will be a junior next season, isn’t going anywhere, that much is certain.

“The confidence in this man exudes to the offense and the whole team,” Omenihu said. “I’ve commended him so many times. And I’ll commend him again for just being the guy he is and the way he because it’s really been transcending and inspiring to everybody on this whole team and the whole university.”

Texas has plenty of skill position players. Herman has commented on how excited he is to see running back Keaontay Ingram’s growth after a full offseason in the weight room. Receiver Collin Johnson has already announced he’s coming back. Lil’Jordan Humphrey has yet to make his announcement.

Right now, it’s too hard to gauge whether Oklahoma or Texas would be Big 12 preseason favorites. The Sooners are not expected to have quarterback Kyler Murray, but anything is possible these days.

All that’s certain is Texas is now a team on the rise. Nobody thought the Horns would win 10 games this season. Few will pick them to reach the College Football Playoff in 2019, too.

Bet against Herman and the Longhorns at your own peril.

“They’ve got a pretty good head start on everybody, I can tell you that,” Herman said of Alabama and Clemson. “It’s going to take multiple years of recruiting classes like they’ve had in the last half-decade or so, and then it’s going to take the development of those great players.”

The 2019 recruiting class ranks ninth nationally. Several players in that group are instant contributors, like Arizona receiver Jake Smith and Cuero’s Jordan Whittington. The schedule looks favorable, even with LSU coming to Austin. It’s just a matter of whether Texas can keep the train moving.

Herman was emphatic in New Orleans. “We feel like we’re on track.”