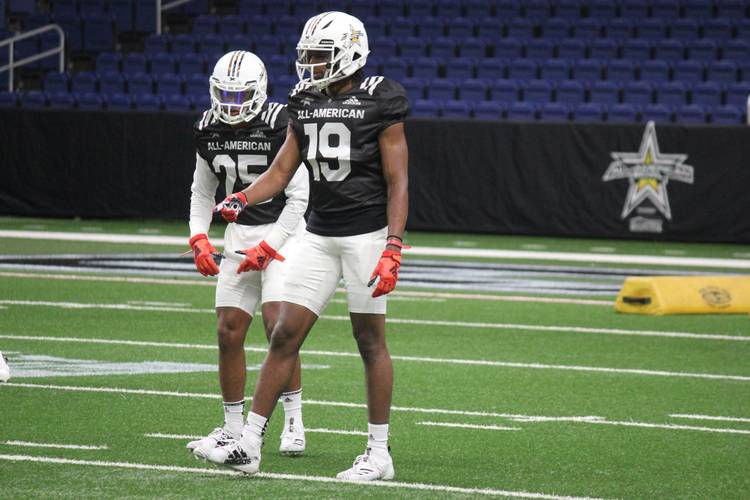 Texas signee Tyler Owens was one of three future Longhorns in the All-American Bowl. (Mike Craven)

Texas signed 21 prospects during the early signing period in December. Four-star safety Tyler Owens didn’t receive the same headlines as his West teammates De’Gabriel Floyd and Jordan Whittington heading into the All-American Bowl at the Alamodome on Saturday.

Owens left San Antonio with a new reputation. The Plano East product impressed throughout the week of practice and put an exclamation point on the week with a stellar performance amongst the nation’s best, even though his West squad fell 48-13.

“My only goal was to prove that I was overlooked in this process. Too much is placed on the camps and in 7-on-7, but not everybody has access to that,” Owens said. “It should be about who can play football. I think I proved I’m one of the best here this week.”

Owens intercepted four passes in one day of practice. His range and ball skills impressed everyone in attendance.

“That dude can ball and he’s going to help us win a lot of football games,” Floyd said. “All of the rankings disappear now. We’re all college athletes. The playing field is level.”

Owens entered the summer before his senior season as a relatively unknown prospect. That changed during the Stars at Night event on Texas’ campus in July. His only Power Five offers up to that point were from UCLA, Baylor, Missouri, Vanderbilt and Kansas State. Tom Herman offered on July 29. He committed on Sept. 24.

“Texas was the right place for me,” Owens said. “I love the idea of playing the Joker position or at deep safety. The freedom given to the Joker is great because you can play the run or in pass coverage. I pride myself on being a physical safety.”

It was a quiet day for Floyd and Whittington. All-star games aren’t built for linebackers. There isn’t a ton of running, no blitzing is allowed, and any zone coverages are prohibited. Floyd is already in Texas and enrolls in less than two weeks. He recorded two tackles.

Whittington caught a pair of passes in the first half, but the West couldn’t anything going offensively due to constant pressure from the East’s defensive line. Whittington also enrolls early at Texas and hopes to play a role like Alvin Kamara from the New Orleans Saints.

Five-star athlete Bru McCoy picked USC in the fourth quarter of the game. He was a top target for the Longhorns in the 2019 cycle. He played wide receiver in the game, but plans on participating on both sides of the ball in college.

The California product decided to stay home once Clay Helton was retained as head coach for the Trojans. Adding Kliff Kingsbury as offensive coordinator didn’t hurt the cause, according to McCoy.

The city of Austin was represented by wide receivers Garrett Wilson and Jaylen Ellis. Wilson caught two touchdown passes and finished with a team-high four receptions for 89 yards in the second half. He’s enrolling early at Ohio State, while Ellis is off to Baylor in the summer.

Looking ahead: If Texas keeps its 2018 resilience, then 2019 could be just as successful