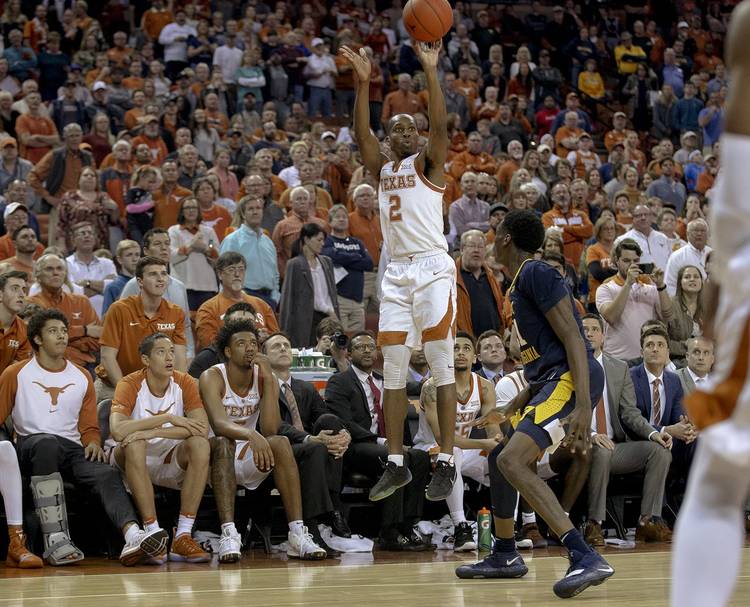 The coach has long believed this point guard held the key to championship-level success — be it at Virginia Commonwealth, Texas, wherever. That’s probably why Smart is harder on Coleman than any other player.

At Texas, the sophomore guard has rarely been the type of player who will solely take over games. That’s not his persona. “Matt wants to be liked,” Smart has said numerous times.

Coleman was the best player on the floor in the closing minutes Saturday night against West Virginia. He threw an alley-oop lob pass to Jaxson Hayes for a slam, hit a clutch step-back 3-pointer and drilled two free throws to ice a 61-54 win at the Erwin Center.

“We’ve always said he’s at his best when he plays with joy,” Smart said. “That allows him to be really aggressive and confident. The fine line is I’m on him all the time about details, with his game and with our team. If you allow it as a player, that could take some joy from it.”

Coleman finished with a team-high 17 points on 6-of-10 shooting and had three assists and no turnovers in 35 minutes. This came three days after he dished out seven assists and went diving after loose balls against Kansas State.

His 3-pointer with 1:03 remaining was perhaps the most un-Coleman-like moment of the season. Coleman isn’t a pure long-range shooter. His most comfortable spot is at the top of the key.

Dylan Osetkowski whipped the ball to him on the far right wing with about 10 seconds left on the shot clock. Coleman dribbled the heck out of that thing looking for a way out. Then, he just jumped back and buried a shot over WVU’s Wesley Harris. That gave the Horns a five-point lead.

“I knew I needed to make something happen quick and fast and precise and get a shot up,” Coleman said. “Thank God it went in.”

Speaking of Osetkowski, he made a big defensive play on the next possession. Osetkowski went up and swatted away Esa Ahmad’s baseline jumper with 42 seconds left. He finished with 14 points on 4-of-5 shooting with seven rebounds after flying under the radar for several weeks.

“You were at (Big 12) media day,” Osetkowski said. “You remember that comment coach (Bob) Huggins made. I told you then that I had this game circled.”

“Well, that’s what you were known for,” Huggins told him.

Osetkowski: “Yeah, I’m going to be known for my game this year.”

Huggins: “I don’t believe it.”

The 65-year-old Huggins, known for his gruff demeanor, likely was teasing Osetkowski. But the senior from San Diego was truly miffed.

“Yeah, he needs to move on from that,” Smart said before reconsidering. “We’ll take whatever motivation we can get.”

Numbers wise, the game was fairly even. West Virginia had a 29-28 edge on the glass, but Texas got five more free throw attempts. Neither team shot the ball well from long range. Texas was 6-for-16 from downtown while West Virginia was 5-for-20.

The difference was in the middle. The Mountaineers (8-6, 0-2) were without big man Sagaba Konate, a premier shot-blocker. Coleman and Elijah Mitrou-Long (10 points) weren’t afraid to drive the lane and look for layups or kick-outs.

Hard to imagine Kerwin Roach II flying into the lane for a massive tip-in with 4:15 left if Konate is patrolling the middle, but alas, he wasn’t. Huggins also benched redshirt freshman Brandon Knapper for what he termed “conduct unbecoming of a West Virginia basketball player.”

Ankle sidelines Sims: Sophomore Jericho Sims did not play against the Mountaineers and could be out several weeks with a severe right ankle sprain. Smart said the big man was “out indefinitely” after stepping on a teammate’s foot in practice.

Sims had an MRI exam on Saturday morning that revealed no major damage.

Where’s Hepa? Smart said matchups were the reason 6-foot-9 freshman Kamaka Hepa did not play Saturday. Opposing teams have gone straight at the native Alaskan when he’s been in the game.

“There’s nothing wrong with him. He’s doing a good job,” Smart said. “We just felt like matchup-wise, the guys we had in made sense. But he’ll play (Tuesday) against Oklahoma State.”

The Dotted Line: 2019 stars offer recruiting advice to next batch of prospects