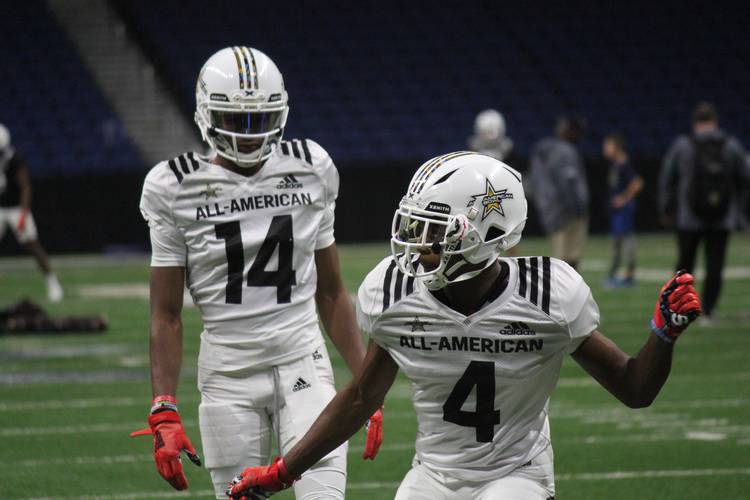 SAN ANTONIO — No two recruiting paths are the same. It’s an individual journey for a teenager that includes multitudes of variables from socio-economic ones to something as simple as location. The ride tends to start in a player’s sophomore year as recruiting letters and questionnaires trickle in and it intensifies as offers and options become available as juniors.

The All-American Bowl in San Antonio was a celebration of sorts. Nearly every prospect in attendance was signed or committed to a school by the end of the game on Saturday. The week-long event was an award for making it to the finish line of the recruiting process. The spoils were swag and television time.

Most recruits say the two best days in recruiting are the day they receive their first offer and the day they sign. It’s the process in between that stresses out the kids, parents and college coaches. The options were unlimited for a guy like five-star wide receiver Garrett Wilson of Lake Travis.

“I had no expectations going into the process. It ended up being a blessing, but it was hectic. It was a good problem to have,” said the Ohio State signee. “It is super important to fall in love with the program. Love the coaching staff, but make sure you love the place you’re going.”

Wilson is the No. 1-ranked player on the American-Statesman’s Fabulous 55. The No. 2 player is Converse Judson defensive lineman DeMarvin Leal. The Texas A&M signee committed back in April, as did Wilson, highlighting a trend. Junior years are now the money year for prospects and colleges. It’s usually too late come senior season.

Some of that is the early signing period. Some of it is that prospects can now take official visits in the spring of their junior season instead of waiting until senior year. The pressure is on college coaches to impress these young guys early or miss out altogether. Jimbo Fisher did an excellent job of understanding that in the 2019 cycle and it’s why the Aggies hold the third-ranked class in the nation.

“The process was good for me. Be humble through the whole thing, listen to your elders and take that wisdom,” Leal said. “Ask questions and trust the people around you. Be as aware of what is going on around you as possible.”

Not every prospect starts in the spotlight. Round Rock Cedar Ridge wide receiver Jaylen Ellis is a three-star who didn’t blow up on the recruiting trail until he posted a 10.4 100-meter dash at a district track meet at the end of his junior year. The big offers followed despite his commitment to Baylor. He ended up sticking with Baylor and signed on Dec. 19.

“When people tell you it’s a hard, tough process, they’re not lying,” Ellis said. “I can tell you from experience. Take your time with it and figure out which schools actually want you, not the ones you want. Go to the one that wants you.”

Four-star tight end Austin Stogner was among the dozen members of the Fabulous 55 in San Antonio. He also committed as a junior. The Prestonwood Christian product sees the recruiting process turn into a circus and warns future prospects against letting the noise interfere with the goal.

“You can control your process and how crazy it gets,” said the Oklahoma commit. “Don’t let the coaches control you and make you fly around all the time. Enjoy high school and your time with your friends. Do your research, but don’t be on the move all the time.”

With injuries piling up elsewhere, Texas looks to stack up more wins early in Big 12 race