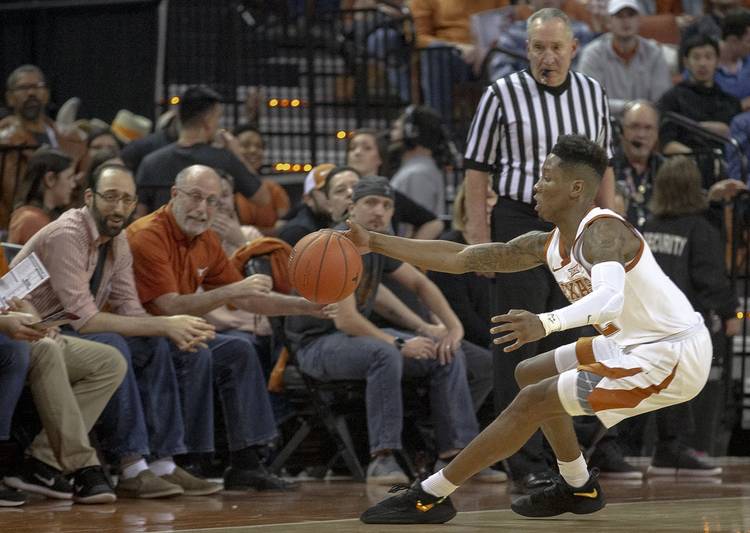 Texas guard Kerwin Roach II (12) saves the ball from going out of bounds against West Virginia during an NCAA college basketball game on Saturday, Jan. 5, 2019, in Austin, Texas. [NICK WAGNER/AMERICAN-STATESMAN]

What’s happening to the big men around the Big 12?

West Virginia’s star center, Sagaba Konate, is out with a knee injury. Coach Bob Huggins said flat-out the Mountaineers can’t “wish him back.”

Now, Kansas’ Udoka Azubuike will miss the rest of the season with a torn ligament in his right hand.

Texas’ Jericho Sims is already out several weeks with a right ankle injury. At this point, UT coach Shaka Smart needs to encase Jaxson Hayes in bubble wrap. Get him one of those bird boxes as a warning system. The Longhorns don’t need more of this plague.

“We don’t need you bringing that up,” Smart said with a laugh — and some side-eye — on Monday.

“First of all, I think Kansas is still a terrific team,” Smart said. He said that when Azubuike is out of the lineup, the Jayhawks actually become a more perimeter-oriented team. “Just from a defensive standpoint, that makes them in some ways even harder to deal with.”

Still, Smart acknowledges the Big 12 may not be solely a one-team race this season.

“Anyone that’s discounting (Kansas) is not someone who’s looked at recent history or even not-so-recent history,” Smart said. “But in terms of who can contend for the league, I think it’s wide open.”

So what about the Longhorns? This program hasn’t started 3-0 in league play since the 2010-11 season. Smart calls it a 10-week season, and the Horns at least won the opening week.

Let’s look at the positives.

The Horns have one of the league’s better defensive units, allowing just 63.8 points per game. The team’s overall shooting and free-throw shooting has improved, which given the last few years is saying something. Remember, this was a team that was 8-9 in games decided in the last minute or overtime last season.

At 8.2 boards per game, Dylan Osetkowski is the second-best rebounder in the league. Thanks to an array of dunks and close-range layups, Hayes is the league’s No. 1 shooter (.761). Kerwin Roach II and Jase Febres are both capable of big scoring flurries, too.

“Every game is going to be a battle,” Osetkowski said Saturday. “It’s the Big 12, we know that. It’s going to be an up-and-down game, a game of runs.”

The negatives are well known.

Texas is easily capable of going into long scoring droughts, perhaps as many as 4-5 minutes long. It’s not a consistent rebounding team, as evident by West Virginia’s first-half surge on the glass Saturday night. The Horns have shown a propensity for silly fouls of late.

“It’s all about which team can understand what goes into winning and get past hard to bring those things to bear on a consistent basis,” Smart said. “For us, we try to do that in bite-size pieces. (Tuesday) night, we play a very hungry, aggressive Oklahoma State team.”

The Cowboys were picked to finish last in the Big 12, but this isn’t an automatic win for the Horns by any stretch. OSU climbed back from a 12-point deficit to beat Texas at Gallagher-Iba Arena last season.

It’s unclear whether Oklahoma State’s Mike Cunningham will play. One of OSU’s better long-range shooters, Cunningham, a 6-1 senior guard, was suspended for an undisclosed violation of team rules along with Kentrevious Jones. Cunningham is averaging 8 points per game and shooting 44.4 percent from 3-point range.

Getting to 3-0 is critical given UT’s next three opponents. The road gets considerably tougher with games against Texas Tech (Saturday), at Kansas (Monday) and Oklahoma (Jan. 19).

The Dotted Line: 2019 stars offer recruiting advice to next batch of prospects

The Dotted Line: Texas’ recruiting board, needs on offense for 2020