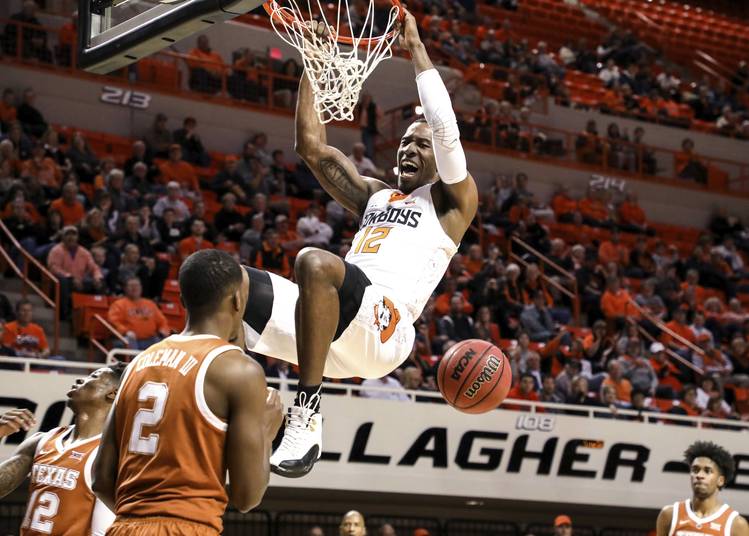 One or two steps forward, then two, four or maybe a half-dozen steps back.

Such is life for these Longhorns, who started off 2-0 in Big 12 play for the first time in eight years and then lost Tuesday to the league’s only team with a losing record.

Oklahoma State earned every bit of its 61-58 win at Gallagher-Iba Arena. The Cowboys (7-8, 1-2 Big 12) led from start to finish, building up a 19-point lead along the way. A closing flurry by the Longhorns (10-5, 2-1) is something to talk about in film study later this week. In the end, it was window dressing.

Simply put, this was an embarrassment for the group from Austin. It’s a loss the Horns will beg to have back come NCAA Tournament time.

“I think whether the guys want to own up to it or not, myself included, I think we were a little satisfied being 2-0 to start conference,” senior Dylan Osetkowski said. “We came in sluggish, not really respecting Oklahoma State like we should have.”

Now in his fourth season at UT, Smart simply has no idea which team will show up — the one that beat North Carolina or the one that lost to Radford. He can’t even bank on his best athletes. Maybe they’ll play like stars for stretches, maybe a full half, maybe a full game, maybe not.

Smart, who is 60-55 with the Horns, doesn’t know who will live up to this “identity” he talks about incessantly for Texas basketball.

“Tonight, we didn’t have five guys that wanted to live out that identity,” said Smart, who gave the Cowboys and coach Mike Boynton full credit for the win. “I’ve got to find five that’ll do it. We’ve made some strides in that area, but today was definitely a significant step back.”

Texas was 2-for-22 shooting from 3-point range and couldn’t match OSU’s energy and “juice,” as Smart likes to say, until it was far too late. OSU’s Lindy Waters III had 19 points, nine rebounds and hit five 3-pointers. Three others Cowboys finished in double figures as OSU was 8-for-19 from 3-point range.

“We just came out slow,” senior Kerwin Roach II said. “When things got tough, we just really folded up and cowered up and just didn’t really respond well when it came to the hostile environment.”

To call it a slow start is being polite. Texas needed 10 minutes, 31 seconds to score 10 points. The Horns opened the game 4-for-15 shooting and 0-for-6 from downtown. The Pokes went on a 12-2 run capped by Cameron McGriff’s two-handed dunk after his team shredded UT’s pressure defense.

“On that specific possession, McGriff beat us down the floor,” Smart said. “We didn’t, as we say, ‘fix it’ as we needed to. That was just an indication of where we were in the first half.”

Texas managed to commit five turnovers in the last 2:05 before the break. Freshman Courtney Ramey threw the ball out of bounds after some miscommunication, and then he dribbled it off his foot. By halftime, Texas was 0-for-9 from 3-point range.

The Horns started the second half with “juice.” Roach (18 points) threw down a dunk to cap an 8-2 run to get it going. But minutes later, he was called for a technical foul for slapping at the ball and talking to an OSU player, according to Smart. Asked what he did, Roach said, “I honestly do not know.”

Royce Hamm Jr. lit the Horns’ fire with back-to-back buckets on sheer hustle. Then, Roach hit a 3-pointer, and suddenly it was a seven-point game. Elijah Mitrou-Long threw a terrific pass to Jaxson Hayes (13 points, six rebounds) for a dunk and foul with 6:11 remaining and the OSU crowd got restless.

At that point, OSU’s lead was down to 53-47. But Waters came down and buried a 3-pointer over Jase Febres, and the Cowboys were still in control. Roach, Hayes and Matt Coleman III all scored in the closing minutes to get within one.

Isaac Likekele’s two free throws with 10.4 seconds left were big for OSU, and then Ramey missed a potential game-tying 3-pointer as time expired.

Asked where his team is headed, Waters said, “Going up. Going up the staircase, step by step. We don’t want to skip a step, because then you might slip, might fall down.”

Meanwhile, Texas is the team that’s fallen from the realm of undefeated Big 12 teams. It’d be one thing to lose upcoming games against top-10 foes like Texas Tech (Saturday) or at Kansas (Monday), but this was something different.

“If our guys did take them lightly, then that’s really, really disappointing,” Smart said. “We’ve talked about for three days how dangerous they are, how hungry they are, how hard they are going to play and really emphasized we need to be the best version of us regardless of who we were playing. Obviously in the first half, we were nowhere near that.”

Take any team in this league lightly at your own peril.

“Definitely, I agree with Dylan,” Roach said. “Like he said, we were kind of satisfied coming in 2-0 and kind of expected it to be easy. First half, they came out aggressive and hungry. You could see they were playing desperate. We just didn’t match their aggressiveness.”

The Dotted Line: Texas’ recruiting board, needs on defense for 2020