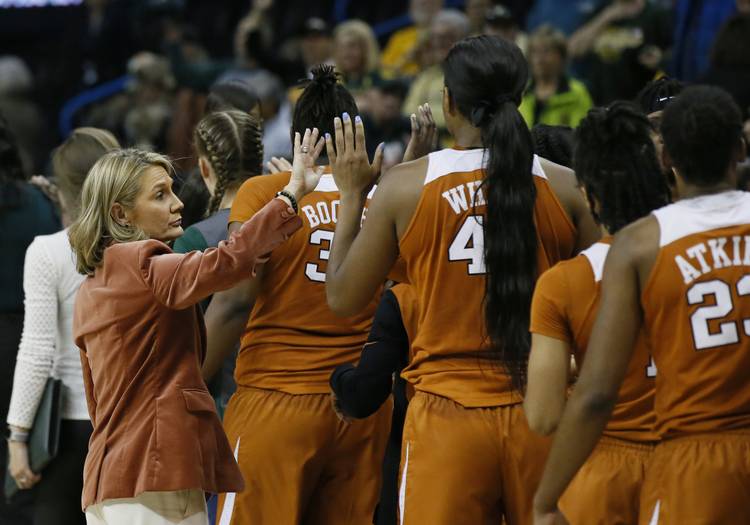 Before Karen Aston joined her players for their weekly film session, the coach had a few words about another team on campus.

The university was still abuzz from the football team’s 28-21 victory over Georgia last week in the Sugar Bowl. Aston, who sits in the stands for most home games at Royal-Memorial Stadium, drew parallels between the football team and her basketball squad.

All sports teams go through peaks and valleys during the course of a season, she told her players. Those who play their best at the end of the year can label their seasons successful.

“When the football team lost to Maryland in the very first game, everybody wanted to write them off. It was fun to witness the final product,” Aston said. “They had a lot of bumps and bruises along the way. When you’re in a long journey, it’s the finished product that you’re trying to get.”

The basketball team should take heart from the football team’s journey. This has been a rough season for the Texas women on and off the court. The 11th-ranked Horns lost home games to Tennessee and Mississippi State, the only ranked teams on their non-conference schedule.

Furthermore, freshman center Sedona Prince broke her leg in August and it appears unlikely she will play this year. Junior forward Joyner Holmes missed the first eight games after having ankle surgery in October. And senior guard Lashann Higgs, the team’s leading scorer, went down with a torn ACL in the fourth game of the season.

“We still expect to win every game — one game at a time,” said sophomore guard Destiny Littleton, the team’s most improved player.

Littleton said the players understood Aston’s comparisons to football. She described football as a “player-led” team that developed strong leaders throughout the season.

The basketball team, which continues its Big 12 journey with a home game Wednesday night against Oklahoma, still has an opportunity to have a memorable season, and Aston has said multiple times that the Horns will be a far better team in March than the group that started the season on shaky ground.

WOMEN’S PREVIEW: No. 11 Texas vs. Oklahoma

Did the coach’s expectations change in the wake of multiple injuries to star players?

“I expect to win and I feel we have a lot of great players,” Aston said. “The next man up really needs to be ready to play. What I’m trying to do is be more patient and I wouldn’t say I’m successful with that all the time. I’ve tried to understand we’re going to have some bumps.”

Among the bright spots for Texas has been tandem point guards Sug Sutton and Littleton. In Sunday’s 70-58 victory at West Virginia, they combined for 35 points, nine rebounds, seven assists and three steals. They also hit five buckets behind the three-point barrier.

No player in burnt orange has been a bigger surprise than Littleton, who scored a total of 17 points in eight games during a forgettable freshman season. After establishing a new attitude and better training habits, she has become a reliable player and one of the team’s best offensive options.

“It got to the point last year where I didn’t want to play basketball anymore,” Littleton said. “The transition to college is hard and it slapped me in the face. … I thought things would be easy and I’d jump back and do everything I had done in high school. I did hit rock bottom but now I’m back.”

Aston said Littleton’s emergence as a capable point guard has allowed Sutton to become more offensive off the ball. After averaging 6.8 points a game as a sophomore, Sutton has increased that to a team-leading 11.4 this season.

“You could see her take over after Lashann got hurt,” the coach said. “She acts like it’s her team now. That needs to happen for any point guard or quarterback. You need to get a few games under your belt before you realize you’re in charge now and this is my team.”

The Dotted Line: Texas’ recruiting board, needs on offense for 2020

Oklahoma State 61, Texas 58: ‘A significant step back’ as Longhorns look all out of sorts