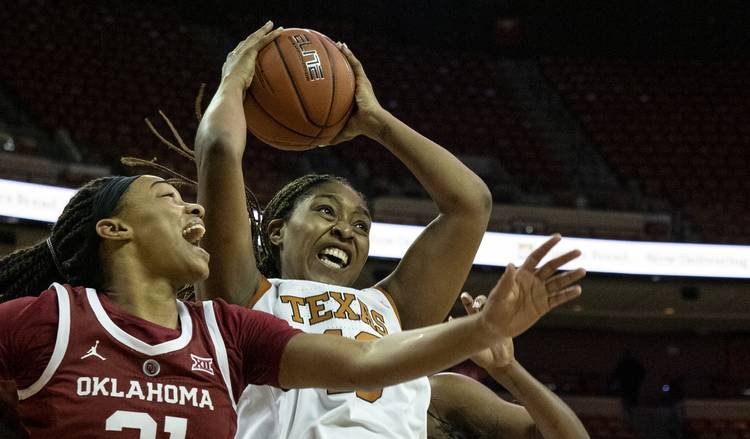 Texas Jatarie White, (40) pulls down an offensive rebound against Oklahoma Nydia Lampkin, (21), during the first half of NCAA college basketball game, Wednesday Jan.9, 2019, in Austin, Texas. [Rodolfo Gonzalez for STATESMAN]

Texas has built one of the best defensive teams in college hoops with a collection of players who are desperate to rebound the basketball.

Karen Aston said she was proud of her team “for weathering a storm” after the Longhorns rallied for a 73-63 victory over youth-driven Oklahoma Wednesday night at the Erwin Center.

The most active player on the floor had a difficult time putting the ball in the hoop. But junior forward Joyner Holmes was a tower of strength in burnt orange and white, collecting 14 rebounds.

Advertisement
“The difference in the game was rebounding, especially in the second half,” Aston said. “That’s when we turned the boards around. Our bench was big, too.”

Texas finished with a 46-30 edge in rebounding. The margin was 26-11 in the second half. For the season, Texas ranks third in the nation (out of 340 teams)  in rebounding, averaging 15.6 boards a game more than its opponents.

Texas was taller, stronger and deeper than its longtime rivals from the other side of the Red River. The combination of 6-3 Holmes, 6-4 Jatarie White and 6-5 Charli Collier finished with 31 boards, one more than OU’s entire team.

OU, which had four freshmen on the court for most of the game, was valiant in defeat, overcoming an 11-point deficit in the third quarter. And when freshman Taylor Robertson drilled a jumper with 7:40 to play in the game, UT’s lead was cut to 61-59.

OU coach Sherri Coale agonized on the bench when shot after shot kept skipping off the rim down the stretch. The Sooners scored just four more points after Robertson’s bucket.

Texas, meanwhile, received a jolt of energy from point guard Sug Sutton, who scored four points in a 30-second span midway through the fourth quarter. And when transfer Danni Williams connected on a three-pointer from the right wing with 2:20 to play, UT’s victory was secured.

No one for Texas played better than White, who scored 13 points on 6-for-9 shooting while collecting nine rebounds. Collier added nine points and eight boards in what Aston said was the best game of her young career.

“We had put in our minds that we were going to dominate the boards,” White said. “We’re obviously bigger than them.”

OU stayed close behind the hot shooting of freshman guard Madi Williams, who had a game-high 18 points. OU led 20-16 after one quarter before Texas began to establish control under the boards.

“It was like déjà vu,” Coale said. “We had Connecticut, the No. 1 team in the country, on the ropes (during a 72-63 loss to the Huskies) right before Christmas and just couldn’t quite make the shots we needed to make in the fourth quarter.”

The Dotted Line: Texas’ recruiting board, needs on defense for 2020