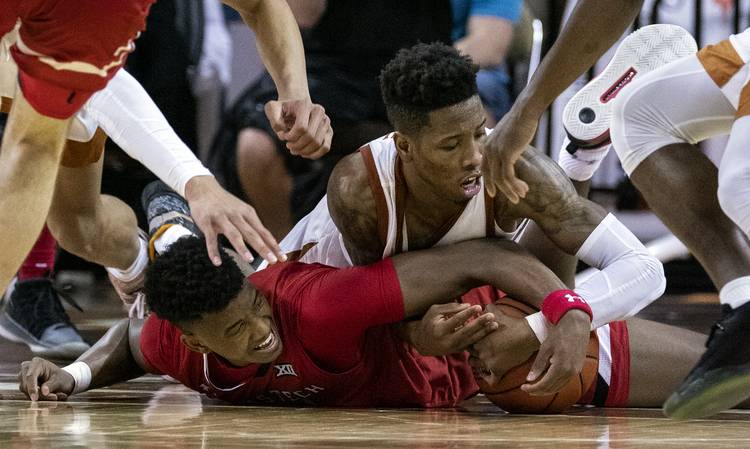 Texas guard Kerwin Roach II, top, and Texas Tech's Jarrett Culver struggle on the floor for a loose ball during the second half Saturday. [Rodolfo Gonzalez for AMERICAN-STATESMAN]

Gerald Myers has been affiliated with Texas Tech in some form or fashion since the 1950s. He’ll die with his “Guns Up.” Once the men’s basketball coach, Myers became the athletic director and ultimately retired in May 2011.

But every year, the 82-year-old still rides the team charter to Austin from Lubbock for the basketball game at the Erwin Center. The barbecue here is just a bonus.

“I wanna be here to see the end of that streak,” Myers said before Saturday’s 143rd meeting between Texas and Texas Tech.

The Red Raiders had not won a men’s basketball game in Austin since the creation of the Big 12 — a streak of 22 games dating back to 1996. That ended Saturday when No. 8 Tech used suffocating defensive pressure to hold off Texas and grab a 68-62 win.

Tech coach Chris Beard accomplished something Bob Knight, Pat Knight, Billy Gillispie, Chris Walker and Tubby Smith couldn’t — win in Austin. It just took 23 years to do it. As for the streak, Beard said, “We might have mentioned it.”

The Longhorns (10-6, 2-2 Big 12) played with far better effort than they put forth Tuesday in Stillwater, Okla. It was a tie game with 8 minutes, 9 seconds remaining. But the Raiders (15-1, 4-0) got a surge of energy from Matt Mooney’s season-high 22 points and big buckets from Jarrett Culver and Davide Moretti down the stretch.

“I would say that we just didn’t respond to their run,” UT guard Kerwin Roach II said. “We just couldn’t get a bucket.”

The announced crowd of 14,070 was pro-Texas, but the noise level was unmistakably pro-Tech. “Raider Power” chants filled the air during UT free throws. Kansas fans now have serious competition when it comes to turning the Erwin Center into a visitor-friendly venue.

“We’re building something special in Lubbock,” said Beard, a 1995 UT graduate in kinesiology. “We don’t apologize to anybody for it. We have a great fan base, Red Raider nation. Been great fans for years. They deserve the kind of program we’re trying to build now, and that’s what we should be doing.”

Business was decided in the four-minute span after Roach threw a lob pass to Jaxson Hayes for an alley-oop dunk. That tied things up at 48-48. At that point, it was anyone’s game.

Roach was all over Culver, who finished with 14 points, but he scored. Then Moretti hit a 3-pointer. Roach tried to throw another lob pass to Hayes, but this time the ball slipped off his fingertips for a miss. Tech went the other way and got a dunk from Norense Odiase.

Jase Febres’ 3-pointer with 6:07 remaining made it a four-point game. But then Culver scored again, and UT responded with back-to-back misses from 3-point range by Courtney Ramey and Elijah Mitrou-Long.

Texas had gotten better looks earlier with dribble penetration. But Tech switched to a zone defense, then to man and sometimes used both on the same possession to keep UT’s mediocre offense at bay.

For Texas, Roach had a team-high 17 points on 6-of-13 shooting. Hayes had 15 points and five rebounds, and Febres tallied up 12. Dylan Osetkowski, a senior who played 25 minutes, managed just one bucket and nine boards.

“Whatever defense they’re in, we have to make great decisions,” Smart said. “Just a big, big difference.”

Tech made 14 field goals in the second half compared with UT’s 11. Matt Mooney alone made the difference. He opened the second half with two 3-pointers, two steals and another bucket, all before the first media timeout. The senior guard was everywhere.

“My teammates got me open, got me some clean looks,” Mooney said. “I knew their game plan on Culver, and I had some open looks. I knew we had to get it going offensively.”

Saturday only highlighted how these are two programs going in different directions.

The Longhorns had a 2-0 start to league play, and Smart couldn’t believe his players would even dream about taking Oklahoma State lightly. After Tuesday’s loss and now this, Texas is 2-2 after two winnable games went awry. A road trip to No. 7 Kansas awaits on Monday.

“Today, I thought we had a few guys that weren’t aggressive enough,” Smart said. “It’s a 40-minute fight. It’s not always going to go pretty.”

Meanwhile, the team in Lubbock is 4-0 with a Top 10 ranking and looking every bit like a legitimate challenger to Kansas’ crown. The Big 12 race feels wide open this season. Why not the Red Raiders?

“It’s so early,” Beard said. “I’ve always said this: Until you make the turn, until we’ve played about eight, nine or 10 games, nothing even really matters.”

“Could we? Yes, we could be,” Beard said. “The first part is kind of embracing that. It’s not arrogance. It’s just the truth. I mean, you’ve gotta believe. If I don’t believe, the players aren’t going to believe. Do I believe we could be one of the best teams in the Big 12? Yes.”