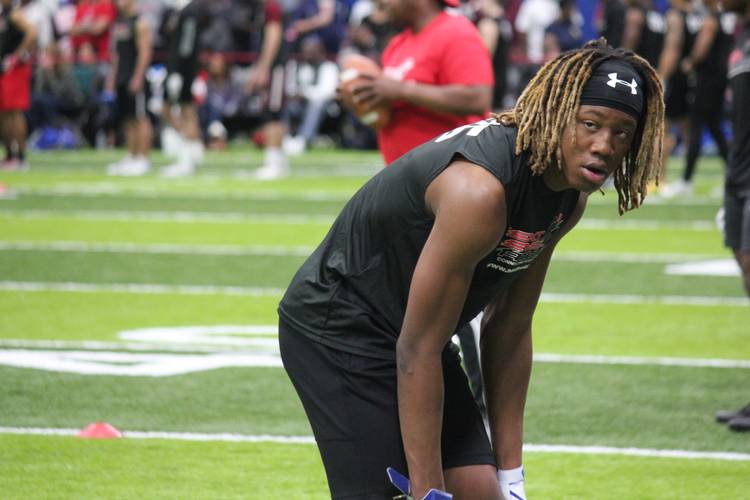 BARBERS HILL — Nearly 250 prospects herded into the indoor facility at Barbers Hill High School early Saturday morning. There were big names there, including 2020 four-star cornerback Jaylon Jones of Cibolo Steele. He measured in at 6-2 and headed back toward San Antonio with the MVP award for defensive backs at the camp.

It was not surprising to watch Jones clamp down receivers and mow through drills. He’s an elite talent holding offers from across the nation. He’s the No. 12-ranked cornerback in the nation and a national top-250 talent, per 247Sports’ composite ratings.

Jones didn’t need to travel east of Houston to prove he belongs to be in the conversation for the state’s top cornerback. He wasn’t there for the onlookers. He was there for himself.

“I like the competition and improving my craft,” Jones said.

He also mentioned an early list of schools leading the charge in recruiting. Texas, Texas A&M, Florida, Arkansas and Purdue would get his official visits if he picked today, he said. Jones plans on taking those official visits in the spring and he sounds like a prospect hoping to commit before his senior season.

“They treat me like family and that’s why where I plan to take my visits,” he said. “I’ll keep evaluating as more offers come in and do my research.”

One potential advantage for Texas in its pursuit of Jones is Caden Sterns. The former five-star safety from Cibolo Steele was teammates with Jones two seasons ago and remains in constant contact with the next big thing from the school.

Jones was not surprised that Sterns made an immediate impact for the Longhorns.

“Everyone in the community knew he’d do his thing. There was a reason he was a five-star. No one expected a true freshman to do that at safety,” he said. “It was excited to see a guy I consider a brother have that type of success. He deserves it.”

Jones grew up a Florida fan. The military brat once lived in Japan. Distance won’t be a factor in determining his destination, but he does have a criteria for a program.

“Good education. I’m not into the hype, so I’m just trying to find a good education and somewhere I can play,” Jones said. “I want it to be like a family. That’s real important to me in this process. I want to be treated like a brother and a family member.”

Kansas 80, Texas 78: ‘For what we want to accomplish, there can’t be any moral victories’