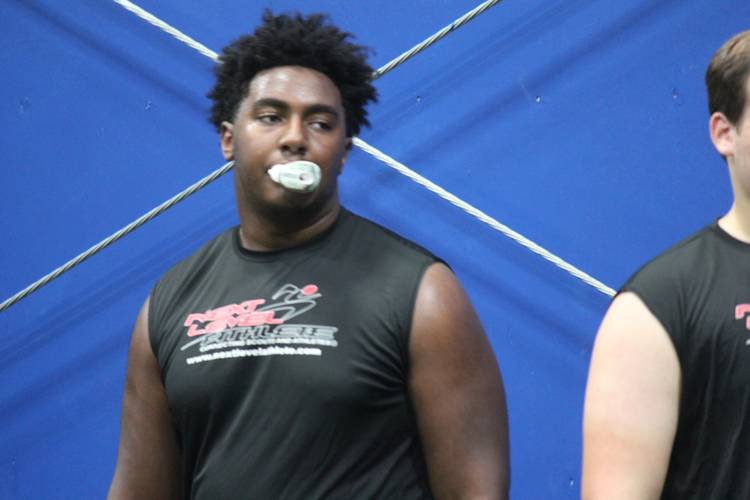 Neither needed to prove anything. Both sophomores hold offers from the Longhorns, Aggies and multiple power programs outside of the state. They’re both ranked as five-star prospects and are among the six 2021 offensive linemen that Texas has already offered.

Camps like these aren’t the ideal setting for offensive linemen since no pads are involved. The young prospects still find uses for the showcases, though.

“Camps allow you to improve on footwork and get good reps in and work on hand placement,” said Jackson, the fourth-ranked tackle in the 2021 class. “It’s a tune-up camp for stuff like The Opening and Under Armour.”

The sophomores know recruiting attention will heat up heading into their junior seasons. The early signing period and the ability to take official visits in the spring of their junior years mean the limelight is moving toward the 2021 class.

“I know that I’ve exposed myself as a recruit and got good offers already,” Conner said. “I want to prove I’m not satisfied and I’m working all the time.”

The two are close, along with fellow 2021 linemen like Bryce Foster and Reuben Fatheree. It’s already safe to assume that a few, if not all of them, end up at the same college.

“Cliques impact recruiting a lot,” Conner said. “I’ve gone to campus with Donovan (Jackson) and Bryce (Foster) a lot, and the competition makes us better.”

“We talk about recruiting all the time,” Jackson said of his relationship with fellow 2021 linemen from his area. “We ask each other questions and always pick each other’s brain about schools.”

Two schools most discussed are Texas and A&M. The 2019 cycle will be the first time since 2004 that Texas, Texas A&M and Oklahoma will finish with top 10 classes in the same cycle. The Aggies’ move to the SEC allowed for both in-state powers to excel without blocking the other’s success. The recruits are noticing the upward trend at both programs.

“Both Texas and Texas A&M being good makes my life harder. It’s difficult,” Jackson admitted. “I feel that it’ll be a hard decision between those two schools. Both are great educations and I can sit back and wait and watch until my decision.”

Conner is on the same page.

“It’s a lot of pressure because they’re both Texas schools that preach keeping Texas talent in Texas,” he said. “I like them both a lot. It’ll be a difficult choice.”