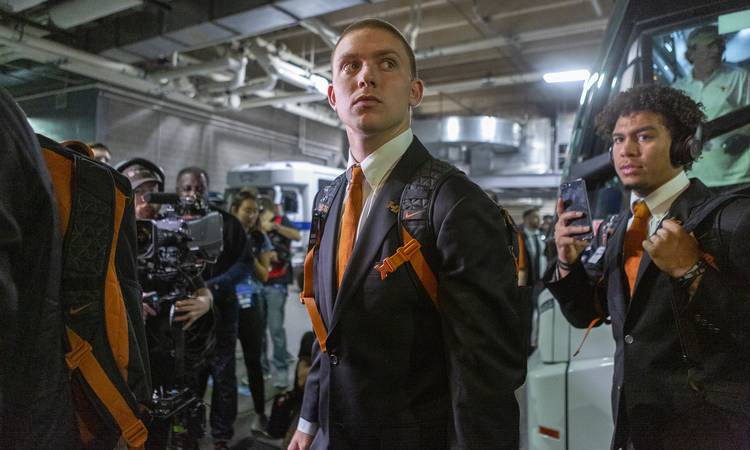 Texas coach Tom Herman planned on five scholarship quarterbacks battling it out this spring. After a whirlwind Thursday, a roll call seems necessary.

Incumbent starter Sam Ehlinger, who was named the most outstanding player in the Sugar Bowl win over Georgia, will return for his junior season. He’s likely a Heisman Trophy candidate.

Backup Shane Buechele, a junior who lost the starting job to Ehlinger last season, put his name into the NCAA transfer database on Thursday, the school confirmed. Buechele has yet to announce his plans, but he’s on track to graduate in May and could leave as a graduate transfer.

Third-stringer Cameron Rising, a freshman from California who redshirted this past season, has informed coaches that he is indeed transferring out, a team spokesman said. Rising visited Utah and announced late Thursday he had signed with the Utes.

Fellow freshman Casey Thompson, who also is exploring a transfer, shot down an Internet report that he has decided to stay at UT. “I hate finding out news from twitter and so should any coach,” Thompson tweeted. “That’s not the right way to do things — it’s unprofessional.”

Meanwhile, incoming freshman Roschon Johnson still plans on enrolling this spring and is scheduled to attend the first day of classes on Tuesday. If the three quarterbacks ahead of him all transfer out, Johnson will rocket up the depth chart just by showing up.

Finally, St. Michael’s quarterback Sam Saxton, a three-star recruit with a long UT legacy, announced Thursday he would be a walk-on with the Longhorns. Saxton (6-5, 190) is ranked as the 38th-best pro-style quarterback in the 2019 class, according to 247Sports’ composite ratings.

“Dream come true, very excited to announce that I will be continuing my athletic and academic career at the University of Texas. #HookEm,” Saxton tweeted. His father, Jimmy, and grandfather, James, both played for the Longhorns.

When Herman took the job two years ago, he knew the Longhorns’ lack of quarterback depth was a critical issue. He was laser-focused on building up quarterback depth. New NCAA transfer rules, implemented in October, could make it tough for any coach to stockpile talent going forward.

Any player can put his name into the NCAA transfer database, or portal, as some call it. The rules are simple. Coaches cannot stop anyone from getting on that list. Once a player’s name is in the database, opposing coaches are allowed to contact the athlete and set up recruiting visits. It’s as close to NCAA free agency as it gets.

Theoretically, Johnson could join the program on Tuesday and put his name into the database and immediately start courting other suitors. The database shifts some power toward the athletes after years of coaches holding almost all the power.

So what’s the catch? If a player places his name into the database, the school is no longer required to hold a scholarship for that athlete for the next season. The coach could dump that player, no questions asked.

Herman was on the road recruiting and unavailable for comment. Given how depth at the position is topsy-turvy, the coach may not be ready to comment anyway. He hasn’t cut ties with these quarterbacks for one simple reason. “Well, one, we want them to stick around,” he said during UT’s Sugar Bowl trip.

Herman allowed Rising and Thompson to participate in team activities in New Orleans and enjoy the win even though both signaled their intentions in mid-December.

“I think this is the way of the world now,” Herman said in New Orleans. “And guys that want to explore their options have that right to do so. We also have the opportunity to communicate with them how important they are to our program.”

Buechele didn’t put his name into the database until Thursday. Calls to his family were not returned. The Arlington Lamar product has not made his intentions known. Buechele has not been made available to reporters since mid-season.

Buechele played only two games this past season, protecting his redshirt. He has two years of eligibility remaining. If Buechele finishes his UT degree in May, he could transfer anywhere, have instant eligibility and two years to play.

Oklahoma coach Lincoln Riley was blasted nationally when he first blocked Austin Kendall’s apparent move to West Virginia as a graduate transfer. OU later relented — only after it was announced that Alabama’s Jalen Hurts was transferring to Norman.

Last August, Herman did not stop cornerback John Bonney, who had completed his UT degree, from transferring to Texas Tech. A coach wanting his 6-6 receiver to line up against someone mired on the depth chart is different from a coach who’s about to watch a highly-recruited quarterback walk out the door, though.

What remains unclear is whether Herman would allow Buechele to keep working out with the Longhorns this spring if the quarterback truly wants to leave. After all, Ehlinger’s hard-charging style opens him up to potential injury; Buechele played virtually the entire Baylor game and the second half against Iowa State in relief of Ehlinger. Coaches would trust Buechele to run the offense in the interim.

Herman left no doubt about the pecking order, though. Prior to the Iowa State game, he was asked whether it would be better to rest Ehlinger’s injured shoulder and go with Buechele.

“We are very confident in Shane Buechele, but there is a reason that Sam Ehlinger is our starting quarterback,” Herman said. “If our best is healthy, we’re going to play our best.”

If Buechele never plays for UT again, he would finish his career with 4,636 career yards, 30 touchdowns and 16 interceptions. The majority of those numbers came in 2016 when he started all 12 games. Buechele and Ehlinger rotated as the starter in 2017.

Longer term, Johnson would be eager to stay should the quarterbacks room empty out. Texas also has a commitment from Lake Travis quarterback Hudson Card for the 2020 recruiting class.

The Dotted Line: Texas is expected to host next batch of 2020 prospects this weekend