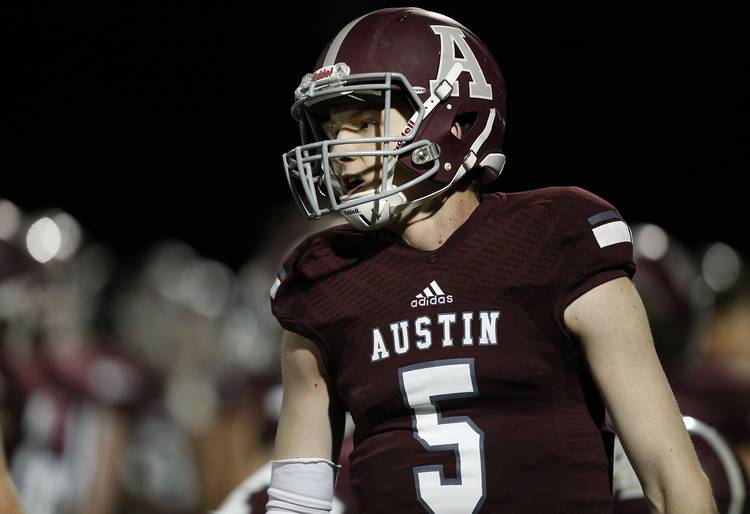 Family trumps nearly everything and three-star quarterback Sam Saxton grew up knowing where his family’s loyalty lies in college football. The grandson of former Longhorns great James Saxton and the son of former UT player Jimmy Saxton, Sam carved his own niche as a quarterback in the Austin area and hopes to do the same at Texas.

The 6-5, 190-pound quarterback finished his career at St. Michael’s Academy after spending time at Westlake and Austin High. He’s the No. 38-ranked pro-style quarterback in the 2019 class, per 247Sports composite rankings. Texas reached out with a preferred-walk on opportunity and Sam never hesitated to achieve his childhood dream.

“Texas football and burnt orange has run in my blood since I was in diapers,” Sam said. “It has always been my dream to put on that jersey.”

Jimmy never wanted to push Texas onto Sam, even before the recruiting process took off. Jimmy followed his own father at Texas and knows what it is like to try and create your own legacy. That doesn’t mean Jimmy wasn’t ecstatic when his son told him that the Longhorns were his choice on Wednesday night. Saxton made it official on Twitter on Thursday afternoon. Sam de-committed from Southern Miss on Dec. 6 and elected not to choose during the early signing period.

“Everyone knows who is grandpa was, and it is a tough decision to play for free,” Jimmy said. “I’m proud of him for taking on the challenge. Some of the people I respected most during my time at Texas were walk-ons that earned scholarships.”

Texas enjoys dual-threat quarterbacks and Sam wants fans to know he isn’t a statue despite the pro-style tag. He’s fully capable of moving around and holds the numbers to prove it on the field.

Sam wants to reach 210 pounds, and thinks the added strength will only help him make his mark at Texas. Most walk-ons are content to stay in the back and hope for a chance. Sam is too competitive and was taught from an early age to go chase dreams and to not wait for opportunity. It’s the benefit of growing up in a house filled with elite competitors.

“My mindset going into Texas is to work as hard as I can and earn the right to play on Saturdays,” Sam said. “I think with my abilities, I can earn a scholarship.”

That said, Sam knows his journey won’t be easy. It wasn’t easy in high school, either. He’s hoped that makes him ready for adversity in college.

“Nothing is easy and I have to prove to everyone that I deserve it,” he said. “But it’s not all about me, I want to put Texas in the best position to win championships.”

It’s another lesson learned from family. The sum is more important than the parts.

“There are personal goals that push you be a better player, but ultimately it is the team goals that matter.”

That lesson also came from a familiar name to Longhorn fans: Sam Ehlinger. Sam Saxton started his prep career at Westlake and considers the current starter at Texas a mentor and a friend.

“He taught me work ethic and a real love for the game,” Sam Saxton said. “I can’t tell you how many hours we spent in the film room getting ready for games.”